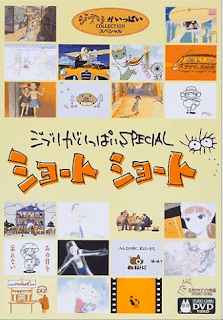 Everyone knows the blockbuster movies for which Hayao Miyazaki and Studio Ghibli are famous – My Neighbor Totoro (1988), Grave of the Fireflies (1988), Kiki’s Delivery Service (1989), Princess Mononoke (1997), and Spirited Away (2001) – just to name a few. What you may not know is that under the guidance of Ghibli producer and president Toshio Suzuki (鈴木敏夫), Ghibli pays the bills between the big movies by doing commercial projects.

For example, Studio Ghibli distributes foreign animation of renown within Japan. Films under the Ghibli label include Les Triplettes de Belleville (Sylvain Chomet, 2002), Le Roi et l’oiseau (Paul Grimault), and Moya Iyubov (Aleksandr Petrov, 2006), among others. The studio is also happy to do television commercials as well as music videos and other commercial ventures.

In 2005, Studio Ghibli released ショートショート(Short Short) as a Ghibli ga ippai special edition DVD. With a run-time of only 42 minutes, the DVD features music videos and commercials produced by the studio between 1992 and 2005.

The thing that I found striking about the commercial work included on this DVD is that it gives one an opportunity to glimpse the artistic style of Ghilbi animators who usually get second billing. Momose has been an in-betweener on several major Ghibli productions, but in recent years he has formed his own studio, Studio Cajino, under the Ghibli auspices and he takes the director’s chair for the Capsule music videos. While the style in these videos is partly influenced by Capsule’s retro-chic look, the character design and futuristic look are quite distinct from the films helmed by Miyazaki and Takahata.

My favourite shorts on the DVD would have to be the nostalgic advertisements for House Shokuhin. They remind me of the nostalgia of My Neighbor Totoro, with their romanticisation of post-war Japan. The theme of the ads is that House Shokuhin’s products (ie. instant curry) will allow your family to enjoy home-cooking just like in the good old days. The warmth of colours and the details of the traditional homes are very inviting and I find the old-fashioned style of the character animation particularly appealing.