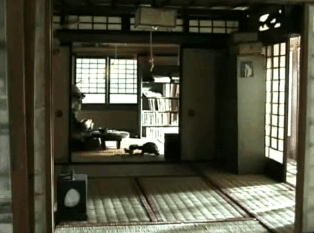 This early claymation film by Tomoyasu Murata (村田朋泰) has an English title and a Japanese title. “Nostalgia” is a theme in most of Murata’s artwork. Sometimes the nostalgia is evoked by the old-fashioned settings of the films, particularly the stop motion work. At other times, the nostalgia is more of a longing for a happier time gone by, before times of trouble, sorrow, and loss.

The Japanese title “Suiren no hito” translates as “Water Lily Person”. This image is specific to this particular film. An image of a pond with water lilies connects the central protagonist with his past. He is an elderly man who is introduced to us in his blue cotton kimono – the kind generally worn by men of a certain age in Japan. His home is a quaint Japanese-style wood house, with sliding doors and tatami. The detail Murata paid to the house is truly remarkable. From the kitchen cupboards to the string hanging from the ceiling lamp, all the details will be familiar to anyone who has spent time in older Japanese homes.

Initially, the soundtrack is quite sparing. Only the sounds of the man shuffling around his house, crickets chirping and an unusual crunching sound “karān karōn karān karōn” can be heard. It is only during the flashback sequence that we learn that it is the sound of geta-clad feet walking on the pebbled earth of a Shintō shrine. The film contains no dialogue; therefore, the sound effects take on a particularly important role in conveying meaning and mood.

As in most of his films, Murata also employs the use of sentimental music in order to heighten the emotional impact of both the scenes with music and the scenes that are silent but for the incidental sounds. The silence of the opening scenes emphasizes the loneliness of the elderly man. One evening he investigates an unusual sound in his kitchen and he discovers a turtle eating a kabu (Japanese turnip). 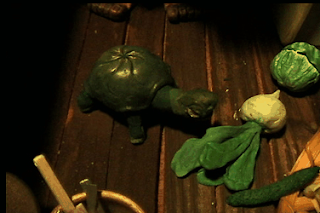 Interestingly, the elderly man does not disturb the turtle but leaves him to enjoy his midnight snack and goes to bed. Turtles are symbols of good fortune in Japan, and this particular turtle seems to function symbolically within the film. He keeps the man company and he acts as a link to the flashback to the man’s dead wife.

The other major symbol and link to the past are the wife’s red kimono and the off-screen sound of geta crunching in gravel. The plot of Nostalgia unravels in a meandering way, with visual (photographs, colours) and aural clues pointing us to the story of this lonely male figure.

Murata gives a nod to Ozu and his contemporaries in the end credits. They are superimposed over a close-up of a blue fabric. This was a common device during the opening credits of Ozu films. Re-watching the film with Ozu in mind, one does notice a similarity in the use of distinctly Japanese mise-en-scene, the film’s sentimentalism, and the camera does often take the low position of Ozu’s films. There are also similarities in Murata’s sparing use of dialogue, music and special effects. Unlike Ozu, Murata is fond of using camera movement and he also often disorients the viewer in terms of time and space.

Although Ozu’s films may inspire a certain kind of nostalgia in Japanese viewers today, I do not consider Ozu to be a particularly nostalgic filmmaker – particularly if comparing him to other Japanese filmmakers like Hayao Miyazaki. Ozu’s characters may be wistful about time past, but there is always a note of acceptance that this is the way life unfolds. There is a hint of that in Murata’s Nostalgia as well, but on the whole I see the film as an elegy to a lost loved one.

Murata won the Excellence Prize for short animation at the 2001 Japan Media Arts Festival with Nostalgia. The film can be viewed on their website.

The film also received recognition at various other film and animation festivals. Nostalgia is available on DVD in Japan, but contains no extras on the disc. The packaging does include 3 postcard prints of artwork related to the film.

The images used in this review belong to Tomoyasu Murata Company. For more simages and samples of his animation, please support this artist by visiting his website and checking out his webshop or purchasing the DVD via yesasia.com: