Koji Yamamura (山村浩二) has two new films out this year. Man and Whale, which I while talk about in a moment, and Franz Kafka’s Ein Landarzt (カフカ田舎医者/Kafuka Inaka Isha/A Country Doctor) which is currently doing the animation festival circuit. I am hoping to find a way to catch it at the Fantoche 2007 in Switzerland in September if I can swing it. Not one to take a break for too long, Yamamura has a third film slated for release later this year called A Child’s Metaphysics (こどもの形而上学). Here is a sample screenshot: 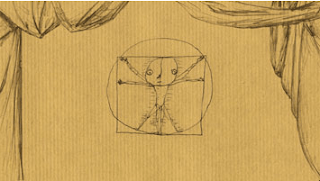 Greenpeace commissioned Yamamura to make Man and Whale (校長先生とクジラ) as a part of their campaign to end Japanese whaling. One encounters many urban myths and exaggerated stereotypes about the Japanese in the English-speaking world, but I’m afraid that it is true that whaling for commercial purposes does still take place. I had heard tales of English conversation teachers claiming to have been fed whale, but I didn’t fully believe it until last winter when I was shocked to discover a restaurant in Ueno openly specializing in whale sashimi. 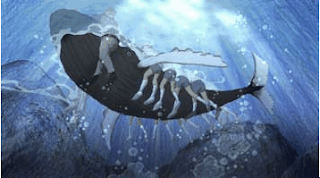 Yamamura has only 2 minutes to get his message across, and he does so with great subtlety and his usual attention to detail. The Japanese film title translates literally as “The Headmaster and the Whale”. The story is told from the perspective of an elderly headmaster of an elementary school who enjoys looking out to sea through his binoculars from the desk in his office. 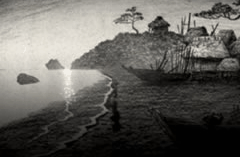 The headmaster recollects that as a boy, he and his peers were very poor and relied on what they could catch in the sea, particularly the meat of whales, in order to survive. The headmaster is haunted by these memories. Yamamura evokes the inner turmoil of the headmaster by transporting us back in time via that tried-and-true technique of a dissolve from colour into black and white, to the headmaster as a boy sitting at his desk in school. He then employs his signature theme of metamorphosis and has the katakana for whale (クジラ) float up off the page and transform into the shape of a whale before the boy’s startled eyes.
Emotion is also evoked via a beautifully composed score by Hitomi Shimizu. In an interview for whalelove.org, Shimizu says that Yamamura asked her to create nostalgic music similar to that used in Ozu films during the school scenes, then to increase the tempo and make the music “more thrilling” in the scenes with the whales.
The most emotional moment during the flashback comes when the schoolmaster as a boy witnesses a whale being harpooned, and the blood washes ashore to his feet. This scene owes much to Hitchcock’s Psycho

(1960) with the use of strings on the soundtrack and a close–up on the boy’s eye as he watches the event unfold in horror.
The scene then shifts to the boy painted a picture of the whale. He looks up to see a vision of a whale skeleton floating in the night sky. The whale skeleton dissolves into modern day apartment buildings as we are brought back to the present day. This dissolve suggests that the death of the whale contributed to the present-day prosperity of the community. The headmaster’s voice-over informs use that when he was young he knew no other way, but that today his heart feels heavy.
The headmaster picks up his binoculars again and sees a whale beached on a rock. In a panic, he races to the shore to try to rescue the whale. A class of students from his school are on the beach having gym class. They call out to him and then swim out to help him rescue the whale. The film ends with the message: “They saved us. It’s our turn now.”
I think that this is a very clever message to promote. On issues such as this, non-Japanese groups wishing to change policies in Japan often take the tack of trying to argue that what the Japanese are doing is unethical. This line of argument, of course, is more likely to result in indignation than dialogue. Yamamura’s film presents the problem as one about balance, suggesting that in times of need whaling is a necessary evil, but in modern Japan it has become an indulgence that threatens to destroy something beautiful. 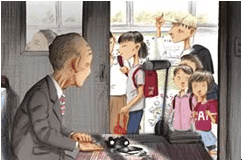 In his interview with whalelove.org, Yamamura says that he primary aimed to get children interested in the protection of whales and other environmental issues. That is why he chose to have the children help the teacher rescue the whale in the final scene. Of the many wonderful contemporary animators Greenpeace could have chosen to approach, I believe they made the right decision in selecting Yamamura for the task. Not only has he had a lot of experience making short films for and in collaboration with children, but he is a filmmaker who is able to strike just the right balance for this film. The film pulls at the heartstrings without being too cheesy. Yamamura’s work is engaging without being commercial, and artistic without being too ‘arty’.
The film has a warmth about it thanks to the use of traditional cel animation (they drew 1,700 sheets of cells) and the beautiful hues rendered by shooting it on 35mm.