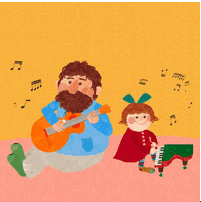 I found this great little short animated film on Youtube yesterday. Unfortunately, it has already been taken down due to violation of copyright. The person who posted Papa to Rusuban had posted dozens of shorts from the Minna no uta (Everyone's Song) NHK series.

This particular short features a song sung by the little girl about having a day at home with her father while her mother gets a day out. The father and daughter spend a lazy day together, enjoying each other's company, making the occasional mess, and completely forgetting to do any chores. The lyrics and subtle and clever, elaborating both the great pleasure the pair take in spending some time together as well as the occasional awkwardness that arises because they are unused to spending so much uninterrupted time together.

The music was done by the group Indigo Blue. They consist of Osakan born Rina on guitar and vocals and Hokkaido native Kouichi also plays guitar and does the arrangements. The singing for Papa to Rusuban was done by cute-as a-button Yumi Endo (遠藤由実), who, at 8 years of age, already has an impressive list of television credits to her name.

The animation itself is done in warm and bright colours with oranges, reds, and blues predominating. It is really very much like a hand-painted picture book for children come to life. I do hope a Minna no uta DVD comes out with the clip on it so that I can watch it again some day. If anyone knows the name of the animator, please let me know. I can't find a mention on the Indigo Blue website and I was so taken by the animation and the song that I didn't look for credits while watching the film.