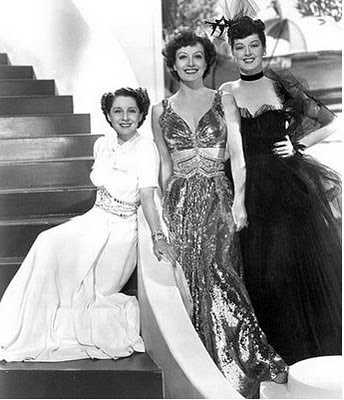 Theres a name for you ladies, but it isn't used in high society... outside of a kennel.

I just re-watched this film for the umpteenth time. With every screening, it just gets better and better. The dialogue is so rapid that one often misses jokes spoken under the breath (esp. by Rosalind Russell) the first time around only to catch them the next time around. Some of the dialogue is a bit dated – often shockingly so. For example when Mary’s mother tells her to stop lying about on her bed “like a swastika.” I don’t mind that the plot centers on men but I do object to some of the dialogue that demeans women. I tolerate it because the film really is a product of its time -- and there is so much great dialogue that outshines any awkward moments. Though this is my favourite George Cukor film, I do admit to hitting rewind before the very last scene because it is so saccharine it makes my stomach turn.

But enough feminism as I could hardly compete with Jeanette Winterson’s fabulous essay on the film ( read it here on her website). I love this film because of Clare Booth Luce’s crackingly bitchy dialogue and for the stunning performances from some of my favourite 1930s actresses. The lead is played by Norma Shearer, one of the classiest actresses of all time and so under-rated these days. Joan Crawford plays “the other woman” and perfects the bitch stereotype that would haunt her for the rest of her career. I don’t know if all the stories about Crawford and Shearer hating each other in real life are true or just publicity for the film, but they do have a wonderful frisson of chemistry in the dressing room confrontation.

Rosalind Russell, master of physical comedy, puts in an astounding performance as a truly awful high society matron – and wears the most hideous clothes. The wonderful character actress Mary Boland is hilarious as the Countess De Lave (L’amour, l’amour) – I also recommend seeing her as Mrs. Bennett in Pride and Prejudice (1940). One of the original Goldwyn Girls and at the time wife of Charlie Chaplin, Paulette Goddard plays the foxy Miriam Adams. I recently discovered that her fourth husband was the renowned writer Erich Maria Remarque – would love to read more about that relationship. Goddard was a great comic actress and it is a shame that she lost out on the role of Scarlet O’Hara in Gone With the Wind. She would have been great in that film. Joan Fontaine is beautiful as always but annoying as Peggy. The poor thing must have hated not having any of the good lines. Among the many other ladies in the piece, I will end with a nod to Phyllis Povah as the obnoxious woman with too many daughters, Hedda Hopper who plays a herself to a T, and of course the young Virginia Weidler, who was a truly great child actress and sadly died much too young. She puts in a great performance as Katherine Hepburn’s sister in The Philadelphia Story (1941). If you haven’t seen it yet, then it’s time to paint your nails girls…. JUNGLE RED!
Some of my favourite lines:

Olga: She's got those eyes that run up and down a man like a searchlight.

Sylvia Fowler: You simply must see my hairdresser, I DETEST whoever does yours.

Nancy Blake: Spider's in the parlor. Lets go join her