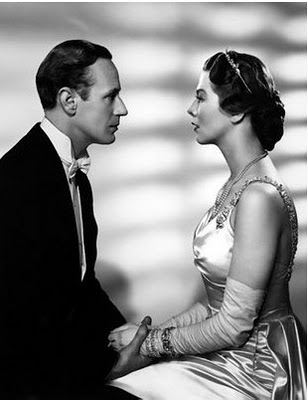 I’ve taught scores of American millionairesses to speak English.
The best-looking women in the world. I’m seasoned.
They might just as well be blocks of wood
- Higgins explaining to  why he
need not fear that Eliza will be taken advantage of by him.

This is an example of some of the choice dialogue in the 1938 film Pygmalion that I believe was excised by 1964’s My Fair Lady. Anthony Asquith and Leslie Howard’s adaptation of the George Bernard Shaw stageplay Pygmalion, is the perfect antidote to a screening of My Fair Lady. As much as I love George Cukor, I have always found Rex Harrison (cringe) and Audrey Hepburn (lovely as ever) very wooden in the roles of Henry Higgins and Eliza Doolittle. All the grand sets, beautiful costumes, and catchy Lerner & Loewe songs cannot replace the want of true feeling between the two leads. I also always cringe at the ending of My Fair Lady and wish that Eliza would become an independent woman at the end (as Bernard Shaw originally intended) or at the very least run off with foppish Freddy.

Pygmalion comes fairly close to offering Shaw’s original vision, as he himself adapted the screenplay and wrote a slightly more ambiguous ending for the film. I believe that My Fair Lady must also have reduced the role of Mrs. Pearce, Henry Higgins’s housekeeper, because I don’t recall Rex Harrison’s Higgins being told off by her [just checked: MFL replaces this scene with Higgins singing “Let a Woman in Your Life”- a most dreadful song!]. I had tears in my eyes when Mrs. Pearce, played with a lovely Scottish brogue by Jean Cadell, tells Higgins off for swearing and having bad manners at the breakfast table. A hilarious joke about alliteration ensues. There is also some dialogue between Higgins and Colonel Pickering that indicates that he enjoys being told off by Mrs. Pearce. Higgins also is told off all the time by his mother. This sets us up nicely for his growing fondness for Eliza. In the final argument scenes between Eliza and Higgins, Leslie Howard’s face softens at times, so that his expression belies some of the more harsh words he flings at Eliza, and for the first time I realized that he really has fallen in love with Eliza. In My Fair Lady, Rex Harrison played the part so coldly that I usually stop watching the film after the scene after the final confrontation at Mrs. Higgins’ tea table.
Wendy Hiller, famous for her stage performance in this role, does a commendable job of bringing Eliza to the screen. She has such an expressive face. The supporting cast are all equally superb, David Tree plays Freddy in a convincingly foppish way, Marie Lohr brings all her dignity and condescension to the role of Mrs. Higgins, and Scott Sunderland plays Colonel Pickering well (Colonel Pickering and Mrs. Higgins are the only characters in My Fair Lady that make it worth watching for me). The real difference between the acting in My Fair Lady and Pygmalion is that the later employs more film acting and less “staginess.”