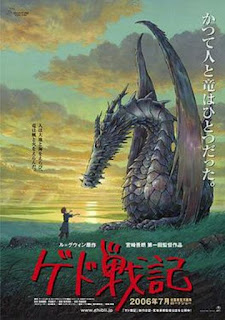 ), Studio Ghibli’s adaptation of Ursula K. LeGuin’s Tales from Earthsea novels against the work of his father, Hayao Miyazazki (宮崎駿). Critics and bloggers alike have jumped to point out the failings of Tales from Earthsea in relation to such films as Spirited Away

(千と千尋の神隠し, 2001) and Nausicaa (風の谷のナウシカ, 1984). It seems hardly fair to judge a son’s first film against films made by his father at the peak of his career. Hayao Miyazaki

高畑勲spent a long time as apprentices in animation studios before directing features of their own. In contrast, Goro Miyazaki has a background in landscape design and as such designed the Ghibli Museum in Mitaka no Mori where he also served as curator for four years.

Thus it should come as no surprise that the strength of the film lies in its beautiful rendering of architecture and landscapes. The Port of Havnor, pictured below, demonstrates the remarkable attention to detail and colour for which Studio Ghibli is famous. The most memorable landscape for me featured the two young protagonists of the film, Arren and Therru, sitting together on a hilltop looking out across a glorious expanse of wetlands and out to the sea. Simply beautiful. For some examples of the various landscapes and townscapes depicted in the film, click here to be directed to the trailer for the film. The trailer is accompanied by the powerful theme song of the film テルーの唄 (Therru’s Song) with lyrics by Goro Miyazaki and music by Hiroko Taniyama


Goro Miyazaki has also done a fine job with the design of the dragons. I have read that his father was finally convinced that he should be allowed to direct the film when he saw the drawing of Arren with the dragon that would eventually become the poster for the film. Ursula K. LeGuin

in her online response to the film also admired the design of the dragons. At the end of the trailer, they show part of the point-of-view shot of a bird of prey diving down toward the castle ramparts. This breathtaking shot is repeated later in the film from the point-of-view of a dragon. Moments like these demonstrate that Goro Miyazaki certainly has the animation skill to follow in his father’s footsteps.

The film falters however in its plot and character development. It is always a tricky business to adapt a novel to the screen, especially when the book has a following of devoted fans. There will always be things left out or altered in the process. The problem with Gedo senki is that they tried to do too much. Although the main plot comes from book 3 of the trilogy, The Farthest Shore

(1972), the film has borrowed characters, themes, and plot elements from all of the novels. Arren’s shadow is clearly inspired by Ged’s shadow in A Wizard of Earthsea

(1968), though the reason for its being there is not as clearly delineated. We don’t really get any of Tenar’s priestess backstory from the Tombs of Atuan

(1970), she is just presented as a friend of Ged’s who is carried for young Therru. The filmmakers have concocted a bit of romance between Therru and Arren that does not occur in The Farthest Shore (but perhaps in The Other Wind

(2001), which I have not read yet). I think that if they had kept to the story and themes of just one of the novels, the film’s plot would have been more gripping. LeGuin has a knack for gripping plotlines that keep a reader hooked until the very end.

(ホウルの動く城, 2004), which is also an adaptation of a popular fantasy novel (by Diana Wynne Jones). Although I certainly wouldn’t rate it among the best films released by Studio Ghibli, Earthsea

is a lovely film and I recommend seeing it if it comes to a cinema near you…. though unfortunately that may be a long ways into the future for those of you in English-speaking countries. Because a TV adaptation of the Earthsea novels was made a couple of years back, Ghibli won’t be able to get the licensing rights (at least not in N. America) until 2009. I have heard that the film will be shown at the Venice Film Festival with English subtitles. The festival runs from the 30th August to the 9th September.

The Japanese DVD (complete with English subtitles) can be purchased here: