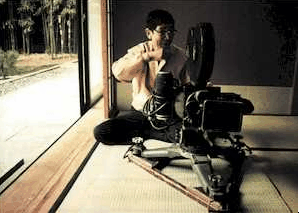 Wim Wenders has an uneven history as a director. He has made some truly great films like Paris, Texas

(1974). He has also made some disappointing films like In Weiter Ferne, so nah!

(1993). I know many people consider them cheesy, but I do love Der Himmel über Berlin

(1999) and could watch them again and again. I was prepared to simply adore Tokyo Ga

(1985), but instead found myself utterly disappointed.

Wenders bills the film as a quest to find remnants of Ozu’s Japan in contemporary Japan. He says: “Ozu’s work does not need my praise and such a sacred treasure of the cinema could only reside in the realm of the imagination. And so, my trip to Tokyo was in no way a pilgrimage. I was curious as to whether I still could track down something from this time, whether there was still anything left of this work. Images perhaps, or even people… Or whether so much would have changed in Tokyo in the twenty years since Ozu’s death that nothing would be left to find. " (Wenders).

Yet Wenders does little to track down Ozu’s Japan apart from his two interviews with long-time Ozu collaborators: actor Chizu Ryu (whose name he seems unable to pronounce properly, rather calling him “Rio”) and cinematographer Yuhara Atsuta. These interviews are always mediated by Wenders’s presence because he opts for voice-over translation instead of subtitles. This is particularly obnoxious for people who understand Japanese as then one must listen to two languages at once. Furthermore, as the voice-over is done by Wenders himself, I found that it rendered the translation as false because Wenders himself does not speak Japanese. This means that the words of Ryu and Atsuka are mediated by two people: the translator and Wenders. I would have much preferred subtitles. Even if I would not have been able to understand all of the Japanese, I would at least have been able to enjoy the natural rhythms of speech. The few moments we can hear Ryu with out Wenders’s voice-over are truly wonderful. The cadence of his voice has only been mildly affected by his age, and it transported me back to much-loved scenes from Ozu films.

The constant presence of Wenders’s voice does a great disservice to all of the images in the film. His voice is flat and emotionless. At times it almost caused me to fall asleep (my fellow viewers, Stefan and Bettina, did get lulled to sleep!). The most important rule in filmmaking is “show don’t tell” and Tokyo Ga would have been so much better if we as an audience had been able to mediate the images on our own, or just with the unusual soundtrack as accompaniment. The only person apart from Wenders who gets an unmediated monologue in the film is Werner Herzog in his interview atop Tokyo Tower. Herzog whines that there are hardly any Bilder (images) left in Tokyo – that everything has been built up and one must be an archeologist in order to find anything at all in this beleidige Landschaft (ravaged landscape). This only affirms Wenders view that what no longer existed in Tokyo was “the view which could still achieve order in a world out of order. The view that could still render the world transparent.” But in his search for this perceived “view” of Ozu’s, Wenders shows us Tokyo from the point-of-view of the tourist. In contrast, Ozu showed us the world within, the world of the domestic, the everyday. His films showed us that although children grow up, get married, leave home, and people move away or die, the world still goes on. His films are about the transience of life and the realness of the people who inhabit this life however fleetingly. Ozu’s films are about the universal whereas Wenders shows us the surface. I don’t know how strong the image of Japan was for international audiences in 1985, but from my perspective the images Wenders shows us seem very stereotypical: hanami (cherry-blossom viewing – which Wenders does not even name but refers only to people going on picnics), pachinko parlours, golf-putting ranges, the ever-presence of advertising, and so on. [There’s a great 1985 review in the New York Times by Vincent Canby with more on this topic. Click here, though you may need to register with the NYT to read the article.]

At one point in the film, Wenders comments that “The more the reality of Tokyo struck me as a torrent of impersonal, unkind, threatening, and yes, even inhuman images, the greater and powerful became in my mind the images of the loving and ordered world of the mythical city of Tokyo that I knew from the films of Yasujiro Ozu.” I think that Tokyo might have seemed impersonal and unkind if I had come here as alone and unable to speak the language. I have had my image of Tokyo mediated by the presence of my children, who have allowed me into a world I might never have seen. People’s faces light up when they see the children and shopkeepers talk to me. Wenders also needed to spend some time in the homes of middle-class Japanese families in order to see Ozu’s world – an invitation that does not come during a brief stay in Tokyo. Perhaps if he’d done a tour of the minshuku (B&Bs) of Hokkaido he’d have seen a more domestic side of these islands. Ozu’s Japan does exist, but it can only be seen by the traveler who is not in a hurry. A person who, like Ozu, has the time to sit and observe the minute details of people’s behaviour.

Despite all these reservations about Tokyo Ga, it is still worth a view for fans of Ozu and fans of Wenders. There is one moment where he does manage to capture a pure Ozu moment: the scene in the train station with the little boy who refuses to walk. It reminded me of all those petulant little boys in Ozu films -- like the one who give his grandfather a hard time in Early Summer

(麦秋, 1951). The section where Wenders goes to see a workshop where they make food models for restaurant display windows is fantastic. It often looks as though they are preparing real food. There are also some wonderful moments in the interview with Atsuta: a camera set atop Ozu’s specially-designed tripod shot against a garden of bamboo trees, Atsuta’s hand holding the beautiful stop-watch that Ozu used, Wenders leafing through Ozu’s screenplay for An Autumn Afternoon

(秋刀魚の味, 1962) complete with miniature sketches for shot set-ups. Wenders feels helpless because he cannot read a single word, not even the title – perhaps this film would have suited the title Lost in Translation

even better than Sofia Coppola’s attempt at rendering Tokyo on film.

For some truly great tributes to Ozu see Talking With Ozu and Kazuo Inoue’s I Lived, But… (生きては見たけれど1983) – extras on Criterion’s DVD of Tokyo Story

. A digitally remastered print of Tokyo-ga is also available for purchase on DVD in Japan: