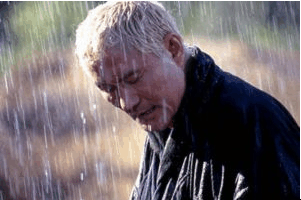 (visually stunning, decadently boring), I wasn’t sure what to expect from Zatoichi

. I also don’t usually enjoy films with so much bloodletting. Yet Kitano made all the bloodletting bearable with his skillful use of comedy to relieve the gruesomeness of it all.

From the subtle use of language (both oral and body) to the fight scenes choreographed rhythmically like ensemble dance numbers, the highly stylized nature of the film gave me the distance I need in order to watch such violence (the body count was so high in this film it is impossible to keep score). Added to this, the CGI blood that spurts from people when they get slashed is also comical in its fakeness. A huge spray (I read somewhere that Takeshi wanted the spurts to look like flowers) is so clearly fake because of its shiny translucency as well as the fact that the swordsman’s clothes remain clean of bloodstains. Takeshi was clearly having fun with the genre. As the Zatoichi (blind masseur) films starring the late Shintaro Katsu are such an established genre in Japan, Kitano must have felt he needed to do something extraordinarily different with his own version of the tale.

Other moments of comic relief are provided by the excellent supporting cast. The onnagata (man playing a woman) brother’s scene with Shinkichi in the ofuro is particularly well done. Shinkichi had been so convinced by the young man’s make-up that he can hardly believe the he evidence that he is sharing the bath with a man. Shinkichi asks if all it takes is make-up and the onangata replies, “it depends on the face.” This is followed by a scene in which Shinkichi’s aunt, O-ume, is shocked to find him putting on make up. He looks so comical with the make-up on: his lined, middle-aged face cannot disguise the fact that he is a man. The reaction of one of the neighbourhood boys also made me laugh. The boys have rushed over because O-ume’s house is burning down (arson by bandits seeking Zatoichi). The one boy’s shocked face looking at the flames turns to a completely different shocked face when he turns to look at Shinkichi. Classic!

The kitchy final sequence was quite a surprise and I thought it was a fabulous way to end such a spectacle: a curtain call complete with a tap-dancing number performed in geta by girls in colorful short kimonos and the young men in period costume from the tap-dancing group Stripes. It reminded me of the annual Red and White Song Festival (Kohaku uta gassen) that gets shown on the NHK. A couple of years ago there was a fabulous disco-esque number by a sequined kimonoed ensemble. Hilarous! I wish I’d taped it! The key cast members of Zatoichi join in the finale and there is a great CGI effect when the actors playing the younger versions of the brother (the onangata) and sister are transformed mid-dance into the older versions of themselves (ie they age 10 years). It certainly is no exaggeration to say that Takeshi knows how to make a spectacle in every genre he tackles.

This film is available on DVD in Japan with English subtitles.

For major fans, an 8-disc box set of the original TV series is available for purchase (no English subtitles):