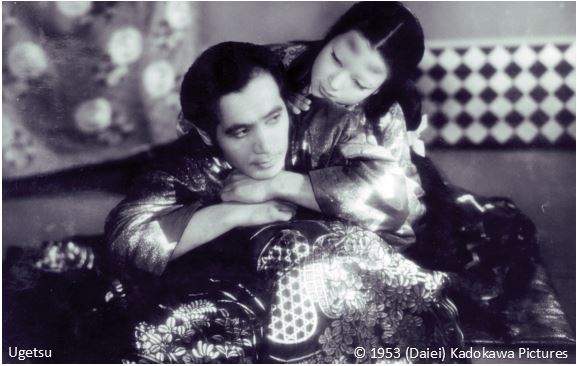 I watched Ugetsu (Kenji Mizoguchi, 1954) with my cultural studies students at Kanagawa University and found that they reacted to the ending of the film in a variety of ways. Some just felt that it had a moral lesson at the end: it does not pay to be greedy. Other students felt that the lesson was more ambiguous than that.

To be sure, Genjurō learns that success must be earned through hard work but one’s family and home should not be sacrificed for that success. Yet, these students felt that Mizoguchi did not present Genjurō’s story as a morality tale – although Genjurō was greedy and adulterous, he did not after all did not choose Lady Wakayama over his long-suffering wife, Miyagi. Mizoguchi makes it clear that Genjurō does love his wife in the scene when he fantasizes about buying his wife another lovely kimono with the money he has earned selling his wares. This is just before he is whisked away to Lady Wakayama’s house. Although he is quite taken with Wakayama’s beauty, he turns to leave her house after making his delivery and clearly does not expect to be invited in. It is clear that he has been put under a strange kind of spell.

My students were at a loss to know what to make of Lady Wakayama – a woman who is also an enigma to me. I was quite surprised because I thought that they might have a greater cultural insight into her role as a ghost in the film. At the very least I had hoped to learn from them about this old-fashioned style of make-up where the woman powders her face very white then draws two large black spots / “eyebrows” high up on her forehead. My students had no idea about the origins or meaning of this tradition and agreed that it was rather strange.

Mizoguchi is much talked of as a feminist filmmaker, yet I have not seen enough of his films or read enough essays on him to know in what way this is so. Lady Wakayama certainly is a powerful female figure, but has few positive attributes. Her elderly lady-in-waiting was my favourite character in the film, with her marvellously deep, chanting voice warning Genjurō that he cannot leave Wakayama. As much as I loved her, the “real women” provide a much more case for a feminist stance in the film.

Let me begin with the subplot in which we meet Tōbei and his wife Ohama. Tōbei is a rather foolish man who dreams of being a samurai even though he lacks the skill and education to do so. His wife harps at him to give up this dream and work hard with her to earn a comfortable living. When Tōbei runs off to pursue his dream, Ohama finds herself alone and unprotected and she is raped by bandits and turns to a life of prostitution in order survive. When Tōbei discovers her, he is not revolted, but feels sorrow that his ambition was responsible for his wife’s downfall. I think that many filmmakers would choose to have Ohama be killed or for her to kill herself because she has become a “fallen woman” at the hands of the bandits who attack her. Certainly, I was not expecting that Tōbei would be the one to pay for Ohama’s disgrace. He chooses to give up his newfound status as a samurai and become the kind of hardworking husband that he feels Ohama deserves.

In the depiction of Miyage, Mizoguchi’s feminism is less easily discerned. It could be read that Miyage has been punished for her husband’s greed and infidelity through her suffering and eventual death. Her son, too, is punished by the loss of his mother. Yet here is where the ambiguity of the morality of the film comes into play again. Have Genjurō and Genjiro (the son) really lost Miyage? Her ghost is there to welcome Genjurō home when he finally escapes from the spell Wakayama has put him under. The last voice we hear is also that of Miyage as she talks to Genjurō in the voice-over. Her voice is not bitter or resentful; rather, she is telling him that he is now the man that she wanted him to be: hard-working and no longer aspiring for the unattainable. She tells him that she is waiting for him in paradise [side note: my husband and I are not sure what is meant by this. The Japanese idea of paradise isn’t at all like the Christian one… but that’s a blog for another time & place].

To end these inconclusive meanderings, I must gush over the hauntingly beautiful location. My husband assures me that there are still corners of Lake Biwa that still have those reed beds. Lake Biwa is apparently one of those rare lakes that has not been ruined by the tourist trade (yet). We must really plan a visit during a particularly foggy time of year to get the Ugetsu effect.

For connoisseurs: the complete Mizuguchi collection is available on DVD box-set in Japan: