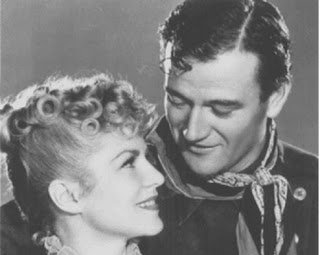 In preparation for an introductory class on Kurosawa next Monday, this week I revisited a couple of early John Ford movies. Stagecoach (1939) must surely be the best example of the Western genre in its classical form. Most reviews of the film concern themselves with the combination of dramatic action and the  setting or with morality play involving the motley assortment of passengers who represent a microcosm of Wild West society.

The thing that struck me the most on this viewing is the subtle handling of the romance between Dallas (Claire Trevor), the typical “hooker with a heart of gold,” and Ringo Kid (John Wayne), a well-known outlaw who has broken out of jail in order to seek revenge on the Plummer brothers who killed both his father and his brother. Along with Doc Boone, Dallas and Ringo are the characters cast as “indecent” from the outset of the film. Doc Boone is a drunk,  has been driven out of town by “respectable women,” and Ringo is an outlaw. The arc of the film demonstrates that although these characters seem rough on the outside, they are actually the most caring, selfless, and noble of any of the characters in the film. The looks that Dallas and Ringo give each other throughout the film serve to build the romance as we realize that these two only see the good in each other. Whereas the upstanding Lucy Mallory (Louise Platt) looks at  and sees a fallen woman, Ringo only sees a beautiful, kind, and generous woman. While most of the occupants of the Stagecoach see Ringo as a murderous crook,  sees a noble and kind soul.

Ringo’s love for  is sealed when he sees her holding Mrs. Mallory’s newborn baby. When Ringo asks  to come to live with him on his ranch (as close as a cowboy gets to saying “Ah shucks, will you marry me?”), Dallas doesn’t know how to tell him the truth about the unsavoury things she has done to make ends meet since her family was massacred when she was a kid.
: “But you don’t know me. You don’t know who I am.”
Ringo: “I know all I want to know. So will you go?”
:
Other wonderful moments in their romance:

When poor  is so torn up about whether or not she should say yes that she even asks Doc Boone if it would be alright for a girl like her to marry a guy like Ringo.

When Ringo asks the marshal, Curly, if he’ll make sure  gets to his ranch while he spends his year in
jail: “This is no town for a girl like her.”

The most wonderful scene occurs once they’re in Lordsburg and Ringo tries to escort  home and she doesn’t want him to follow all the way because he will discover what she’s been doing for a living. “It’s all been a crazy dream. I’ve been out of my mind just hoping. Say good-bye here, Kid” she says tearfully. He grabs her by the arm and says “We ain’t never gonna say good-bye.” The tension is accentuated by the impending gunfight. The film ends with them being allowed to escape across the border together to Ringo’s ranch by laughing Doc and Curly. Doc turns to Curly and says: “Well, they’re safe from the blessings of civilization.”

The romance in this film reminded me that it has been a long time since I had seen a really good screen love affair that truly swept me up in the romance of the affair. We don’t need tongue-down-the-throat sex scenes to titillate the senses. The best romances are the ones where more is hinted at than shown. The most sensual, titillating romantic scene in a movie for me is the love scene in Hitchcock’s Notorious, where Cary Grant and Ingrid Bergman are shown in close up peppering each other with small kisses because the censors of the time wouldn’t allow long lip-locks. Although censors have been responsible for a lot of good stuff ending up on the cutting room floor, back in their most censorious period they were responsible for much better love scenes because directors and actors had to come up with more and more ingenious ways to suggest more than show the physical longing between two protagonists. The only films that manage to do the same things these days are BBC costume dramas like Pride and Prejudice with Colin Firth. That series made Firth’s career skyrocket because of the suggestion of what might lurk under those wet clothes as he comes out of the pond, and the promise of the passion lurking behind those smoldering looks he gives Jennifer Ehle.