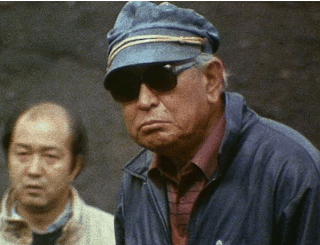 Like the film Ran itself, Chris Marker’s documentary, which he shot during the on location production of Kurosawa’s 1985 epic, is a kind of an intellectual exercise. In the process of looking up information about the making of this documentary, I discovered that fans of Kurosawa had blasted Chris Marker’s directorial efforts on the comments pages of imdb. One person suggests that it’s an example of “how to make a very good film out of somebody else’s masterpiece” while another calls it a “making of at its worst.” I paid these comments little heed until discovering that the New York Times review by the late Vincent Canby also blasted AK as being “singularly superficial.”

Imdb users can be excused for not “getting” AK, I think, because the film is currently packaged as an extra on DVDs of Ran (Criterion and Universal). The film was made before the advent of DVDs and as such it is not a “making of” in its current context and could therefore disappoint viewers’ expectations. Although it may not have been devised as a DVD extra, Ran and AK share the same producers: Serge Silberman, who produced films for Jean-Pierrre Melville & Luis Buñuel among others, and Masato Hara, who is perhaps best known as the producer of Hideo Nakata’s Ring movies. Despite this, judging from the film itself I’m pretty sure that Chris Marker was given a free hand with AK, because it bears the imprint of his directorial style: a self-reflexive, poetic exploration of a topic.

Unike the imdb crowd, Vincent Canby should have known better than to dismiss Marker’s film so cynically as “not good enough”, as he at least saw the film in the context of art cinema back in 1986. He had reviewed the films of the French New Wave and American independent cinema in the 60s and 70s and had particularly championed directors like Fassbinder and Woody Allen. For its debut in New York the film showed at Film Forum and was paired with Agnès Varda’s short film Ulysse (1982), which Canby also suggested was pretentious and, “oblique” and “self-absorbed.” In Canby’s defense, he was reviewing films in a time when journalists saw a screening once, then had to rely on their notes. This could result in snap judgments and occasional errors – such as his pointing out that AK introduces seven men as the “seven samurai” who have dedicatedly worked for Kurosawa over the years. The seven actually included one woman, of course, Kurosawa’s script girl and assistant Teruyo Nogami.

For me, AK is the kind of film that improves upon repeat screenings and whose real delights are discovered by the patient and observant spectator. Chris Marker is renowned for his avoidance of conventional narrative forms, so one must approach AK with an open mind. He belongs to a generation of documentary filmmakers who rejected the ‘objective’ documentary voice in favour of a more subjective voice. In fact, I hesitate to call AK a documentary as it is much more of a poetic essay that explores the themes of Ran in relation to Kurosawa’s oeuvre. The film also pays homage to both Kurosawa’s methods as a writer and director.

The film foregrounds at the very beginning the fact that the film is a construct by using a first person narrator and opening with a shot of a television and a hand holding a tape recorder against a red backdrop. As the tape recorder plays, we hear the voice of Kurosawa talking about his methods. It is pretty clear that Marker is using this technique to show that although we will be hearing Kurosawa’s voice throughout the film, his words and images are being edited by someone else. The film returns to this red scene throughout the film to show images from Kurosawa’s past films and personal history.

Marker divides AK into eleven sections separated by title cards in Japanese, English, and French. The introductory section is followed by Battle, Patience, Faithfulness, Speed, Horses, Rain, Lacquer & Gold, Fire, Fog, and Chaos. Canby saw these sections as ploys to “upgrade his footage,” yet if you read the film as a poetic essay, then it only makes sense to divide the film up into thematic sections. All of the title cards represent not only themes within the film Ran, but themes and motifs that Marker has noticed throughout Kurosawa’s oeuvre.

The true delight of Chris Marker’s AK is in the framing of the documentary footage his crew took on location. Wonderful scenes that capture true spirit of a film shoot: the waiting, the attention to finicky details about costumes and sets, and the weather. In fact, as the title cards Patience, Rain, and Fog suggest, Chris Marker’s film could have easily had the same title as Teruyo Nogami’s collection of anecdotes about working with Kurosawa called: Waiting on the Weather. In fact, I would highly recommend reading Nogami first then watching AK second as they truly complement each other. 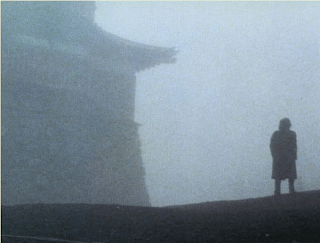 Some of my favourite moments in AK include the contrast of extras in historical costume framed by modern-day cars, Kurosawa patiently reining in Tatsuya Nakadai’s performance, and the wonderful image of composer Tōru Takemitsu exploring the set in the fog. There is also a loving tribute to Fumio Yanoguchi who, the narrator tells us, passed away during the editing of AK. Over an image of the great sound engineer sitting with his recording devices, Marker plays some of the sounds Yanoguchi had captured to add texture to the soundtrack of the film. Yanoguchi had worked on twelve films with Kurosawa starting with Stray Dog in 1949. He also did the sound for a couple of the Godzilla movies. They must have been a pretty tight group of friends and colleagues because the director of the Godzilla movies, Ishirō Honda, is a constant presence in AK standing behind AK and offering him advice when needed.

With AK, Chris Marker has created a poignant homage to not just Kurosawa, but to the entire team working with him on Ran. My only reservation in my praise for the film is the use of an English narrator. I know that most of Chris Markers films, such as La Jetée and Sans Soleil, were released with English narrators. I can only guess, because Chris Marker provides little information and gives few interviews, that he makes this choice for aesthetic reasons such as the subtitles detracting from the image. With AK, the narration has been written by Marker, and is delivered in the first person, suggesting that it is the filmmaker’s voice that we are hearing. I have never heard Marker interviewed, but I would imagine that his English has a French not an American accent. The narrator is also not given credit, but Vincent Camby’s review says that Robert Kramer is the voice that we hear. Kramer (1939-1999) was an American actor-director who made most of his films in France because, like Woody Allen, he had trouble finding funding in the States. While the narrator does a very capable job, I think it would have had a stronger impact if it had been the voice of the elusive Chris Marker himself.

Let me know what you think. I'd also be interested in hearing from any French readers if the French version of this film is narrated by Chris Marker himself. 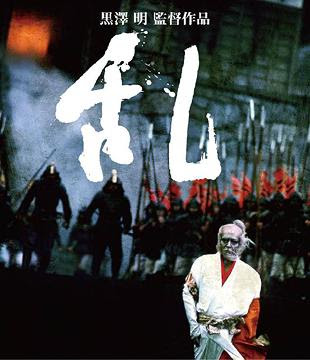