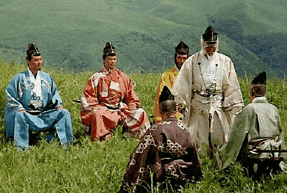 The adaptation to a Japanese setting was apparently influenced to a great extent by the life story of the 16th century daimyō Mōri Motonari. Some (Roger Ebert) also suggest that the film incorporates autobiographical elements from Kurosawa’s own life. The result is a very theatrical film that for me was more of an intellectual exercise than an emotional journey. As a spectator, one does not become as heavily invested in the plight of Hidetora as one does with Lear.

There are many reasons for this. First, it is hard to see past the horrific past war crimes of Hidetora such as the massacres of the families of his daughters-in-law, Lady Kaede and Lady Sué. Secondly, there is the inevitability of the plot ending in tragedy once you cotton onto the fact that the film is following the King Lear plot. Finally, as visually stunning and carefully composed as the film is, the staginess of the mise-en-scene keeps the spectator at an emotional distance from the subject matter. Especially if one compares the coldness of Ran to the emotional intensity of Kurosawa’s earlier films like Rashōmon (1950), Ikiru (1952), and High and Low (1963).

A good example of how the mise-en-scene creates a distant observer (and not in the Noël Burch sense) is how Kurosawa’s use of colour works both for and against the film. The colour clearly functions in a symbolic manner. Each son has a different colour in order to distinguish their fighting men in battle scenes (yellow, red, blue). Hidetora literally becomes a ghost of his former self with his white costume, hair, and skin colour when he is cast out by his two eldest sons. The focus on colour became so extreme that in Chris Marker’s documentary AK, one sees Kurosawa directing the crew to paint the grass golden for a night see that was later cut. The bright colours -- such as so-red-it’s-obviously-paint blood that splatters during the battle scenes -- become very theatrical to the point that it’s like watching a 1950s Technicolor musical.

I have often wondered why the distributors chose to keep the Japanese title “Ran” for this 1985 Kurosawa film. While watching Chris Marker’s documentary AK, which accompanies my German DVD as an extra (it’s also on the Criterion DVD) I realized that the answer probably lay in the multiple interpretations of the kanji 乱, all of which suit the film: chaos, excessive, reckless, rebellion, revolt, and so on. Ran is a bold, fascinating film whose imagery is not easily forgotten.

The German DVD was released by Universal and includes subtitles in German, English and Dutch. There is also a German dub and an English dub available. The latter of which really seems like a waste of money. I wonder when and why it was done. Unlike Germans, most English speakers only enjoy dubbing in spaghetti westerns. On the whole though it’s a decent transfer and worth the purchase for the Chris Marker documentary.