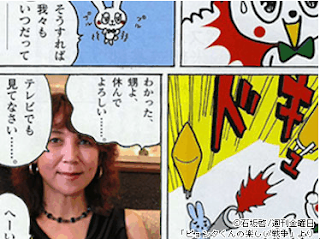 The Mainichi is reporting that manga-ka Kei Ishizaka (石坂啓, b. 1956) has leveled criticism at the Japanese government for ‘wasting’ 11.7 billion yen of taxpayers money on a new arts facility that will display anime and manga art. Ishikaza won the prestigious Grand Prize at the Japan Media Arts Festival in 1999 or her manga I’m home (アイムホーム) which was adapted into a live action drama by the NHK in 2004 starring Saburo Tokito (時任三郎) and Misako Konno (紺野美沙子). The Aichi-born manga-ka claimed that manga fans would not appreciate original drawings displayed in frames and that she was so ashamed by the project that she would return her 1999 award and ask that the facility not display her works there.

To a certain extent I do agree with Ishikaza. Art in Japan is so under-funded compared to other developed countries, it would be a shame if 11.7 billion yen were just being spent on a museum rather than towards grants for nurturing the talents of both up-and-coming and established artists who have to scramble for funding or take commercial jobs in order to make a meager living. On the other hand, I disagree with Ishikaza’s statement about manga lovers not being able to appreciate original drawings. While living in Tokyo I went to exhibitions of manga and animation artists and found them phenomenally inspiring. In fact, a very small gallery exhibition by Tomoyasu Murata is what inspired me to focus this blog on Japanese visual culture and the book I am writing about Japanese art animation. An exhibition about the life and art of Osamu Tezuka that I saw at the Showa-kan was also a unique experience. Original art has, in the words of Walter Benjamin, an aura about it that reprints cannot quite capture.

The articles that I have tracked down on this statement by Ishizaka do not give the official name of this new ‘facility’, so it is also not clear to me if it will just me a museum or also a place for artists to meet or work. If anyone knows any more details of this project, do let me know.