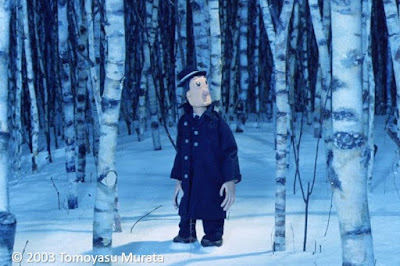 Tomoyasu Murata (村田朋泰) has made his early independent film White Road (白の路 / Shiro no michi, 2003) available on YouTube for the first time.  It is one of a series of short puppet animations with a pianist as the main protagonist. White Road brought Murata’s work to a wider audience in East Asia because it was re-edited and used as a music video for popular J-Pop band Mr. Children’s 2004 song Hero. Images from other animated films by Murata were projected onto screens during Mr. Children’s 2004 Shufuku no Oto tour.

Memories of a boy and a girl. Even now, as an adult, I can't forget the memories and wistful pain. Like running through a white landscape forever.

The film has an elegiac tone.  Instead of dialogue or narration, the story is told through character expression, puppet movement, sentimental music, foley effects (wind, the crunching of snow), silence and expressive use of colour.  The predominant colour of the film is indeed the white of the title, but it is complemented by the use of blue light, which adds to the melancholy atmosphere.
White Road shows the nameless pianist returning to his rural childhood home in the winter. He is haunted by the memories of a young girl who had been his playmate and the puppy that they loved but died, possibly due to their unwitting neglect. The pianist’s memories are evoked through flashbacks that sometimes involve him sharing the screen with his younger self. Particularly poignant is the scene in which he mourns the puppy and an adult ghost of the dog looks on as if forgiving him for his childhood mistake. We are also invited to share in the pianist’s grief for his lost childhood friend, who moved away with her family.
For more information about the director see: https://www.tomoyasu.net/
Follow Murata's production company on twitter: @TMC_STAFF
2020 Catherine Munroe Hotes
Posted by Tanuki Press at 9:12 am