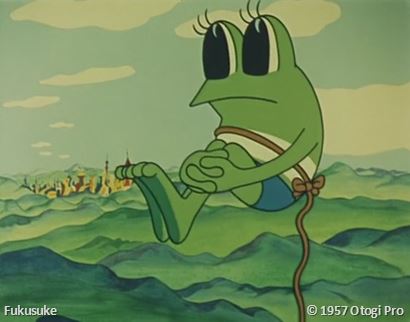 On Day 2 of the 16th International Animation Festival Hiroshima 2016. the Focus on Japanese Animation continued to explore early anime history.  On Day 1, early works by anime pioneer Mitsuyo Seo were shown including examples of the Private Norakuro series from the 1930s, Duck Brigade, and one of his best works, Ari-chan (Learn more here).  Seo is best known for directing the wartime propaganda films Momotarō's Sea Eagle (Momotarō no Umiwashi, 1943) – some sources give 1942 for this film – and Momotarō's Divine Sea Warriors (Momotarō: Umi no Shinpei, 1945).  Momotarō, a popular Japanese folk hero, was such a successful propaganda tool that films using him and other popular folk tales were actually censored by the American Occupation in the immediate post-war years.  It is interesting to study these films alongside their American, Canadian, British, and German counterparts, to see how this relatively new medium of animation was used to fabricate notions of nationalism and to support the war effort.  Read review of Momotarō's Sea Eagle (1943) to learn more.  I also recommend the Dutch documentary Ducktators (Guus von Wavern & Wolter Braamhorst, 1998) about animated propaganda done in Hollywood during World War II. 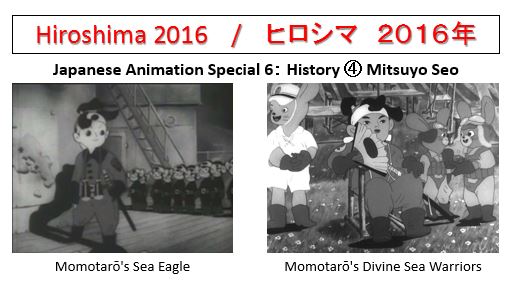 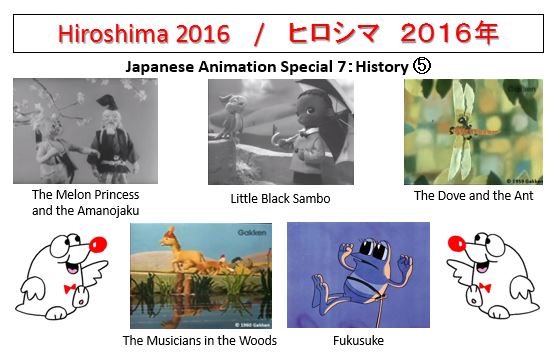 This section of films recognises early Japanese innovators in animation.  The first four films are examples of early puppet animation for educational purposes.  Before Tadahito Mochinaga and his studio MOM Pro were hired by Rankin/Bass in the 1960s to make what have since become American stop motion TV classics (learn more), Mochinaga had already been making animation in Japan and in China.  This selection features two of his early puppet animations The Melon Princess and the Amanojaku (1956) and Little Black Sambo (1956) (Read review).  Mochinaga did not make his works alone.  He had help from many talented animators including Hiroshima 2016 Jury Selection Committee member Fumiko Magari and Yoshitsugu Tanaka, among others.

The publisher Gakken, also got into the animation for education scene in the 1950s.  This selection features works by their two top animator/director/producers: Kazuhiko Watanabe and Matsue Jinbo.  In celebration of their 70th anniversary, Gakken has been posting their back catalogue of innovative puppet animation on YouTube.  Read the reviews of   The Dove and the Ant (1959) and The Musicians in the Woods (1960), to learn more.

The final film in this screening is Fukusuke (ふくすけ, 1957) by legendary manga-ka and Otogi Pro founder Ryūichi Yokoyama.  Unlike the other films it does not use puppet animation, but it does use stop motion using cutouts for some of the effects.

This selection features innovators in animation who came to prominence in the 1960s and 1970s.  Yōji Kuri is an iconoclastic artist who founded the Animation Group of Three (アニメーション三人の会/ Animation Sannin no Kai) with his fellow artists Ryohei Yanagihara and Hiroshi Manabe.  Learn more about them here.  Kuri has been a regular at the Hiroshima festival since its inception.  Read reviews of his films Love (愛, 1963) and Two Grilled Fish (二匹のサンマ, 1967).

Osamu Tezuka is most famous as a manga-ka and for his ground-breaking anime series like Astro Boy, but he also tried his hand at what he called jikken animation (experimental animation).  Although not experimental in technique, they were certainly innovative in terms of narrative and style and brought Tezuka much acclaim.  Tezuka was at the first Hiroshima festival in 1985.  Learn more about it here and here. 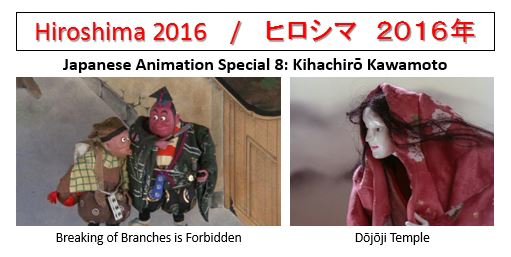 Kihachirō Kawamoto was, along with his friend Tadanari Okamoto (who features later in the programme), one of Japan’s great puppet animation masters.  He was at the first Hiroshima animation festival in 1985 and was a regular guest there until his passing in 2010.  Read his obituary and a review of Dōjōji Temple (道成寺, 1976) to learn more. 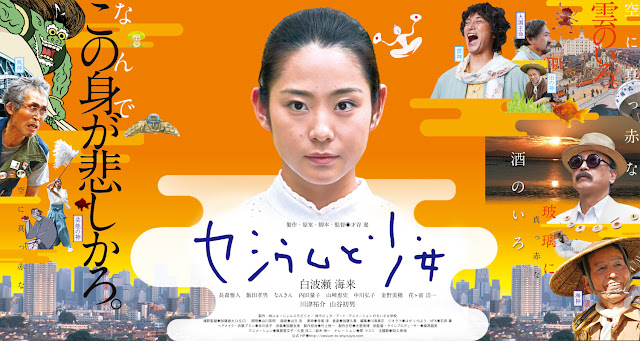 The final event of Day 2 of the Japanese Animation Special was Ryo Saitani’s feature film Cesium and a Tokyo Girl (2015) which uses a mixture of live action and animation to follow central protagonist Mimi and the seven gods in search of Mimi’s grandmother’s myna bird Hakushi.  The film was made in partnership with the Laputa Art Animation School.  Saitani is a long time animation fan and critic, who became known for his work for the magazine COMIC BOX (コミックボックス).  He made a documentary about early animation innovators in Japan called Here We Go with Yoji Kuri! (2008).