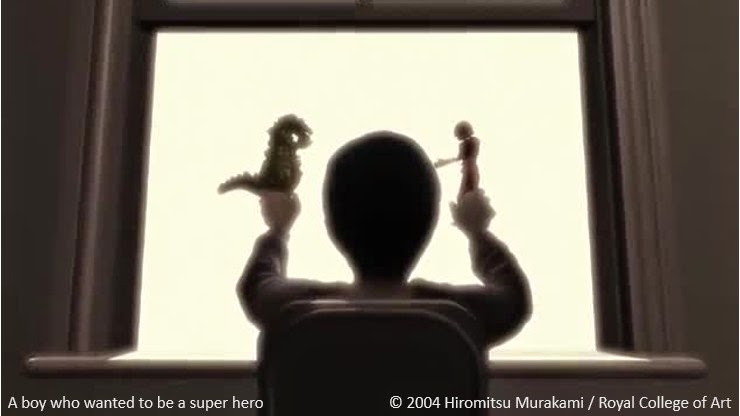 Superhero comics usually rely on familiar character types and formulaic plots of good overcoming evil and restoring the status quo.  Such stories are comforting to us as children, and one of the challenges of growing up is coming to terms with the reality that the world and superheroes are not as straightforward as in fiction.

A boy who wanted to be a super hero (2004) is an animated short by Hiromitsu Murakami that charts an imaginative young boy’s disenchantment with his dream of becoming a superhero.  Instead of focusing on a more realistic goal; however, this young boy, for reasons he himself cannot even discern, instead dreams of becoming a panda.  The imagined panda becomes the voice inside of the boy that tries to dissuade him from thoughts of depression and suicide, and seeks to restore the dream of being a superhero who can save the world.  Kafkaesque flying fish signal a journey to the past in the seaside town where the boy spent his early childhood.  Donning the guise of the panda himself, the boy witnesses his past self and must come to terms with the deep-rooted feelings of loneliness and inadequacy.  Perhaps the world that needs saving is not an external act, but an internal one.

Many Japanese independent animators look outside of Japan, particularly to Europe and North America, for role their animation role models.  Hiromitsu Murakami pursued his animation studies in England and the influence of both his native culture and British aesthetics are apparent in his work.  The set design is inspired by real places around Finsbury Park, London and Folkestone, on the English Channel.  Although the sets are English in character, the central protagonist is distinctly Japanese, with a wide-eyed anime look.  The toys that he becomes disenchanted with in the first scene are also inspired by Japanese characters – in one hand he has a kaiju (a monster like Godzilla) and in the other an Ultraman-like superhero.

This duality between cultures is also reflected in the use of both 2D and 3D animation techniques.  As Murakami himself describes, “At first, I took photographs of people and landscapes and transformed images into an anime look. Then I attached images on flat board and formed along the images. It's a kind of 2.5D cut-out animation in a 3D space.”   It creates a feeling of dislocation in the spectator that reflects the psychological reality of this boy trying to make sense of an often senseless world.

Hiromitsu Murakami (村上 寛光, b. 1975) has a BA in Imaging Art from Tokyo Polytechnic University (1998) and an MA in animation from the Royal College of Art (2004).  He has been an assistant professor at Tokyo University of the Arts since the inception of its animation programme in 2008.   Follow him on twitter @kaetama.