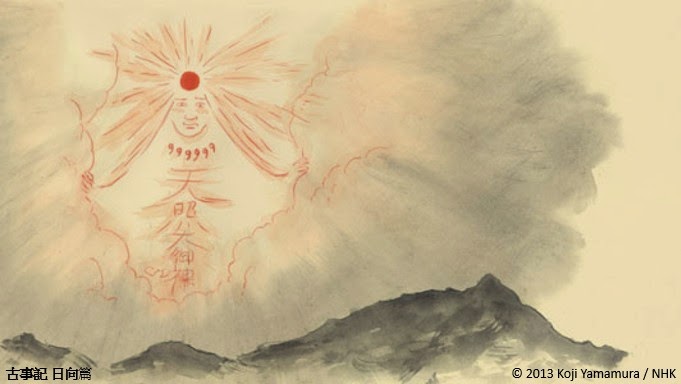 In 2012, Japan’s oldest extant chronicle the Kojiki, or Record of Ancient Matters (712), celebrated its 1300th anniversary.  The publicity surrounding this anniversary triggered a marked increase in tourists travelling to the mystic places related to the Kojiki, such as the sacred Takachiho Gorge, home to Yaoyorozu no Kamigami  (八百万の神々) and Aoshima Shrine, where the love story between Yamasachihiko and Princess Toyotama takes place.

In March 2013, the NHK aired a documentary called "Kojiki" Girl Travelogue (古事記ガール 日向路を旅する, 59 min., 2013) that follows the actress Tomoka Kurotani (Shinobi: Heart Under Blade, Quill: The Life of a Guide Dog) as she travels to Miyazaki Prefecture to visit some of these mystic places in and around the city of Hyūga.  Instead of just hiring a narrator to recite the relevant passages from the Kojiki, the NHK engaged the services of Oscar-nominated animator Kōji Yamamura to bring these much-admired mythological stories to life. 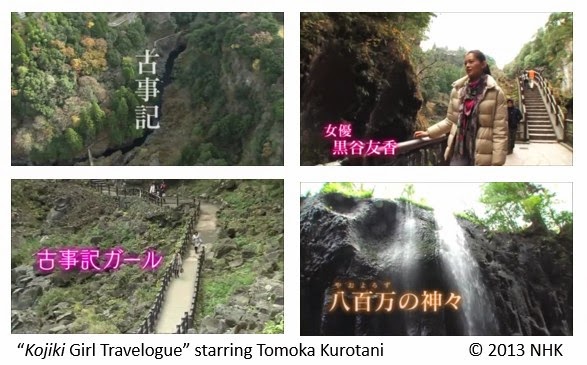 Yamamura has a long history of collaboration with the NHK dating back to his wonderfully imaginative series for children Karo and Piyobupt (カロとピヨブプト, 1993) – which was recently released on DVD in France.  Other NHK projects include the Karo and Piyobupt spinoff Pacusi (パクシ, 1991), which was a series of short-shorts, and more recently Prekiso English (プレキソ英語, 2011-12), a series of micro-stories designed to teach preschoolers English vocabulary.

The four animation sequences written and directed by Yamamura are set in Hyūga and concern themselves with the Shinto creation myth and the emergence of gods.  After screening on TV and NHK on Demand, the sequences were edited into a festival version under the title The Hyuga episode of Kojiki (古事記 日向篇/ Kojiki Hyūgahen, Japan, NHK, 2013) and in French, Récit des temps anciens : épisodes de Hyûga.  The festival edition competed at Ottawa, MONSTRA, and Animafest.  It also made the Jury Selection at the 17th Japan Media Arts Festival.  The festival cut will screen at Nippon Connection as part of their Koji Yamamura Retrospective. 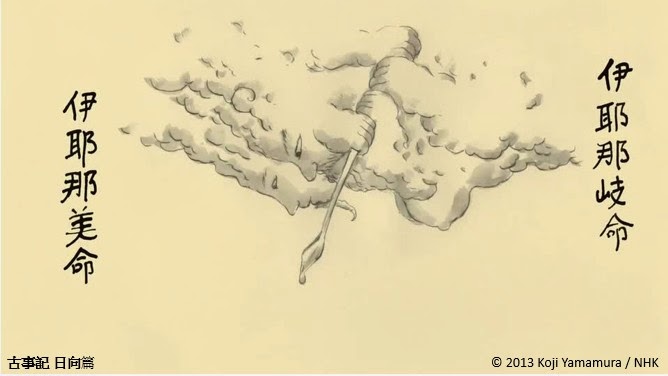 This the myth of how Japan was created.  Yamamura depicts a couple formed of clouds embracing and resulting in the birth of Izanagi-no-Mikoto and Izanami-no-Mikoto.  The cloud forms of Izanagi, holding a spear, and Izanami look down upon the islands of Japan.  Burned giving birth to Kagu-tsuchi, the god of fire, Izanami descends to the underworld.  Izanagi misses his wife and tries to visit her, but she demands that he look away.  Before he can do so he sees that she is covered with maggots and eight gods of thunder.  Izanami sends demons to chase Izanagi but he manages to escape the underworld and seeks to cleanse himself.  He goes to Awakihara, Himuka in Tsukushi country.  There he strips in order to bathe, and this cleansing process results in the birth of twelve gods.  Two gods are born from the impurities of the netherworld, three to clean the first two, and six sea gods.  Then, Izanagi washes his left eye and the sun goddess Amaterasu is born.  The moon god Tsukuyomi is born from his right eye and Susanoo, the god of sea and storms, from his nose.  Delighted by the birth of these three holy figures, Izanagi gives Amaterasu the heavens to reign over, Tsukuyomi is given the night, and Susanoo the ocean.  However, Susanoo neglects his duties and cries until his beard grows long.  Trees die, rivers and seas dry up and evil descends on the world.  Izanagi asks him why he cries and neglects his domains.  Susanoo explains that wants to see his mother Izanami in the underworld.  This episode ends with Izanagi sending Susanoo to sea on a boat in exile. 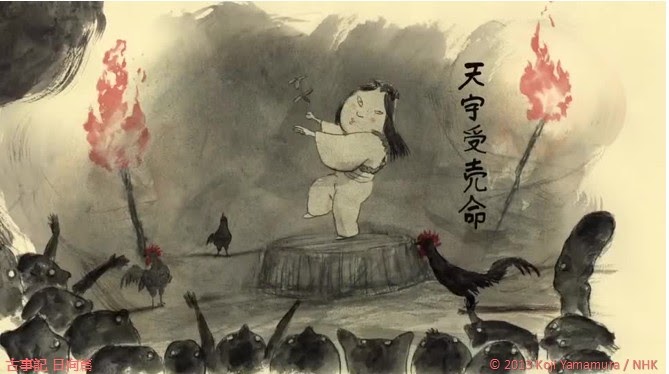 This episode begins with the exiled Susanoo going on a rampage in the heavens, which are the domain of Amaterasu.  Amaterasu is frightened by Susanoo’s behaviousr and hides herself in a cave.  Darkness descends upon the world and brings evil with it.  The gods of all the elements gather by the river near the cave and come up with a plan.  Ame-no-uzume, the goddess of dawn, mirth, and revelry, overturns a tub and does an amusing dance in which she exposes herself while the other gods cheer her on.  Amaterasu is overcome with curiosity about the sounds of celebration.  She wonders if a god more divine than herself has descended from the heavens.   When she opens the cave to peek out, she sees her own reflection on a mirror placed in front of her.  Ame-no-Tajikarawo dashes to close the cave behind her while another god seals the entrance to the cave with a magic shimenawa rope.  Amaterasu is thusly returned to her rightful place bringing sunlight to the heavens and the earth.  The gods tell Susanoo that he must bring offerings in order to be redeemed.  They cut his fingernails and his beard and exile him from the heavens. 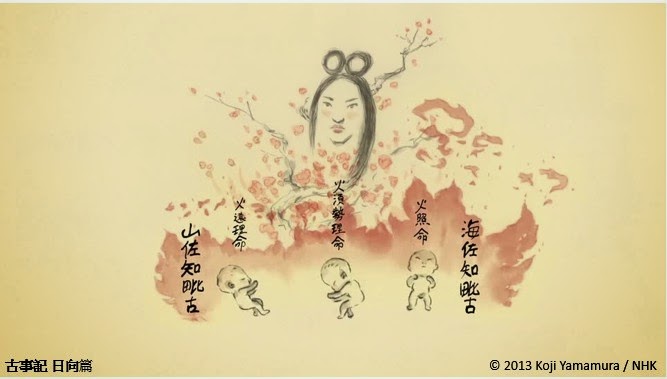 Amaterasu and Takaki-no-kami command the god Ninigi, the grandson of Amaterasu, that he should descend to Earth and govern for them.  At Cape Kasasa, Ninigi meets a beautiful girl.  She tells him that her father is the great mountain god Kamu-Atatsu (also known as Ōyamatsumi).  She is known as Kono-hana , or “Flowering Tree”.  Ninigi is impressed by her and asks her to marry him. She cannot give him and answer and bids him to ask her father for permission.  The great mountain god is happy to accept Ninigi’s proposal and also offers up his other daughter Iwa-Naga (Eternal-as-a-Rock), but Ninigi only wants Konohanasakuya-hime (Kono-hana / Flowering Tree).  He sends back the ugly Iwa-Naga.  If Ninigi had accepted Iwa-Naga, the great mountain god would have blessed him and his descendants with prosperity and longevity (as strong as a rock in a blizzard).  But since Ninigi only accepted Kono-hana, his descendants’ lives will be fleeting (as long as the leaves on a tree).  Princess Kono-hana gets pregnant that night but Ninigi is suspicious.  In order to prove her innocence, she gives birth to three sons in a burning shack.  Her first son is Umisachi (he who harvests from the sea). Her second son is called Hosuseri, while her third son is Yamasachi (he who harvests from the land). 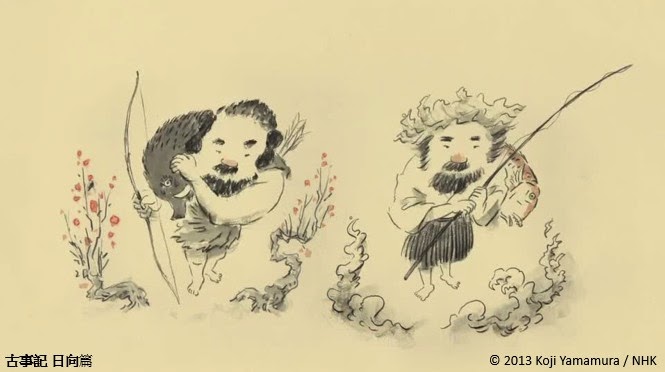 Umisachi harvests from the sea and his brother Yamasachi from the land.  Yamasachi wants to borrow his brother’s fishing rod and offers to trade him for his bow and arrows.  Umisachi turns his brother down three times before relenting.  Yamasachi fails to catch any fish and even loses the hook.  To make it up to his brother he makes thousands of replacement hooks out of his own sword.  But Umisachi is not satisfied.  He wants his own hook back.  Yamasachi cries in despair.  The god of the tides tells Yamasachi he should visit the god of the sea, Ōwatatsumi, for advice.  Ōwatatsumi tells him to marry his daughter Princess Toyotama.  After three carefree years of marriage to Princess Toyotama, Yamasachi remembers his debt to his brother.  He tells his wife about what happened.  Her father summons the fish and asked them if they have the lost hook.  They tell him that it was caught in the throat of a fish.  Ōwatatsumi gives Yamasachi the hook and says that when he gives it to his brother, he should keep his back turned away from his brother and chant “Obochi, Susuchi, Majichi, Uruchi”.   He advises him that if his brother plowed the upper rice paddy, then Yamasachi should plow the lower one.  On the other hand, if he plowed the lower rice paddy, then Yamasachi should plow the upper one.  He will limit the water so that after three years, Yamasachi will prosper while his brother will struggle.  If Umisachi’s grudge leads to war, the Sea God tells Yamasachi to drown his brother using a flood-inducing charm.  If Umisachi apologizes, the ebb-inducing charm can be used to rescue him.  He must ensure that his brother suffers.  Yamasachi does as the father-in-law suggests and eventually Umisachi falls at his brother’s feet to beg forgiveness.  Umisachi swears eternal fealty to his brother.

Atsushi Makino and Yutaro Kubo assisted Yamamura with the animation for this documentary (see their profiles below).  Both studied under Yamamura at Tokyo University of the Arts, with Makino graduating in 2011 and Kubo this spring.  In the documentary, the NHK includes footage of Yamamura on location in Hyūga taking sketches of the reputed locations for the events that unfold in the stories.

The character design is distinctly that of Yamamura.  Viewers familiar with his work will notice similarities to characters in films like Mt. Head (2002), Franz Kafka’s A Country Doctor (2007), and Muybridge’s Strings (2011).  However, the overall look each of Yamamura’s films is uniquely grounded in the subject matter.  For the Kojiki, Yamamura has chosen a colour palette similar to that of a sumi-e (ink wash painting): blacks and greys with red used for Amaterasu, the spring blossoms of Kono-hana and other scenes where a pop of colour is needed (the sun, flames, to distinguish the fish that swallowed the hook from the other fish, etc.).  The background colour is sepia like that of an aging scroll.  In order to facilitate the episodic nature of these tales, Yamamura transitions from scene to scene by panning the camera from one illustrated vignette to another.  He gives a nod to the fact that these are based on stories that have been passed down from generation to generation on ancient  scrolls by incorporating the characters’ names in Chinese characters into the scenes.  Yamamura’s tendency toward the surreal and absurd in his films is a perfect match for the oddities of the stories – from Amaterasu’s flaming crotch due to the birth of the fire god to depicting the relationship between the gods and the natural world.  The NHK really ought to produce a book of these stories with Yamamura’s illustrations.

Kōji Yamamura (山村浩二, b. 1964) is from Nagoya.  He studied painting at Tokyo Zokei University (1987).   He founded his own animation studio, Yamamura Animation, with his wife Sanae Yamamura in 1993.   Yamamura has received numerous awards in his career including Grand Prix at prestigious festivals (Annecy 2003, Zagreb 2004, Hiroshima 2004, et al.) and an Oscar nomination (2003).   In addition to making his own films, Yamamura is professor of animation at Tokyo University of the Arts (aka Geidai).  He is currently vice-president of the Japanese Animation Association and a member of the board of the Japanese branch of ASIFA.  Yamamura recently opened an animation store and gallery called Au Praxinoscope in Jiyugaoka.  The gallery is currently holding an exhibition on Pritt Pärn which runs until May 31st and will be followed by an Igor Kovalyov solo exhibition.

Atsushi Makino (牧野惇, b. 1982) is from the city of Echizen in Fukui Prefecture.  He has a degree in Graphic Design from UMPRUM (Academy of Arts, Architecture and Design in Prague, 2009) which he followed up with an MA in Animation from Tokyo University of the Arts (2011).   Makino’s graduation film was Specimens of Obsessions (標本の塔, 2011).  He works as an animation director for Eallin Japan.

The Hyuga episode of Kojiki will screen at Nippon Connection 2014 as part of the Koji Yamamura Retrospective. 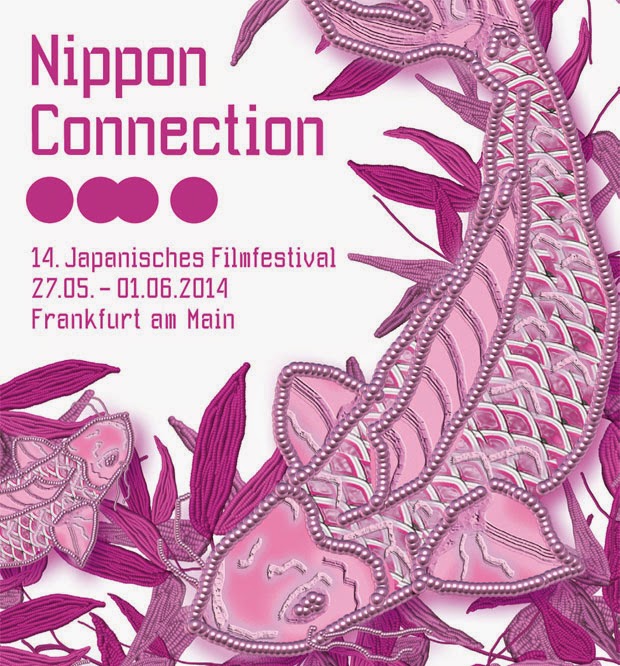