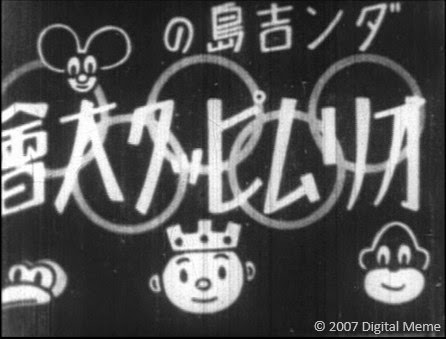 The most popular heroes of the Fifteen Year’s War (1931-1945) in Japan were boy heroes like the comic strip figure Mābō and the folk tale legend Momotarō.  One of the most loved was Daring Dankichi (冒険ダン吉/Bōken Dankichi) from the comic strip series of the same name by Keizō Shimada (島田啓三, 1900-1973).  The comic appeared in the magazine Boy’s Club (Shōnen Kurabu) and the tales were also edited into a children’s picture book as well as adapted into a series of animated shorts.

It is believed that the adventures of Dankichi were inspired by the real life tales of the exploits of Koben Mori (森小弁, 1869-1945), the colonist who was one of the early Japanese settlers in Micronesia.  The International Institute for Children’s Literature in Osaka, on its web archive One Hundred Japanese Books for Children (1868-1945) summarizes the plot of Shimada’s picture book Bōken Dankichi thusly:  “In this story, a boy protagonist drifts to a southern island in his dream.  He becomes king of the island.  On one hand, this work tells a story about creating a pastoral utopia on an island, however, on the other hand, it can be read as the embodiment of the idea to conquer Southeast Asia at that time.” (See: IICLO for more details and scans of the book).

The animated short Olympic Games on Dankichi Island (ダン吉島のオリムピック大会/ Dankichi-jima no Orimpikku Taikai, 1932) is one of a handful Dankichi animations extant.  The animator and director are currently unknown.  It seems likely that the film was made to coincide with the Games of the X Olympiad which was held in Los Angeles in 1932.  One of the few Asian nations represented at these games, Japan sent almost as many athletes as Germany – although their team was still only a quarter of the American contingent that year.

The animation sets the Olympic games on Dankichi Island, hosted by the king of the island Dankichi himself.  A variety of animals, both wild and domestic, compete against the native peoples of Dankichi Island, who are portrayed using Jim Crow blackface stereotyping.  The “natives” wear grass skirts to denote the Pacific islands – an area of great strategic concern to the Japanese government at this time.  The spectators and athletes are depicted as being segregated, with the animals on one side and the “natives” on the other in any scene in all crowd scenes.  The races are full of gags and pratfalls, with contestants winning more by accident than design.  Dankichi himself even participates in a log-carrying race and wins because of the misery of another.  The “natives” toss him into the air in celebration at the end of the film.

The animation is quite rudimentary, made with cut-outs and simple designs.  Following the common practice of the silent era, “close-ups” are done using irises.  The relationship between comic strips and animation can be seen in the use of speech bubbles in addition to inter-titles.  Other common motifs of comics – such a as stars and swirls to denote dizziness – abound.

The propagandistic nature of this film is made clear from the outset with the first shot being of Japanese flag flying from a tropical tree.  Dankichi is clearly delineated as being “other” than the natives of the island with his “whiteness” and round-faced “kawaii” look.  The native peoples are affable fools, who bumble about good-naturedly in contrast to the direct action of Dankichi.  The not-so-subtle message of the film is that the Japanese (Dankichi) are superior to the Pacific Islanders (Jim Crow stereotypes).   Indoctrinating children into the myth of the cultural superiority of Japan was crucial at this time to the colonial aims of the ruling class.

It is fascinating to see that the Japanese adopted racist black stereotyping from the West.  I have not looked into how far back the use of this imagery goes in Japanese culture, nor do I know from whence it came, but my educated guess would be that they were influenced by American popular culture.  American films, cartoons, and comics were readily available in Tokyo at the time that Shimada created Dankichi.  Minstrel themes were very common in American silent films – in fact, Warner Brothers’ had just had a smash “talkie” hit a few years earlier with The Jazz Singer (Alan Crosland, 1927) starring Al Jolson doing the blackface routines for which he was famous.  The Jazz Singer (ジャズ・シンガー) was first shown in Japan on 21 August 1930 so there is the possibility that it was seen by Shimada and the animators of this film.  Unfortunately, at this time in U.S. history, Jim Crow imagery was the norm.  To learn more about its pervasiveness, I recommend Ferris State University’s Jim Crow Museum.  Examples of Jim Crow imagery in animation from the 30s and 40s include United Artists’ Censored Eleven and MGM’s Mouse Keeping (1948) starring Tom and Jerry.

This  film is silent, with a soundtrack composed and performed by Jōichi Yuasa (湯浅ジョウイチ) for the DVD release.

A discussion of Dankichi in comics and animation used to promote imperialism can be found in Chapter 2 of Michael Baskett’s The Attractive Empire: Transnational Film Culture in Imperial Japan, Honolulu: U of Hawai’i P, 2008.