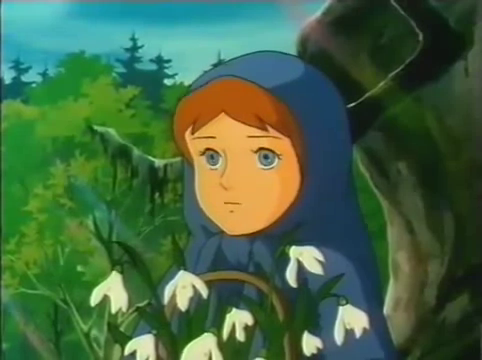 Watching autumn slowly turn into winter here in central Germany, I got to thinking about Tōei Dōga’s delightful children’s anime Twelve Months (森は生きている/ Mori wa Ikiteiru, 1980) and managed to track it down as an extra on a DVD release of The Wild Swans (白鳥の王子, 1977).  It is wonderful to watch with children under the age of 10 because it is a reasonable length (about an hour long), has beautiful depictions of the forest and its wildlife, features great music, and teaches good moral lessons (it pays to be kind / greedy people will have their comeuppance).  The strongest element of this adaptation are the character designs by Osamu Tezuka. 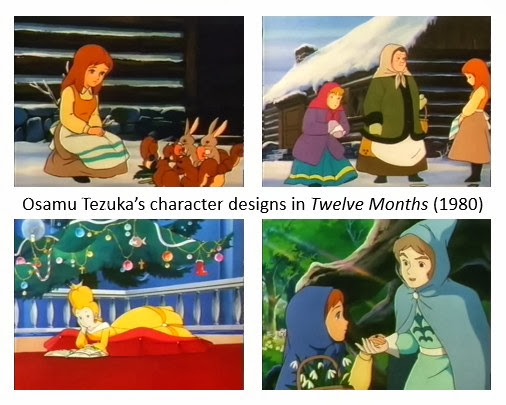 Twelve Months tells the parallel stories of two young girls of the same age, one poor and one rich.  Anja (Shinobu Otake) is an orphaned girl who lives in near poverty in rural Russia with her nasty stepmother and her equally unpleasant stepsister.  Her family forces her to do most of the hard labour of the house such as collecting wood from the forest for their fire.  Anja’s story crosses paths with that of the spoiled young Tsarina (Ai Kanzaki) when she encounters an elderly soldier in the forest in late December.  He helps Anja collect firewood, and she returns the favour by helping the soldier find the perfect fir tree for the Tsarina, who wants to decorate it in time for New Year’s Eve.

Next, the Tsarina, who thinks that the whole world must revolve around her desires, gets it into her head that she wants snow drops for her New Year’s decorations. Unheeding of the fact that it is the wrong season for such flowers, the Tsarina sends out a proclamation informing her subjects that if one of them can bring her a basketful of snow drops she will reward them with a basketful of gold.  Anja’s greedy stepmother and stepsister desperately want the gold, and force Anja to go out alone into a blizzard in search of snow drops.  Just as it seems that she is about to freeze to death in the forest, Anja encounters the spirits of the twelve months around a campfire.  Because they have witnessed her kindness to the forest animals, they offer to help her as long as she promises never to tell anyone where she got the snow drops.  Keeping this secret will prove very hard due to the insatiable desires of the Tsarina.  Needless to say, as it is a fairy tale, the story resolves itself with everyone getting what they deserve. 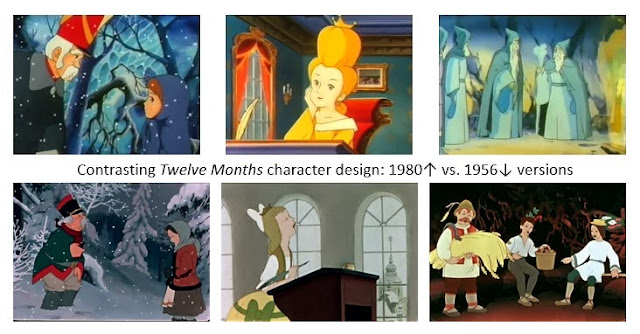 The animation belongs to a series of fairy tale adaptations made by Tōei Dōga in the late 1970s and early 1980s. The series was called Sekai Meisaku Dōwa (世界名作童話), which has been variously translated as World Children's Classics and World Masterpiece Fairy Tales in English.  The series included The Wild Swans (1977), Thumbelina (1978), Swan Lake (1981), and Aladdin and the Magic Lamp (1982).  Twelve Months, also known as “The Forest Lives” / “The Forest That Lives” (direct translation of Japanese title), was adapted from the Samuil Marshak’s Russian fairy tale of the same name by Kimio Yabuki, Ikoku Oyabu and Tomoe Takashi.   Yugo Serikawa was the chief director, with Kimio Yabuki and Tesuo Imazawa acting as co-directors.  The animation was co-produced with the Moscow studio Soyuzmultfilm, who had themselves produced an acclaimed cel animation of Twelve Months in 1956 with the legendary “Patriarch of Soviet animation” Ivan Ivanov-Vano at the helm.

The animation was done in Japan, but the music was composed by Vladimir Krivtsov and performed by the Leningrad Philharmonic Orchestra under the direction of A. S. Dmitriev.  Incidental music was also provided by Shunsuke Kikuchi.  The theme song Don’t Cry (泣かないわ/Nakanaiwa) is sung by Yoshiko Mari.  The song was not composed for the film but had been a hit for Junko Sakurada in 1976 with lyrics by Yū Aku and music by Kōichi Morita.

For this review, I watched the German dub of the film, Anja und die vier Jahreszeiten (Anja and the Four Seasons), which was adapted by Andrea Wagner of ZDF, who did the German text for many anime films and series of the 70s and 80s from Vicky the Viking (1974-5) to The Wonderful Tales of Nils (1980-1) and Alice in Wonderland (1983-4).  The theme song has also been beautifully adapted, but instead of singing about restraining one’s tears, the uncredited singer sings about the four seasons.  I have searched high and low to find out who sings the song but have only found German message boards of people asking in vain about where they can buy the song.  It seems it was never released on CD. If any of my German readers recognize the singer, do let me know.  Here are the lyrics of the German theme song with my translations in square brackets:

[Dear Seasons, we thank you for this lovely time of year x2]

Ohne euch wäre unsere Welt nie so zauberhaft und schön
Ohne euch hätten wir die Welt nie in voller Pracht gesehen
[Without you, our world would not be so magical and beautiful /
Without you, we would never have seen the world in all its splendour]

The German cast for Anja und die vier Jahreszeiten is not yet on Anime News Network, and were a bit tricky to find so I also cite them here:

Posted by Cathy Munroe Hotes at 1:54 am