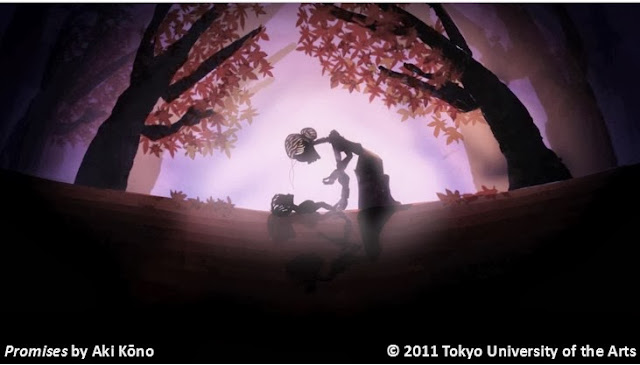 On an autumn day, a woman kneels under the scarlet leaves of trees mourning the loss of her infant son.  As she cries, the winds picks up the remains of her child and leaves only a dark shadow behind.  This dark shadow, the spirit of her dead child, whispers to her that she can take his shadow home with her.  The woman does so, looking after this transparent shadow of a child in the same way she would a living, breathing child.   She lives happily with her secret until one day, a kind of shinigami (spirit of death) in the form of an elderly man comes knocking and asks for the shadow of the child.

After the man leaves, the woman folds the child’s shadow into the shape of a bird in order to hide him from the shinigami.  Soon, there comes another ominous knock at the door.  The shinigami has returned and asks for the shadow of the bird.  He informs her that he is a representative of kami (god) and he has been directed to collect the soul that she has been keeping in her home.  Tears run down her face, and the shinigami offers to make a deal with her.  He asks her to sew herself a doll in the shape of a child and to put the shadow in it.  At first it seems that she has made a deal with the devil as she runs fearfully holding the doll, but could it be that the shinigami is offering her child the chance of resurrection?

Promises (約束 / Yakusoku, 2011) is Shikoku-born animator Aki Kōno’s first silhouette animation.  Her earlier films Youth (青春 / Seishun, 2008) and A brightening life (2010) were stop motion animation using puppets and objects.  This animated short is her graduate work for the Geidai (Tokyo University of the Arts) animation programme, where she was supervised by Yuichi Itō (Knyacki, Norabbits Minutes).   Promises is actually a blend of silhouette and stop motion animation techniques.  The silhouettes are not as flat as the techniques of pioneers like Lotte Reiniger and Noburō Ōfuji – though there was some texture and layering to their films as well.  Kōno’s silhouettes are constructed in three dimensional spaces with other objects being used for special effect such as liquids, string, cloth, and beads.

The choice of silhouette animation suits the shadow theme of the film.  The figures have a roughly hewn feel to them (in contrast to the precisely cut figures of a Lotte Reiniger film) which I think adds to the emotional impact of the film.  The mood of the film is also elevated by Kōno’s striking use of bold background colours, such as flaming reds and cool blues/greens/purples, which reminded me of Ōfuji’s use of background colour in The Phantom Ship (幽霊船/ Yūreisen, 1956).


Kōno wrote the script for Promises in addition to directing and animating it.  It has been seen at both domestic and international festivals and made the Jury Selection at the 2011 Japan Media Arts Festival.  I saw the film at Nippon Connection 2013.