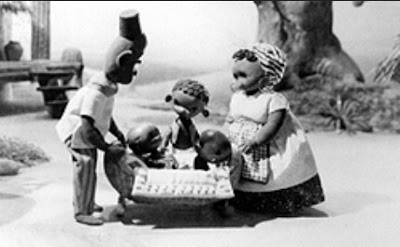 One of the highlights of the Kawamoto-Norstein event at Forum des Images in Paris was the screening of the rare Tadahito Mochinaga film Little Black Sambo and the Twins (Chibikuro Sanbo to futago no otōto, 1957).  During their lecture on the life and career of Kihachirō Kawamoto, animation experts Ilan Nguyen and Serge Éric Ségura showed the opening few minutes of Little Black Sambo (ちびくろさんぼのとらたいじ, 1956) – the film that puppet animation pioneer Mochinaga showed at the first Vancouver International Film Festival and caught the eye of Arthur Rankin, Jr.  (learn more).

Both Little Black Sambo and Little Black Sambo and the Twins are adaptations of books written and illustrated by Scottish children’s author Helen Bannerman (1862-1946).  The Edinburgh-born author lived for much of her life in India where her husband William worked as an officer in the Indian Medical Service.  The heroes of many of her books are south Indian and Tamil children.  The original books were meant to educate and entertain English speaking children about the indigenous Indian and Tamil cultures.  From today’s perspective Bannerman’s work depicts a colonialist view of these cultures in a similar vein as Rudyard Kipling’s The Jungle Book (1894).

The Story of Little Black Sambo was immensely popular in the first half of the 20th century, but unfortunately later US editions of the story replaced Bannerman’s illustrations with racist African stereotypes.  Out of cultural and geographical ignorance, these stories retain the same settings and animals, thus promoting the false notion that tigers, etc. live in Africa.  The most notorious of these is Wizard of Oz illustrator John R. Neill’s 1908 version of Little Black Sambo, which transformed Sambo into an offensive pickaninny character.  This is believed to have contributed to the use of “sambo” as a racist slur.  The poet and social activist Langston Hughes condemned Little Black Sambo in 1935 as a "pickaninny variety" of storybook, "amusing undoubtedly to the white child, but like an unkind word to one who has known too many hurts to enjoy the additional pain of being laughed at." (source) 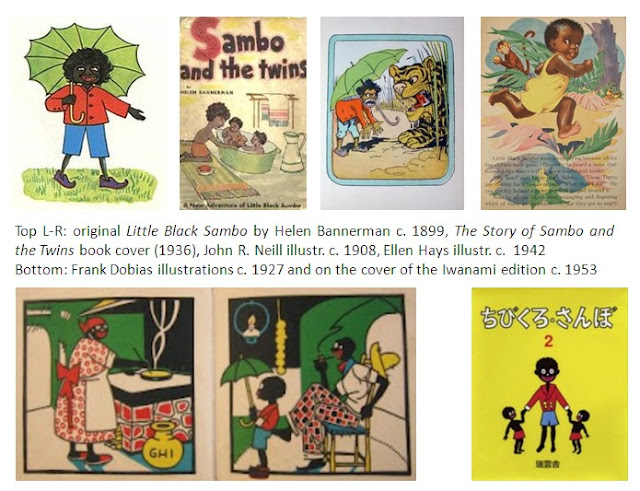 Frank Dobias’s illustrations of the 1927 Macmillan edition of Little Black Sambo are equally as offensive as those of Neill and they are the ones that the Japanese publisher Iwanami Shoten used when they published a Japanese edition of the controversial book.  As this is the most well known version of the stories in Japan, many mistakenly believe it to be the original illustrations of the story.  Other Japanese publishers also created their own editions of the stories.  The book was discontinued in 1988 because of the racist nature of the illustrations, but was recently reprinted by a small press called Zuiunsha with Dobias’s offensive illustrations (learn more).  The quotes from the president of Zuiunsha in this Guardian article demonstrate the publishing company’s complete ignorance as to why the books are considered racist.

Knowing this background, I was somewhat trepidatious about seeing Mochinaga’s film at Forum des images.  It does indeed depict an African child in a non-African /pseudo-African setting full of animals that don’t quite fit the locale, but I was relieved that it was nowhere near as offensive as Ub Iwerks’s cringe-worthy 1935 adaptation of Little Black Sambo that portrayed the characters in “black face” complete with a Mammy caricature who uses stereotypical language such as “Now run along and play honey child, but watch out for that bad ole tiger.  That ole tiger sho’ do like dark meat!” The Iwerks version promotes terrible ignorance about black people in the name of comedy.  For example, in the opening scene, Mammy washes Sambo and it makes the water turn black.

Mochinaga's version of Little Black Sambo and the Twins is not without ethnic stereotyping – Sambo’s mother is a large, round woman who does fit the “Mammy” stereotype.  I am not familiar enough with African landscape and cultures to judge the authenticity of the African characters in the film, but in my estimation the approach taken towards the characters is very different from the Ub Iwerks animated short.  The Iwerks short has clearly exaggerated the black stereotypes in order to get laughs from the audience, whereas the Mochinaga film has gone for the kawaii approach to depicting the black characters.  The ethnicity of the central characters is not exaggerated for the sake of laughs, rather Sambo and his family are depicted in a loving way.  The laughs in the film are either of the pratfall variety or at the funny things that children and animals do that we recognize from our own lives.


The Kawamoto-made puppets also do not resemble the Dobias illustrations familiar to Japanese children.  The African characters do not have exaggerated lips and eyes.  At least, the eyes are not exaggerated in the tradition of the pickaninny caricature.    They are large and doe-like – the kind of Bambi eyes that we today associate with anime.  In contrast to the mother, the father is tall and slender and wears what appears to be a fez – giving him a very North African look.  This suggests that Mochinaga and Kawamoto made an effort to learn about African dress, but did not necessarily stick to one particular African culture.  The characters do have large ears, but no more so than white and Asian characters made by Mochinaga and Kawamoto in the 1950s and 1960s.  Apart from the darker skin tone and the curly hair, the children look very much like dolls and illustrations of Japanese children from the early to middle 20th century. 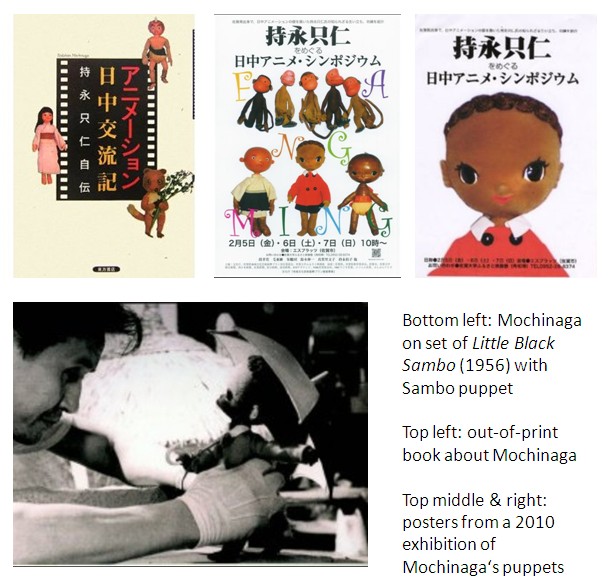 The story of Little Black Sambo and the Twins is quite straightforward.  Sambo’s parents have to run an errand and they leave Sambo at home to babysit his twin brothers.  Sambo is a very responsible brother, but when he takes his eyes off the twins for a moment to do a chore, an oversized vulture (at least three times larger than the toddler twins - in fact, it is so big that in the opening credits when it is flying around in the background, I thought it was a dragon) kidnaps the twins and holds them captive at the top of a tall tree.  A pair of friendly monkeys offer to help Sambo find his siblings.  They are aided by a friendly tropical bird (possibly a parrot?) who leads them to the tree where the twins are being held captive.  While the vulture is away checking on his/her own children, Sambo and the monkeys climb the tree to rescue the twins.  The vulture returns before the second twin is safely on the ground and Sambo engages in a fight with the bird.  As Sambo is fighting the vulture, his parents return to find their children missing and follow the noise of the fight to come to their children’s aid.  The story ends with the family happily reunited.  They hold a celebratory feast and thank their animal friends for their assistance.

In the original story by Helen Bannerman, the twins (unfortunately named “Woof” and “Moof”) are kidnapped by evil monkeys and an eagle aids Sambo in rescuing the young boys.  I have never read the Japanese edition of this storybook so I do not know whether or not the changes in the story were written by Mochinaga and his screenwriter Haruo Mura or by the translator of the Japanese edition of the storybook.  Whatever the case, the Mochinaga puppet animation is presenting a common storyline in children’s literature: the family unit is threatened by an outside force, the members of the family join forces to combat this threat, and the story ends with the family intact again.  The anamorphic animals add interest for children, and one can imagine children who view this film re-enacting the dramatic scenes with their own toys at home.

The film is shot in black and white – which was quite common in the 1950s due to the cost of colour film stock.  It is also possible that the film was made with television in mind, and television was in black and white in those early years.  The puppets that Kawamoto made are sweet.  The faces are very expressive and the costuming and sets have been beautifully designed – simple and straightforward so as not to distract from the expression of the character movement.  It is a first rate puppet film for the 1950s – not as complex and elaborate as the works of Jiri Trnka and other Eastern European animators of the time, but certainly very well planned and executed.

Although it is clear that Little Black Sambo and the Twins was meant for preschool aged children, it is not something I would watch with young children not only because of the inaccurate portrayal of African people but also because it could instil in them an irrational fear of large birds of prey.  That being said, it is a shame that this and Mochinaga’s other puppet animation films are not more widely available for they are invaluable to the study of animation history and to the study of the portrayal of ethnic minorities in Japanese culture.