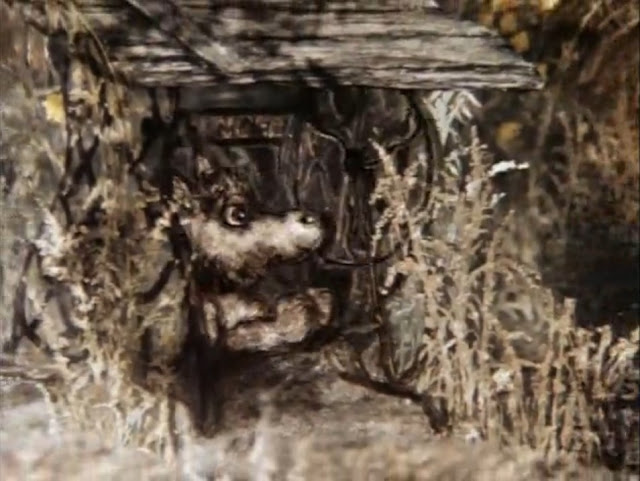 I rose early on Saturday and hit the streets of Paris on foot to take in the sights before great swarms of tourists descended.  As a cineaste, one feels a sense of déjà vu around every corner in Paris as I recognized landmarks and architectural features from the films of Jean-Luc Godard, Krzysztof Kieślowski, and many others.

After brunch, I headed to the Centre Pompidou because I had heard from Akino Kondoh (official website) about the event Planète Manga being held there until May 27th.   The event is great for Parisians, for it means that many wonderful animated films are being screened at the Pompidou this spring from early anime like Kenzō Masaoka’s The Spider and the Tulip (read review) to Satoshi Kon’s Tokyo Godfathers (read review), but unfortunately for me there was no accompanying exhibition.  I did follow the manga sound effects painted on the floor to have a peek in the Planète Manga salon where a workshop was being held for young people interested in drawing their own manga. 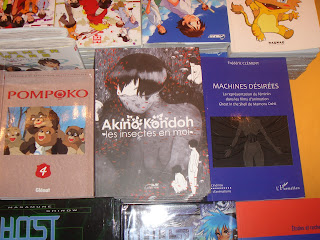 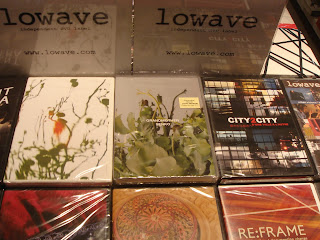 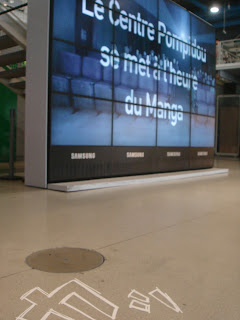 My trip to the Pompidou was not in vain; however, for the bookstore there had an exciting selection of French releases of manga and anime including everything from Akino Kondoh’s Les insects en moi to a photobook tie-in for the latest Gorō Miyazaki film From Up on Poppy Hill and from Paprika to Winter Days.  There were a load of DVDs that I had to add to my wish list for my budget could not stretch to buying them on this trip.  As the Cinéma du Réel was also on in the basement of the Pompidou, the bookstore had copies of two trilingual (JP/FR/EN) DVDs of the films of Yuki Kawamura (official website), a Japanese filmmaker who is based in Paris.  Rather than buy something for myself, I decided to pick up something for the kids.  I passed on the over-priced Takashi Murakami stuffed toys and went for the Nano Blocks (official website). 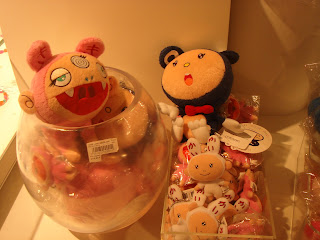 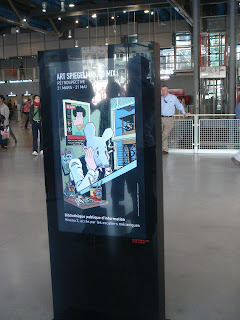 In addition, the library housed in the Centre Pompidou is running a free exhibition called Art Spiegelman Co-Mix featuring original art by one of the greatest living comic artists.  There was a wide range of illustrative work on display from Maus-related materials (including a long interview Spiegelman did with his father in the 1970s) to In the Shadow of No Towers (post 9/11 theme) and his cover art for The New Yorker.  For those not able to catch this exhibition at the Pompidou library, the next best thing is to purchase the amazing books MetaMaus (includes DVD) and Art Spiegelman Co-Mix. 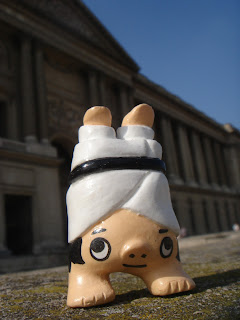 I skipped the first screening at Forum des Images on this day, for I have both the US and Japanese DVDs of Kawamoto’s short puppet films (see: Kawamoto's Animated Shorts on DVD).  Instead, I took a stroll around the grounds of the Louvre to do a short photo shoot with Sakadachi-kun.  As my long time readers will know, I began writing about alternative Japanese animation upon the discovery of Tomoyasu Murata’s films in late 2006.  Sakadachi-kun (aka Handstand Boy) is the central character in a series of films by Murata, and I have recently started a tumblr called The Adventures of Sakadachi-kun where I feature photographs I have taken of my figurine of Sakadachi-kun as he joins me in my travels.  The titles of each photograph are a parody of the titles of the Sakadachi-kun films.

At 16:30, I attended the screening of Yuri Norstein’s major works:  The Heron and the Crane (1974), The Hedgehog in the Fog (1975), Tale of Tales (1979) and 30 minutes from The Overcoat (unfinished).  On more than one occasion over the weekend, Norstein voiced his delight in being able to screen his works on 35mm.  He had been told that 35mm films were being thrown in the garbage and he feels that it is the best medium for watching not only his films, but films in general.  In introducing this programme of shorts, Norstein likened our experience to having his whole life in capsule form. 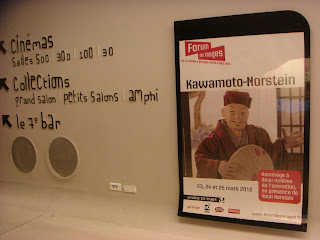 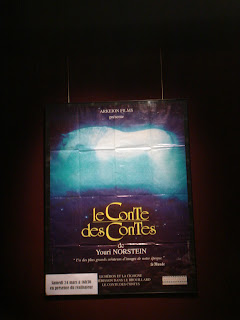 Another theme that Norstein raised over the weekend was the cultural importance of art.  At this screening he said that we are living in very difficult times and that in such times art is what brings people together.  This was certainly true at the Forum des Images where the audiences were really captivated by the films.  There was applause between each film and an enthusiastic standing ovation at the end.  The audience seemed to adore Tale of Tales in particular.

It is truly a magical experience watching Norstein’s films in a cinema projected on 35mm.  It is difficult to find words to describe the different between the colours and textures on film as opposed to in a digital format – for it is a difference that one can not only see but feel.  The only drawback to seeing the works on film was of course the wear and tear of age on the film.  In The Heron and the Crane in particular the white of the background and the white of the two birds washed together as some detail had been lost due to age.  In contrast, The Hedgehog in the Fog and Tale of Tales looked amazing on film as one can see the details of the textures and layering very clearly in this format.

The main programme of short films was followed by the four commercials Norstein did for a Russian sugar company in the mid-1990s and clips from the animation that he did for the Russian television programme Good Night, Children.  Before and after the screenings, Norstein voiced his regret at having to do commercial work to make a living.  He seemed nostalgic for the USSR days when there was a higher regard for the role of an artist in society.

After the screening, someone in the audience asked him if there is any modern animation that he likes and he replied that nothing really interests him about computer animation.  He did say that he had respect for Pixar, but he seemed to feel that computers were leading the art rather than merely being at the service of art.