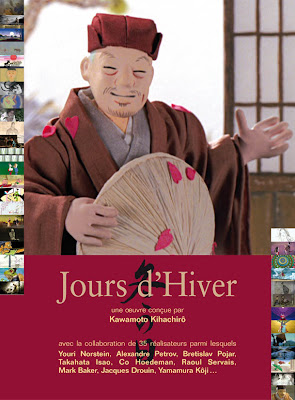 On Friday, March 23rd, I took the ICE train from Frankfurt to Paris to attend the event Kawamoto-Norstein: The Puppet Master and the Painter Animator at Forum des Images.  The opening event was an exciting affair for not only was the legendary Russian animator Yuri Norstein there as a guest, but the Canadian pinscreen animator Jacques Drouin and one half of the Brothers Quay were also in the audience.  Drouin was one of the 35 animators who contributed a stanza to Winter Days (read review), and this was a rare opportunity to see the film on 35mm.

The event was hosted by Isabelle Vanini (Forum des Images programmer) and Ilan Nguyen (Tokyo University of the Arts).  Kihachirō Kawamoto, in whose memory this event was dedicated, had been to Forum des Images on three occasions.  On one of these occasions, he presented Winter Days.   This 2003 event was captured on video and we got to watch footage of Kawamoto introducing the film.  This was followed by Kawamoto’s Self Portrait (read review) and as part of the introduction to Winter Days, Norstein shared some of his memories and impressions of Kawamoto.

Norstein spoke of the great pleasure that Kawamoto took in making films with friends, and he joked that he had once seen a photo of Kawamoto at aged 3 and that it struck him that Kawamoto had never aged.  He still looked exactly the same.  Norstein felt that Kawamoto never grew up.  He retained his sense of childlike joy, and this could be heard in his infectious laugh.

As Norstein spoke, a photograph of the two men together holding a puppet from Winter Days was projected on the screen behind him.  Kawamoto apparently gave this puppet to Norstein as a gift.  The last time that Norstein and Kawamoto spoke together, Kawamoto expressed an interested in making a film about the life of the Chinese poet Li Po.  I found this interesting because Kawamoto had made a short short animation for an Absolute Vodka internet campaign in 1997 (read review) in which the poet drinks vodka under flowering cherry blossoms.

Kawamoto came up with the idea of adapting the renku poem Winter Days after a discussion with Norstein in which Norstein expressed a wish to someday adapt the haiku poems of Bashō into animation.  This is why Norstein was honoured with the task of adapting the first stanza of Winter Days.  It was Norstein’s own idea to introduce an encounter between Chikusai and Basho in his interpretation of the first stanza.  Read more about this at Anipages.  Kawamoto was delighted with the idea, and Norstein said that his contribution was well received by Japanese audiences though he himself was not fully convinced because he is a perfectionist and always thinks he can do better.

I have watched Winter Days on DVD many times but this was my first time watching it on 35mm.  It’s a very different experience watching it on 35mm – the colours are so different, the luminosity of the image is different, my awareness of depth of frame was heightened, and I noticed many interesting textures in some of the films that I had not before. The screening was followed by the “Making Of” documentary that appears on the DVD and this was in turn followed by questions from the general public.  During the discussions, a slideshow of rare images of Kawamoto screened.

One audience member was struck by the music that was used in Winter Days.  The composition masterfully acts not only as an accompaniment to the action of each stanza, but also aids in creating a sense of continuity between each short short.  Norstein was unable to answer this question, but Nguyen was able to identify to composer as Shinichirō Ikebe, who also did the soundtrack to Kawamoto’s short film Tabi (1973).  Ikebe is, of course, well known to fans of Japanese cinema for his work composing the soundtracks to many Akira Kurosawa films (Kagemusha, Madadayo, Dreams, etc.).  He has also worked on several Shōhei Imamura films such as Vengeance is Mine (1979), The Battle of Narayama (1983), The Eel (1997), and Warm Water Under a Red Bridge (2001).  Hayao Miyazaki’s anime TV series Future Boy Conan (1978) was also scored by Ikebe.

One audience member seemed disgruntled that Winter Days appeared to only have had men work on it.  This false impression was given by the Making Of documentary, which only features male animators.  There was footage taken of the female animators at work among the extras on the Japanese DVD, but this didn’t make it into the edited Making Of doc which due to time constraints only included 17 animators.  There is an expensive box set edition of Winter Days available in Japan, and I have heard that it contains extended interviews with all participants.

Noriko Morita does a lot of collaborative dance performances, often bringing together animation, music, and dance in innovative video installation performances.  See her profile at Monstra this year.

Reiko Okuyama and her husband Yoichi Kotabe collaborated on one stanza using Okuyama’s distinctive copperplate engraving technique.  Okuyama, who sadly passed away in 2007, worked on many classic Toei Doga animated films and series.  (read more about her).

Maya Yonesho, a stop motion animator who divides her time between Europe and Japan (read more about her).

Uruma Delvi, a husband and wife team specializing in flash animation.  Check out their official website.

Azuru Ishiiki, who in addition to working as an animator is known as a Shimai dancer (see image of her dancing, see her JAA profile)

Yuko Asano is an amazing puppet animator (see her website)

I.K.I.F. (half of which is female animator Sonoko Ishida).  I.K.I.F. have done special effects on loads of anime films from Pat Labor to Doraemon.

Stop motion animation pioneer Fusako Yusaki, who has lived and worked in Italy since the 1960s. (read more about her)

I should also mention that many male animators have women (often their partners/spouses or former students) working as assistants on their films.  Most notably, Yuri Norstein’s wife Francheska Yarbusova and Kōji Yamamura’s wife Sanae Yamamura – both of whom are very talented artists in their own rights.

Someone asked Norstein about how he overcame the language barrier in order to communicate with Kawamoto.  He explained that he had a translator, but he also joked that after drinking sake, one understands everything.  I was impressed by how spry Norstein was for someone of his age.  He became especially animated when talking about Kawamoto, and I really felt that a lot of the complements that he paid to Kawamoto (eternally youthful, full of good humour and joie de vivre) could also be applied to Norstein himself.  He deflected an impertinent question about his ongoing adaptation of Nikolai Gogol’s The Overcoat with a joke. My French is a bit rusty, but it was something about how he is only the pilot of the plane.  The implication being, I suppose, that the pilot is not in control of the weather and turbulence he might encounter along the way.

All in all, it was a very pleasant and informative evening – followed by a wine and cheese where I got to chat a little bit with Alexis Hunot of Zewebanim and met some of his students.   I also met Marc Aguesse of  Catsuka.  More on my animation weekend in Paris in coming instalments.