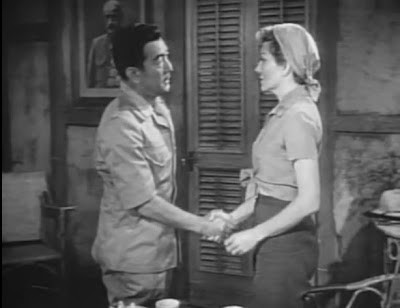 In 2001, I was writing a paper on Nagisa Oshima’s Merry Christmas, Mr. Lawrence (1983), and decided to find out if any American films had tried, as I feel Oshima did, to understand the horror of Pacific War from both the Japanese and the Allied perspectives.  Among the predictable John Wayne war films like They Were Expendable (John Ford, 1945) and Back to Bataan (Edward Dmytyk, 1945), I discovered the remarkable 1950 film Three Came Home (Jean Negulesco, 1950).

The story is an adaptation of Agnes Newton Keith’s memoir Three Came Home (1948) about her experiences as a prisoner of the Japanese during World War II in North Borneo (today called Sabah) and Sarawak.  An American writer married to British forester Harry Keith, Agnes made a name for herself shortly before the war with her bestselling memoir Land Below Wind (1939) which painted a idyllic portrait of her early married life, the land and the people of Sandakan – then the capital of British North Borneo.

The film begins with the growing unease of the British inhabitants of Sandakan as they hear radio reports about the escalating war.  After the attack on Pearl Harbor and the fall of Singapore, many husbands begin sending their wives and children back home.  Agnes; however,  refuses to leave her husband’s side.  When the Japanese invade British North Borneo, Agnes, Harry, and their young son George become prisoners-of-war.

Agnes and George are separated from Harry and imprisoned first on Berhala Island and then they are shipped to the Bau Lintang camp near Kuching.  The women and children do not receive any special treatment and are forced to live on the edge of starvation in primitive conditions.  A Hollywood film of that era could not really capture the horror of the living conditions in the camp (lack of clothes and diapers, lack of hygiene and clean water, widespread disease) as Agnes does so movingly in her book, but the film does not sugar coat the situation either.  It is a rare look at the Pacific War from the perspective of an American mother.  The film was also shot on location as much as possible which gives it an air of authenticity.

Although Nunnally Johnson’s screenplay embellishes some parts of the story (a massacre of horny Australians, the stereotyping of the brutal Nekata as a hulking oaf) and leaves out some important aspects (the complexity of Anges’ relationship with Lieutenant Colonel Tatsuji Suga, how she made toys for her son, how she buried notes that she dug up later in order to keep a record of her ordeal), on the whole the film captures the essence of Agnes Newton Keith’s wartime experience.  She went through hell on earth in that prisoner-of-war camp, but emerged from the war with a surprising lack of bitterness.  Somehow, despite having had a miscarriage brought on by the stress of detainment and witnessing/experiencing torture and other cruel behaviour from the Japanese soldiers, Agnes did not learn to hate the Japanese.  She learned to hate war and what war does to humanity.  The film retains her sense of balance by showing the small gestures of good will made by some Japanese soldiers (such as the doctor secretly giving Agnes medicine)  in contrast to the cruelty and inhumanity of others (Nekata, the anonymous soldier who assaults her).

The casting of Three Came Home was really key to making this work for Jean Negulesco.  Claudette Colbert (It Happened One Night, The Gilded Lily) plays Agnes – ideal casting because the women were about the same age and Colbert had a great range as an actress.  Colbert was nearing the end of her peak as an actress as there were (and still are) few good roles written for older women in Hollywood.  She unfortunately was injured during the Three Came Home shoot and lost out on the role of Margo Channing in All About Eve (Joseph L. Mankiewicz, 1950) – a role which Mankiewicz had written with her in mind.

The real success of the film hinges on the casting of Sessue Hayakawa (The Cheat, The Bridge on the River Kwai) as Col. Suga.  Hayakawa had been a major Hollywood star during the silent era, but his star had waned with the coming of sound and he was stuck in France for the duration of the war under the German Occupation having gone there to star in French films directed by Max Ophüls, Marcel L'Herbier, and others.  Humphrey Bogart’s production company tracked him down to have him star as Baron Kimura in Tokyo Joe (1949).  As a seasoned actor, Hayakawa brings sense of humanity to the role of Suga – without giving this depth of character to the enemy, Negulesco would not have been able to really capture the core message of Agnes’ memoir:

“If there are tears shed here, they are for the death of good feeling.  If there is horror, it is for those who speak indifferently of ‘the next war’.  If there is hate, it is for hateful qualities, not nations.  If there is love, it is because this alone kept me alive and sane.” (Three Came Home, p.9)