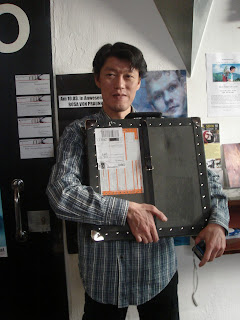 This week’s screenings of the award-winning animation Summer Days With Coo (2007) at Mal Seh’n cinema in Frankfurt on Tuesday and at the Japan Foundation in Cologne were cancelled in order to observe a period of mourning for the victims of the earthquake and tsunami that have devastated the Tohoku region. I have been in a state of shock and sorrow at the events unfolding in Japan and I would recommend that readers of this blog support the relief effort in Tohoku by donating money to the Japan Earthquake Relief Fund. This fund is being administrated by the Japan Society with 100% of proceeds going to organizations that will directly help those in need.
In spite of having experienced the earthquake first-hand in Tokyo on Friday, Keiichi Hara (原 恵一, 1959) still managed to fly to Germany on Saturday and graciously gave fans in Frankfurt an opportunity to ask him questions about his career at the Mal Seh’n cinema. The program opened with a moment’s silence for the victims of the natural disaster. Hara was then interviewed via an interpreter by German animation expert Andreas Platthaus. The following is a summary of some of the key points that arose during their discussion.


Although Hara studied animation at Tokyo Designer Gakuin College, he initially found it difficult to get into the animation industry. He began his career working in PR eiga before being invited to join Shin-Ei Animation in 1982. Hara said that he was really lucky to have had a mentor who helped his career advance because not all animators are so lucky. In particular, Hara’s career was influenced by animation director Tsutomu Shibayama when he was doing storyboards for the Doraemon franchise.


When he was starting out, Hara was a big fan of Hayao Miyazaki, particularly Nausicaä of the Valley of the Wind (1984). He was also a big fan of 1950s Japanese cinema. As Hara came of age in the late 1970s / early 1980s, Andreas Platthaus wondered if Hara had become introduced to 1950s movies through television. Hara replied that as a young man he had been a big fan of the films of Steven Spielberg, Francis Ford Coppola, and George Lucas. He noticed that these American directors frequently cited the names of Japanese filmmakers in interviews so he decided to investigate the directors they mentioned. This was how he came to discover 1950s Japanese cinema, and Hara cited the films of Akira Kurosawa (1910-1998) and Keisuke Kinoshita (1912-1998) as having been particularly influential on him. Hara’s diverse filmic interests became apparent at the end of this event when he addressed the audience and asked what Germans thought about Werner Herzog’s film Fitzcarraldo (1982). The film seemed to hold a particular fascination for him and Hara knew many details about the film’s production. 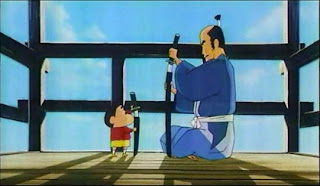 Why did Hara stop making the Crayon Shin-chan films?


During the Crayon Shin-chan phase of his career his partner asked him if there wasn’t something more that he wanted to do creatively. Eventually he had to make a decision about whether to continue in the Crayon Shin-chan franchise or to stop altogether and take his career in a new direction. The idea of making a film about a kappa (a water sprite from Japanese folklore) was something he had carried around in his heart with him for a long time and he decided to follow his heart. 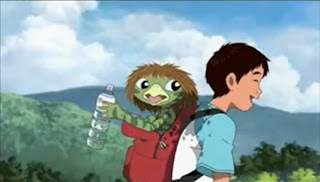 
Most animated films are adaptations of popular manga in Japan, but Hara decided to look elsewhere for inspiration for his Kappa animation. While looking through children’s literature, Hara eventually discovered a Kappa story that appealed to him by the author Yuichi Watanabe. Although he used Watanabe’s tale for inspiration, Hara said that in general he does not like to stick too closely to the source material but to make the story his own. As a result, Hara’s adaptation was aimed at a much older audience than the original tale. Hara was particularly interested in exploring the ambiguities of the Kappa fable. Everyone in Japan knows what a Kappa is, some have claimed to have seen a Kappa, while others are much more skeptical as to its existence. Andreas Platthaus asked how the film had been received outside of Japan, where few would know the folktale. Hara replied that when the film was shown in France, it received a similar response as in Japan, and he had the impression that foreign audiences actually brought even more understanding to the film.
Andreas Platthaus mentioned that some of the subject matter in Summer Days with Coo would be avoided in Western animation for fear of shocking audiences and he wondered if Japanese animators had more freedom in this regard. Hara responded that he had purposefully wanted his film to be a bit harder – it was not intended for the amusement of children, rather he wanted to take on more serious subject matters. Hara himself grew up reading manga where death and other heavy themes played an important role and he didn’t want to hold anything back when making his films.


Nippon Connection is planning to screen Hara’s latest film Colorful as their closing night film this year. and Platthaus asked Hara to explain a bit about the film. Hara said that the themes of Colorful were even more weighty than those of Summer Days with Coo. Some of these weighty themes include bullying, a middle school student falling into prostitution, and death and the afterlife. It is based on the novel by Eto Mori
“Program Pictures” vs. Independent Animation


Platthaus noted that it took three years for Hara to produce Summer Days with Coo and another three years for Colorful to be released and asked if Hara found these films more difficult to make than the Crayon Shin-chan films. With “program pictures” like the Crayon Shin-chan films, Hara explained that one knows ahead of time how many screens it will play on and what kind of an audience will watch the film so it makes it a lot easier to get the production under way. With independent animation, these things are not as certain and as such it is much more difficult to arrange for funding. When asked about his future projects, Hara said that he is in talks with his business partners about his next project but that it is at too early a stage for him to share with us what that project will be. It seems likely that it will be at least two years before we can expect to see another film from Hara.
Although I was disappointed not to see Summer Days with Coo this week, the film fortunately came out on DVD on the 15th of March here in Germany so I should have my hands on a copy soon and will review it posthaste.