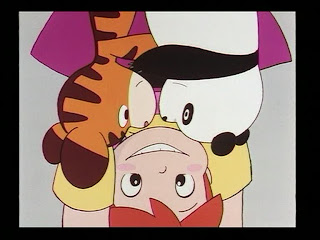 The sequel to Panda! Go, Panda! (1972), Isao Takahata’s Panda! Go, Panda! Rainy Day Circus (パンダ・コパンダ 雨降りサー スの巻, 1973) opens with the young heroine Mimiko still living harmoniously with her adopted Panda family in her large house in a bamboo forest. A circus ringmaster and his assistant come to pry around the house in search of a baby Tiger who has escaped their circus wagons. They boldly enter the house only to be scared away by the Pandas and Mimiko.
The story then begins to unfold in a similar manner to that of Goldilocks and the Three Bears

. All of the furniture and items in the house are sized biggest to smallest for Papanda (the Papa panda), Mimiko, and Pan-chan (the baby panda). Pan-chan discovers that someone has eaten all of his curry. Mimiko laughs and refills his bowl for him, not quite taking him seriously. After supper, Pan-chan discovers that someone has dirtied his towel and broken his trumpet. He then follows the trail of dirty paw prints to discover a baby tiger ‘Tora-chan’ curled up in his bed. The two of them are equally frightened of each other and chase each other in circles around Papanda and Mimiko. It does not take long for them to discover that they have nothing to fear and Tora-chan is quickly adopted into the surrogate family.
The next day, Tora-chan leads Pan-chan to the circus to show him where he comes from, and Mimiko separately goes to the circus with some school friends. This film follows a similar pattern to the first Panda! Go, Panda! film, with Pan-chan creating chaos in an unfamiliar setting (this time the circus). After an amusing sequence in which Pan-chan wreaks hovoc doing acrobatics on a ball, Tora-chan gets reunited with his mother and Pan-chan is reunited with Mimiko.
That night, a storm descends upon the town. When Mimiko and her panda family awake, they discover that the ground floor of their house has flooded. They are amused by this new turn of events, until they discover a distress note from Tora-chan in a ball. They set off for the circus in order to rescue the animals from their flooded circus train.
In the opening scene of the first film, a sign on the train platform indicated that the town where Mimiko lives is called Kita-Akitsu – which is a real town in the same part of Saitama that Hayao Miyazaki (who did the story, scripts, and layout) used for the setting of My Neighbour Totoro

. However, the buildings in the town look more like small town Europe than Japan. As I mentioned in my review of the first film, Mimiko is based largely on the concept Miyazaki had for the failed Pippi Longstocking film he had planned with Takahata and Yoichi Kotabe. It has been said that their visit to Visby, Sweden had a strong influence on the setting for Miyazaki’s 1989 film Kiki’s Delivery Service

. It seems likely that this trip to Europe may have influenced the setting for the Panda! Go, Panda! films. Apart from the bamboo forest, the fact that they eat curry instead of soup in the Goldilocks sequence, and the brief appearance of a torii (a red gate found at the entrance to Shinto shrines), there are few indicators that the setting is Japanese.
The way in which Papanda dances and jumps about as he rescues the circus animals will also once again remind Ghibli fans of Big Totoro. The opening credits for the film features a line of dancing pandas in a style that was also repeated during the opening credits for My Neighbour Totoro

. I am sure that there are many more little “Ghiblisms” that I didn’t catch on first viewing – although the intended audience for this film was children, it’s fun for Ghilbi fans to watch because of all the stylistic similarities to later Ghibli projects.
As with the first film, Panda! Go, Panda! Rainy Day Circus

is half the length of a typical feature film, making it perfect for the attention span of pre-schoolers. It is jam-packed with sight gags and an exciting rescue sequence that will have young children begging to watch it again and again.
© Catherine Munroe Hotes 2011
More Ghibli-Related Posts:
Panda! Go, Panda (1972)

Posted by Cathy Munroe Hotes at 12:16 am