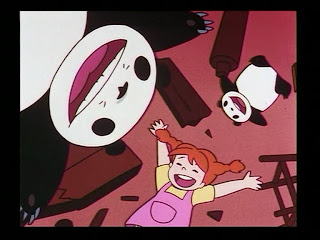 If your children love My Neighbour Totor

o (Tonari no Totoro, 1988), then they will be equally enchanted by the short film Panda! Go, Panda! (パンダ・コパンダ, 1972) and it’s 1973 sequel Panda! Go, Panda! Rainy Day Circus (パンダ・コパンダ 雨降りサー スの巻). The films were written and conceived by Totoro director Hayao Miyazaki and directed by his later Studio Ghibli partner Isao Takahata (Graveyard of the Fireflies

, My Neighbours the Yamadas

).
The films were made in order to cash in on the panda craze sweeping the nation after two pandas were brought to Ueno Zoo from China in October 1972. The main character is a vivacious young orphaned girl named Mimiko. The film begins with Mimiko escorting her elderly grandmother to the train station. It’s unclear why the grandmother has to leave the elementary school girl to her own devices, but Mimiko reassures her that she will be able to manage in her absence. Mimiko then returns to her large home in a bamboo forest, cheerfully greeting the townsfolk she encounters along the way. At home, she discovers a baby Panda bear called ‘Pan-chan’, whom she welcomes into her home. They are soon joined by the Pan-chan’s father, whom they call ‘Papanda’. Won over by the panda bears’ friendliness, Mimiko quickly forms a surrogate family with them, filling in the role of Pan-chan’s mother.
Mimiko cooks for the pandas and directs Papanda in how a Papa should behave: wearing a hat, reading the newspaper, smoking a pipe, and going to work every day. Papanda is a bit flummoxed by the idea of work, but he plays along with her. When Mimiko leaves for school, Pan-chan tags along despite Mimiko’s pleas for him to stay at home. This, of course, leads to disaster. Throughout all of their adventures, Mimiko writes to her grandmother faithfully to keep her updated as to the unusual goings on in their home.
Watching the film, Studio Ghibli fans will immediately recognize familiar themes, settings, and characters from later TV anime series and films directed by Takahata and Miyazaki. The careful observer can spot at the very beginning that the train station is called Kita-Akitsu. This town is located in Tokorozawa – the same part of Saitama that Miyazaki used for the setting of My Neighbour Totoro and where he also lives. However, the setting in Panda! Go, Panda! lacks the realism of the houses and landscape of My Neighbour Totoro. It’s a much more idealized, Western-style setting with occasional Japanese touches like the bamboo forest. The Totoro connection is made even stronger for contemporary viewers by the fact that Papanda resembles Big Totoro in terms of body shape and movement. 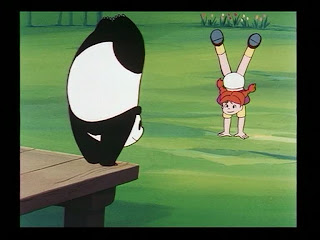 With her round smiling face and penchant for wearing a short dress that reveals her panties, Mimiko has much in common with Mei-chan from Totoro and Heidi, from Takahata’s Heidi, Girl of the Alps (1974).  Her unruly red braided hair is instantly recognizable as that of Pippi Longstocking. Mimiko's appearance and character was heavily influenced by Takahata, Miyazaki and Yoichi Kotabe’s failed attempt to make an adaptation of Pippi Longstocking

in 1971 (Astrid Lindgren refused to give them the rights to the story).
As with all the young female characters in Takahata/Miyazaki films, Mimiko is a very self sufficient girl. The theme of children home alone (Totoro

) or left to their own devices (Grave of the Fireflies

) is a significant one in the Studio Ghibli output. This partly reflects the fact that the Japanese demand self sufficiency from their children at a much younger age than one might expect in Western countries. Unlike over-protective North American and English parents who drive their kids to school and pick them up again, even the youngest school children in Japan are expected to walk to school on their own. In central Tokyo it is not unusual to see young children in uniform taking public transit to and from school without parental accompaniment.
The film is packed full of delightful sequences of Mimiko playing house or frolicking with Pan-chan and Papanda. The sight gags will keep children under the age of 10 in stitches, and delight their parents as well. The plot is driven by the question of whether or not the Pandas will stay living with Mimiko, or if they will be rounded up and returned to the zoo from which they escaped.
More on Mimiko, Pan-chan, and Papanda in my forthcoming review of the sequel: Panda! Go, Panda! Rainy Day Circus (1973).

Posted by Cathy Munroe Hotes at 7:45 am