Mirai Mizue's Timbre A to Z, A Short-Short Animation Series (2011) 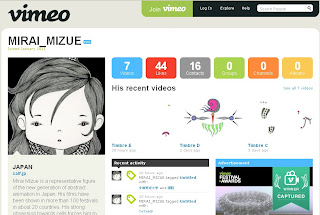 
Last year, it seemed that the abstract animator Mirai Mizue was moving in the direction of more and more complexity in his animation. His film Jam (2009), in his distinctive cell animation style literally jam-packed the screen with his little cell creatures. The number of cells and the complexity of movement increased along with the increased as the music crescendoed and increased in tempo.

Likewise, Mizue’s geometric animations Modern (2010) and Metropolis (2010) are highly complex pieces of work. Modern was made using isometric drawings, with Mizue limiting himself to only using transformations of rectangular parallelepipeds.

This month sees Mizue moving in the opposite direction towards minimalism. In his new Timbre A-Z short animation series, he is focussing on matching his animation to the timbre and rhythms of a variety of sounds. Timbre is sometimes referred to as “the colour of music.” In fact, like the German Klangfarbe, the Japanese for timbre is oniro (aka onshoku or neiro 音色) which literally means “the colour of music”.

Mizue’s experiments with music and animation recall, of course, the experiments of Norman McLaren and Oskar Fischinger in this direction. It also reminds me of a recording I once heard of Norman McLaren being interviewed by the pianist Glenn Gould on CBC Radio in which they discussed the way in which they both “see” music. Unfortunately, it does not yet seem to have made it up onto the CBC Digital Archives. One can; however, find Norman McLaren and René Jodoin’s Spheres (1969), which is an animated interpretation of Glenn Gould playing Bach.
Mizue has challenged himself to post one 30 second animation a day for 26 days – one animation for each letter of the Roman alphabet. The splashes of colour against a white background are beautiful in their simplicity. You can follow his progress on Vimeo or Youtube.

To learn more about Mirai Mizue, read my review of his Collected Works DVD.