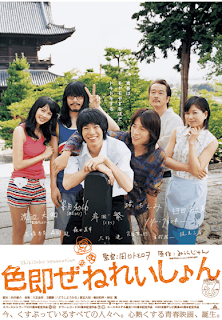 The screening last night of Oh, My Buddha! (Shikisoku Zenereishon, 2009) at Nippon Connection was a big hit. We were joined by the gregarious director Tomorowo Taguchi (田口 トモロヲ, b. 1957) who both introduced the film and answered questions afterwards.
The film is set in Kyoto in the 1970s, and Taguchi spoke of the great lengths that his film crew went through in order to find appropriate filming locations. The geography of Kyoto, like most Japanese cities, has been transformed by development in the past thirty years, so Taguchi said that it was a real challenge to find authentic locations. His continuity people did a great job. I had my eyes open for any continuity errors, like the odd keitai straying into the shot, but didn’t spot any. Taguchi also managed to avoid making the film nostalgic or sentimental, as many directors do when making films set in the years when they were young.
Oh, My Buddha! is a candid portrayal of male adolescence shown from the perspective of Jun Inui (Daichi Watanabe, b. 1990). Watanabe, with his infectious toothy grin, nailed the role of Jun. During the question and answer period I asked about his age, and Taguchi explained that when casting the film they deliberately set out to find a teenager for the role who had no previous film acting experience and he also had to be a ‘cherry boy’. Taguchi stressed how important it was to him to create an authentic picture of Jun and his friends, teenage boys who are desperate for their first sexual experience. In fact, the first kiss that Jun experiences in the film was also Watanabe’s first kiss in real life.
Watanabe was really the perfect casting choice for the role of Jun because he has on the one hand the naïveté and gawky awkwardness of a teenage boy, and on the other hand when he sings and plays guitar he has the swagger needed to perform live in front of an audience. This swagger comes from the fact that he belongs to a punk rock band called Kuro Neko Chelsea (黒猫チェルシー) who released their first album “All de Fashion” in 2009.

All de Fashion
Kuroneko Chelsea
The movie depicted those teenaged years so remarkably well that many in the audience thought that the film must be partly autobiographical on the part of the director. Tomorowo Taguchi, while admitting that the film does depict his own generation, was quick to give the credit to his good friend Jun Miura, who wrote the novel on which the film was based and to screenwriter Kōsuke Mukai (Linda Linda Linda

) who did the adaptation. Taguchi described the film as the joint visions of the writers, himself and his producer, Masaki Kai (Fine, Totally Fine

).
I will do a review of the film some time later (hopefully in the next week?), as I have to head back to the Festival in a little while. In short, though, Oh, My Buddha! is a delightful film that had the audience roaring with laughter throughout. The cast were superb – in addition to Watanabe, Kazunobu Mineta as the hippy Hige Godzilla (Bearded Godzilla) and Lily Franky (author of Tokyo Tower

) as Jun’s father gave brilliant performances.  The film is already on DVD in Japan (see links below).