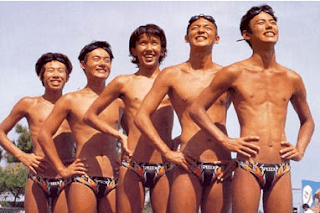 Although my viewing habits of late have taken me into the territory of more artsy fare, I do occasionally indulge in a few guilty pleasures. For example, I love a good genre film now and then, no matter how predictable the plot. Waterboys (ウォーターボーイズ, Shinobu Yaguchi, 2001) falls into the category of heartfelt screwball comedy with an Esther Williams twist. I’ll bet, dear reader, that you didn’t even know that such a category exists! The premise: it is nearing the end of the school year for a group of young students at an all male school who have failed to be successful in any clubs for sports or hobbies. A young female teacher arrives on the scene with a passion for synchronized swimming and therein lies the screwball comedy: young men performing a sport which is usually done by women.

Through a sudden and unlikely series of events in which the teacher pukes one moment and the next moment is eight months pregnant and on pregnancy leave, the boys find themselves stuck with a plan to perform at the school summer festival but without anyone to train them. I could imagine a lot of cynical western viewers getting annoyed with the film at this point because of the unrealistic plot devices being thrown at them. However, I suspect that the average Japanese audience takes this as a cue to not take anything seriously and to just sit back and laugh at the gags. The plot really is besides the point. It only acts as a build up for the swimming spectacular (more a choreographed routine using a swimming pool than the actual sport of synchro) which is the centerpiece of the film.

Waterboys is successful because it never takes itself too seriously. The underlying plot device could be described as a kind of ‘if you don’t succeed, try, try again’ story, but the film only expects laughs and not tears from its audience. It’s not really about winning but about going through the process of improving oneself. And of course, although there are individual stories of triumph in the plot, as this is a Japanese film succeeding as a group is what is most important. Or, as Naoto Takenaka in the role of Sea World boss Isomura-san tells Suzuki-san (Satoshi Tsumabuki): getting out there, having fun, and making a fool of yourself is much better than feeling worthless for the rest of your life.

The film is also successful because it doesn’t overdo offensive stereotypes that sometimes creep into Japanese comedies. The jokes surrounding the transvestites who fund the boys in their efforts to learn synchro are relatively tame and the uncomfortable tension surrounding the one gay character Saotome (Takatoshi Kaneko) who has a crush on one of his teammates (Sato, played by Hiroshi Tamaki) is normalized rather than mocked. The big laughs in the film come from seeing geeky guys performing amusing routines – such as when Ohta (Akifumi Miura) gets discovered doing a workout video in tight red briefs. The director even managed to reign in the performance of Naoto Takenaka as Isomura the dolphin instructor. Takenaka is known for his over-the-top characters in films like Shall We Dance? (hilarious!) and Nodame Cantabile (a dreadful performance!). My favourite cameo of his was in Twentieth Century Boys where he gets killed off moments after making his appearance (I do have a black sense of humour).

Waterboys was so successful that there was a follow-up TV series on Fuji TV (2003-4) which ran for two seasons and a sequel Waterboys 2 (Yuji Sato, 2004). It’s a fun film for the young, yet perhaps surprisingly there may actually be some food for thought for the more academically inclined. For example, I believe there may be a great academic paper in there somewhere about male bodies subverting a typically female genre film. Being a big fan of 1930s genre films, I can say without hesitation that it’s a film that would indeed make Esther Williams and Busby Berkeley proud of their legacy. Available on DVD and Blu-ray with English subtitles. 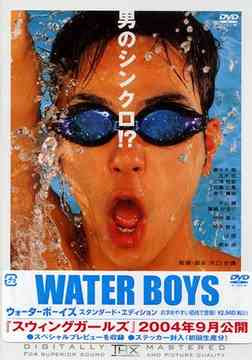