Nagisa Oshima’s 1968 film Death By Hanging (Koushike/絞死刑) belongs to a very small category of films that deal with the issue of state execution. In the States, it took the vision of Tim Robbins and the acting mettle of Susan Sarandon and Sean Penn to pull it off in Dead Man Walking (1995). While Dead Man Walking delves deep into the spiritual aspects of forgiveness and redemption and the ethicality of state execution, it steers clear from bluntly equating execution with murder.

For that, one can turn to Krzystof Kieslowski’s fifth Dekalog film A Short Film About Killing (1988), which won him the Jury Prize at Cannes. Kieslowski’s film lays bare the practice of capital punishment coldly and clinically with Jacek’s execution shown to be as ruthless and brutal and his murder of the cab driver. Like Kieslowski, in Death By Hanging Oshima uses techniques of distanciation to force the spectator to think critically about the morality and ethicality of the practice of execution. Although both films have universal appeal, they also nonetheless address issues very specific to the time and place in which they were made.

Death By Hanging begins in a documentary style, telling the audience that 71% of Japanese citizens support the death penalty, but then the title cards address this majority directly asking if those in support of the death penalty have ever witnessed an execution. The prison house where the executions take place is introduced documentary style with a voice-of-god narration (done by Oshima himself) that leads us through the ceremony up until the point at which the doctor announces that the death by hanging has been unsuccessful and the prisoner’s body seems to be refusing to die. From here, the film diverges sharply from documentary into a kind of parallel universe which Oshima uses to explore the complex issues surrounding capital punishment in Japan. The prisoner’s soul has departed, according to the Catholic priest attending the ceremony, but his body has not and the prison staff engage in elaborate proceedings in order to revive the consciousness of their prisoner so that they can re-hang him. 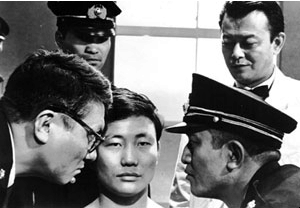 Like the proverbial onion, the film peels off the many layers of complex issues surrounding the hanging of the central character known as ‘R’ during the proceedings. And like Jacek in Kieslowski’s film, R comes from a disadvantaged background. Yet poverty, a disabled mother, and an alcoholic father are less of a hindrance to R than growing up as a second generation Korean in Japan. The prejudices of his jailors are revealed as they attempt to jog R’s memory about his childhood. In addition to the weight of past Japanese crimes against the Korean nation, the film dwells upon the differing views about death in different religions (Catholicism vs. Buddhist/Shinto), women as objects (or victims) of male desire, and the failings of bureaucracy.

One of the most fascinating elements of the film is the implication that the men in charge of administering or witnessing R’s death by hanging may have also been witnesses to or active participants in war crimes in Asia during the second world war. Death By Hanging should really be screened together with Oshima’s later film Merry Christmas, Mr. Lawrence (Senjou no Merii Kurisumasu/戦場のメリークリスマス, 1983) which also addresses Japanese war crimes including the mistreatment of Koreans. It’s well-worth viewing for the performances of David Bowie, Ryuichi Sakamoto, Tom Conti, and Jack Thompson (loved him in Breaker Morant!) not to mention Beat Takeshi in his debut feature film role.

As in most of Oshima’s films, the story of Death By Hanging is inspired by the real crimes of an individual. Ri Chin’u was an ethnic Korean who confessed to the killing of two Japanese school girls in the late 1950s and even went on to write about out his crimes. Oshima took this glimpse into the psychological workings of a murderer and transformed it into a masterwork that explores issues of guilt and consciousness and questions not only the ethicality of state execution but also the veracity of human memory in acting as a witness.

With the appointment of Keiko Chiba to the position of justice minister earlier this year, capital punishment in Japan has become an issue again due to her abolitionist stance. Whether or not she will try to end the practice in the face of continuing popular support for the practice remains to be seen. It would be great to see someone from the current generation of filmmakers tackle the issue head-on as Oshima did in the 60s addressing today’s issues. Hajime Kadoi’s film Vacation (Kyuka, 2007) used the issue as a background to a drama, but as Chris MaGee noted in his TIFF’08 review, it did not politicize the issue of capital punishment. There is ample material for a brave young filmmaker to follow Oshima’s example and make a film that addresses today’s Japan and the issue of state execution.

It is also time for Criterion to tackle Oshima’s oeuvre just like they did with Ozu and Kurosawa. Or perhaps it is on the list of future plans for Yume Pictures in the UK who have been putting a lot of great films of the New Wave generation on DVD. In Japan, Death By Hanging is available on a 2008 boxset together with The Catch (飼育/Shiiku, 1961) and Tales of the Ninja (忍者武芸帳/ Ninja bugē-chō, 1967) but with no subtitles. 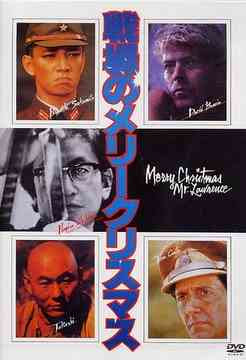