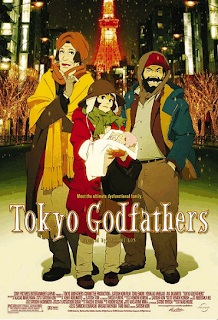 If you are looking for a good Christmas movie to watch during the holiday season but without the saccharine schmaltz that usually goes hand-in-hand with such films, then look no further than Kon Satoshi’s 2003 animated feature film Tokyo Godfathers (東京ゴッドファーザーズ). Be warned, however, that although this film is animated it is not a family Christmas film. . . unless your kids are mature enough to deal with issues of child abandonment, homelessness, acts of terrorism, and transvestite hostess bars.

The film opens with an idyllic image of a baby in a manger and a child in the role of one of the three wise men reciting lines from the nativity play. A choir then breaks out into Kiyoshi kono Yoru (きよしこの夜, the Japanese version of Silent Night), followed by a preacher giving a Christmas sermon. The audience is filled with homeless people who have come for the promised free dinner at the end of the service. Among the homeless in the audience are two of the three title characters of the film: Gin, a middle-aged alcoholic who is very cynical about the sermon, and Hana, an okama (transvestite gay man) who enjoys the elevated rhetoric. After visiting the soup kitchen, the two meet up with the third member of this unlikely trio: Miyuki. Miyuki-chan is runaway teen who is introduced spitting on strangers from the rooftop of a tall building. Together the three have formed a kind of surrogate family for themselves with Hana taking on a kind of motherly role.

While bickering in their garbage-filled adopted home they discover an abandoned baby girl. In honour of Christmas Eve, they name the baby Kiyoko which means “pure child”. After some debate about what to do, they decide to put off notifying the police in order to first try tracking down Kiyoko’s mother themselves. For each of the three this marks the beginning of personal journeys that will in the course of the film reveal the complex, painful stories of how they each ended up homeless.

To audiences today, the title of this film immediately conjures up images of Francis Ford Coppola`s Godfather films. However, while the yakuza do make a brief appearance in the film, Satoshi Kon (今敏, b. 1963: Perfect Blue, Paprika) and screenwriter Keiko Nobumoto (信本敬子, b. 1964: Wolf’s Rain, Cowboy Bebop) actually found their inspiration elsewhere. The title refers to one of John Ford’s lesser known Westerns 3 Godfathers (1948) starring John Wayne, Harry Carey, Jr., and Pedro Armedáriz. The story itself has an even older provenance as a bestselling novel in 1913 by Peter B. Keyne. Before the John Wayne adaptation, the story had already been adapted five times, of which two films are considered lost. Two of the films starred Harry Carey, Jr.’s father, the legendary character actor Harry Carey (1878-1947), one of which was also directed by John Ford.

The original story told the tale of three bank robbers who become the unlikely godfathers of a newborn child at the mother’s deathbed. Kon and Nobumoto likely drew their inspiration from the 1946 John Ford adaptation. John Ford’s films have been highly influential on the style and aesthetic of many Japanese directors, most notably Akira Kurosawa. Tokyo Godfathers does not use the aesthetic of John Ford (claustrophobic Tokyo instead of wide open landscapes), but it does address some of the core themes of a Ford film: human dignity, ethical imperative and psychologically complex central characters. The film is also structured much like a Ford film with dualities of meaning throughout the text.

In essence, Kon and Nobumoto have taken an American story and transformed it into a modern Japanese story concerning the issue of child abandonment. This issue has been covered in the Japanese media for at least 30 years, with Ryu Murakami tackling the subject in his deeply troubling novel Coin Locker Babies (1980 – rumoured to be in development as a film by Michele Civetta). The problem was even recently addressed by Jikei hospital in Kumamoto who adopted a baby drop off based on European models because of the numbers of babies being abandoned in supermarkets and parks. Sometimes, such troubling stories are difficult to address in a live action feature film. If such controversial topics are developed into features, they are usually low budget because it is hard to attract an audience for such hard-hitting fare. Animation allows for such complex issues to be addressed in a way that it accessible to a wide audience.

For me, Tokyo Godfathers joins an elite group of films that use animation to tell stories that may be too painful to realize successfully in live action. Other films in this category would include Takahata’s Grave of the Fireflies (1988, children suffering in times of war), Miyazaki’s My Neighbour Totoro (1998, children’s fantasy used as a way to negotiate the fear of a mother’s death), Kinoshita’s Pica-don (1978, a depiction of the morning the atomic bomb destroyed Hiroshima), Masaki Mori’s Barefoot Gen (1983, also depicts Hiroshima). The genius of Tokyo Godfathers is that despite the bleak subject matter, Kon was able to inject enough humour and benevolence into the film so that the audience leaves the film with a sense of the redeeming features of humanity.