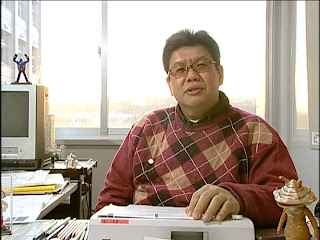 Last month the Japanese animation community was shocked by the passing of Professor Masahiro Katayama at the age of 56. Katayama was an animator, manga-ka, illustrator, administrator, mentor, and professor at Tama Art University.
As a child, Katayama’s love for animation was formed by the work of Walt Disney and other popular American animation that he saw on television. When he later encountered the works of Osamu Tezuka, it was to have a deep impact on his creative career. From about the age of twenty, Katayama began working as a cartoonist and illustrator for newspapers. He was a member of Japan’s Cartoonist Association from 1978 to 1990. 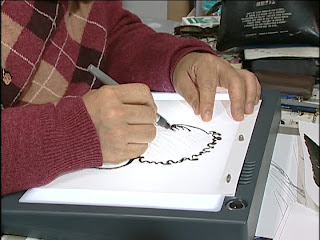 His activity in animation was quite varied from assisting on productions to organizing events and exhibitions. He directed a documentary film about the career of Osamu Tezuka called Film is Alive: A Filmography of Osamu Tezuka, 1962-1989 (1990) and has collaborated on a number of books about animators for Anido.
Among Katayama’s greatest accomplishments was his supervision of the New Animation Animation DVD series for Geneon Universal. This invaluable series includes the works not only of key Japanese art animation figures such as Kihachiro Kawamoto, Tadanari Okamoto, Yoji Kuri, Osamu Tezuka and Koji Yamamura, but also some fine DVD collections of world animation figures including Yuri Norstein, Norman McLaren, Jiří Trnka, Frédéric Back, and Aleksandr Petrov. These DVDs and boxsets are all accompanied by informative essays about the animators written by Katayama himself. 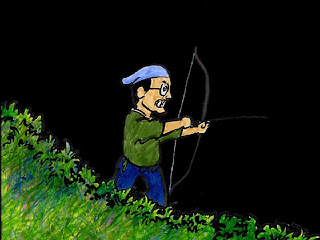 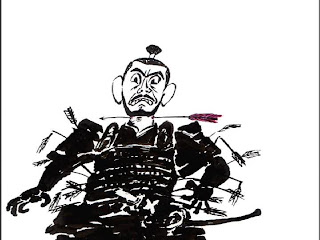 As I mentioned in my recent article on independent animation for Midnight Eye, as a professor at Tama Art University, Masahiro Katayama made a deep impact on his students. When I spoke with Akino Kondoh at the Shinsedai Festival in Toronto last year, she told me that Katayama had been the one to introduce her to the world of international art animation. Other top animators who have cited Katayama’s influence include  co-founder of CALF Mirai Mizue, and Kunio Kato who won the Annecy Cristal, the Hiroshima Prize and an Oscar for his animated short La maison en petits cubes (2008).
Masahiro Katayama had a close relationship with Kihachiro Kawamoto, who passed away last year. He collaborated with Kawamoto on a number of projects including illustrating the cover of his book Puppets for The Romance of the Three Kingdoms (Anido, 1984), doing the claymation for Kihachiro Kawamoto’s Self Portrait (1988), and assisting with the production of The Book of the Dead (2005) which was shot at Tama Art University. 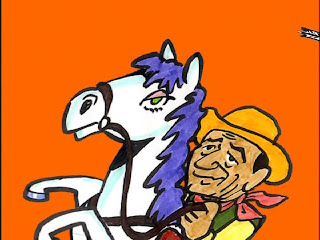 I first encountered Katayama's work as an artist on Winter Days (2003), the collaborative renku poem adaptation which he co-produced with Kawamoto. Katayama took a humorous approach to his animated contribution which is an adaptation of a section of the renku poem written by Kakei. He takes the metaphorical arrow of the original renku and renders it in a literal fashion, which of course leads to comedy. 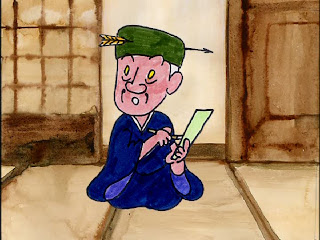 In Katayama’s vignette, a hidden marksman takes aim at a man being carried on a kago (palanquin/litter). The man’s aim is affected by some reflected light and his arrow shoots over the heads of an array of popular figures from folk legend (William Tell’s son with the apple on his head;  Japanese folktales) and the movies (Toshiro Mifune, John Wayne) before landing in the hat of the poet writting the verse.
. 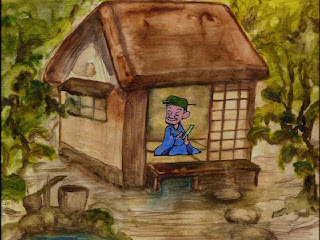 Masahiro Katayama’s funeral was held on March 12th, on the day after the great Tohoku earthquake and tsunami. Photographs of the packed service can be viewed at Anido.