Kenzō Masaoka (政岡 憲三, 1898-1988) is considered one of Japan’s leading animation pioneers. Born into a wealthy Osaka family, Masaoka studied Japanese and Western art in Kyoto before landing his first job with a major film studio Makino Productions (マキノ映画製作所, active in the 1920s & 1930s). He started out as a kind of jack-of-all-trades working as an actor, assistant director to Shōzō Makino (マキノ省三, 1878-1929, the founder of Makino Pro), and a set designer for Teinosuke Kinugasa (衣笠 貞之助, 1896-1982), among other things until settling into the direction of his own animated films. He is credited with the direction of the first sound animation in Japan, and with coining the term “dōga” (動画/animated images).

Of Masaoka’s many films, The Spider and the Tulip (くもとちゅうりっぷ/Kumo to Churippu, 1943) stands out as a real gem. Based on a story by Michiko Yokoyama, it tells the tale of a spider who tries to trap a young ladybug (tentoumushi JP / ladybird UK). The ladybug isn’t fooled by his cunning ploys, but has trouble trying to escape his clutches and is aided by a tulip with the face of a young girl.

As Daniel Kothenschulte points out in Ga-Netchū!, the animation is thematically similar to two of Disney’s Silly Symphonies: The Moth and the Flame (1938) and The Old Mill (1937). It is a well-known fact that early Japanese animation was heavily influenced by the Disney style, which was dominant internationally in the 1930s. The strongest legacy of Disney on anime, in my opinion, was the adoption of ‘Bambi eyes’ for human figures – a legacy that continues to this day.

Stylistically in Spider and Tulip the ‘good’ ladybug is contrasted with the ‘bad’ spider through both appearance and song. The ladybug has a kawaii, cherub face common in manga and storybooks of the 1930s. Her character movement is graceful and her song is sweet and cheerful. In contrast, the spider is an amalgam of two unfortunate black stereotypes: the minstrel show and Little Black Sambo. The spider sings in a deep voice, à la “Ol’ Man River” in the musical Showboat (1927), and his face has clearly been influenced by American and British caricatures of Africans such as Little Black Sambo. This is a sour note in an otherwise beautiful animation, but should be kept in the context of the times. Arguably, Masaoka is just copying a character type imported from overseas – in terms of offensive and disturbing imagery in animation, Japanese animation of this period pales next to the sophisticated wartime propaganda of Disney and Warner Brothers (see my entry on Ducktators).

The influence of American movies can also be found in Spider and Tulip in inoffensive touches such as the spider fashioning a lasso out of his string in order to rescue himself during the storm sequence. Western movies, especially those of John Ford, were wildly popular in Japan in the 1930s and influenced many filmmakers – the most famous devotee being Akira Kurosawa.

Spider and Tulip is not only an historically important film for gauging the influence of American animation and movies on early anime, but it also demonstrates how sophisticated Kenzō Masaoka’s technique had become by the latter part of his career (he had to retire in 1949 due to problems with his eyesight). The animation of the little ladybug is absolutely exquisite. Rain is never an easy thing to animate convincingly and Masaoka does it masterfully. Each frame of the film has been carefully considered. Perhaps the most beautiful touches are the short sequence of rain falling on water during the storm as well as the final image of a spider web shining in the sunshine of a tree. 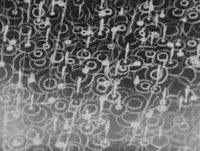 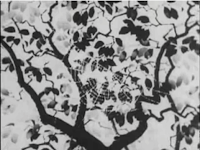 Long before seeing this film myself, I once read a review of it that claimed that for a wartime movie it was ‘delightfully free of the wartime experience’, or words to that effect. I think that reviewer was deceived by the idyllic beauty of the animation. The naïve Japanese child (tentoumushi) singing joyfully must avoid being snared by the African American (kumo) who tries to trick her. The propaganda is subtle but there. A fascinating film which is all sweetness and light on the surface but with hidden depths of meaning.

This film is included on anido’s DVD of Kenzō Masaoka’s complete works. It is also available on the Digital Meme boxset of early anime and the US release Roots of Japanese Anime.