Kato Kunio’s Oscar win this year for La maison en petits cubes (Tsumiki no ie, 2008) has sparked the interest of many anime fans in alternatives to mainstream Japanese animation. My review of his film last November is one of the most often read posts on this blog. If you have fallen under the spell of Kato Kunio’s green-blue colour palette, here are 15 other must see innovative animations from Japan that I highly recommend (with links to where you can find them).

This animation was inspired by an early animation device that was a precursor of the zoetrope. It consisted of a spinning disc with the various stages of the animation painted in a circle like the numbers on a clock. When the disc was spun using a handle, the viewer would peer through a hole and see the resulting short animation. Popular subjects were human figures engaged in various activities like dancing or playing leap frog. Furukawa pays tribute to this early animation device while at the same time using the concept to create more abstract images. This film won Furukawa the special jury prize at Annecy – the second Japanese to do so after Yoji Kuri in 1962 with Ningen Doubutsuen. Available via anido.

This film actually ties with Atama Yama (2003) as my favourite Yamamura films. Read my reviews of these films here and here. Available to purchase here (no subtitles).

Kuri’s best known for his humorous line-drawing animations with their experimental soundtracks, but this early experimental film wins my heart for its ingenuity. Read my view here. Order it here. 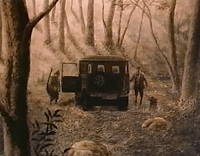 4. Tadanari Okamoto’s The Restaurant of Many Orders (Chuumon no Ooi Ryooriten, 1991)

This was Okamoto’s final film and was completed by his friend and colleague Kawamoto The look was heavily influenced by the participation of Reiko Okuyama in my opinion, and it has been very influential on the younger generation of animators -- particularly Yamamura’s recent dark, psychological tales Atama Yama and Kafuka Inaka Isha. Available on DVD or DVD Boxset.

All of Kawamoto’s puppet films are of an incredibly high standard of doll-making craft and storytelling skills. It is hard to choose just one to recommend. Dojoji Temple is perhaps the most quintessential Kawamoto film: a traditional story told in the bunraku tradition with lovingly crafted puppets and accomplished voice acting. Available with English subtitles, or from Geneon without. 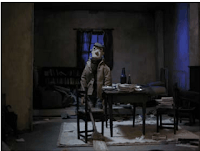 Murata’s films range from screwball comedy (Sakadachikun) to the ethereally beautiful (Fuyu no Niji, 2005). He has mastered the art of a wide range of animation styles, but for me he is at his best doing puppet animaton. The My Road puppet animations tackle very difficult themes. I love them all, but I identify the most with Indigo Road. Can be ordered via Murata’s website.

Kosemura is an installation artist who specializes in ‘moving paintings.’ Her animations are usually displayed in galleries (though you can see some online here) in traditional Japanese settings. This is my favourite work of hers. The animation screened on a traditional kyōdai – a Japanese dresser with a low table for sitting on the floor and doing make-up with a tall full-length mirror on top. The ‘screen’ was the mirror. As the viewer watches, they hear the rustling of a kimono and catch glimpses of a female figure in her kimono. This piece is so fascinating and suggestive that I recall sitting in the Yokohama Museum of Art and watching it for at least 20 minutes even though it was only on a 8 minute loop. 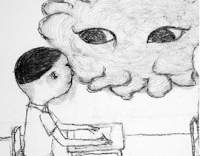 Tsuji has dabbled in puppet and line-drawing animation, but for me his most successful works have been his charcoal animations, inspired in part by the works of William Kentridge. A Trilogy About Clouds is a truly mesmerizing viewing experience. The films are made in a similar way to early chalkboard animations in that the artist draws an image, photographs it, then erases (or smudges in the case of charcoal) and draws the next frame. With charcoal, this means that an ‘after image’ is left of the previous frames, reminding the viewer of what has gone before. Tsuji does not storyboard before making his films, which give them a kind of stream-of-consciousness logic. Order his DVD here.

'Tezuka? Isn’t he mainstream?' I hear you ask. Tezuka was actually an innovator in the truest sense and participated in the early animation festivals of the 1960s and early 1970s at Sogetsu Hall. Some of his truly remarkable ‘experimental’ films include his interpretation of Mussorgy’s Pictures at an Exhibition (1966). Jumping is a remarkable short film shot from the point of view of a girl jumping down the street. The jumps get bigger and bigger, first over a car, them into a garden and over houses, and then into the most unlikely of places. What makes this film so amazing is that it was entirely done the old-school way with approximately 4,000 hand-drawn images. Such effects today have become commonplace thanks to computer animation, but this film still wows after 25 years. Available from Geneon (no subtitles) or this company in Oz (with English subtitles).

Yonesho’s art is in the abstract tradition pioneered by artists like Oskar Fischinger and Norman McLaren. Yonesho takes abstract painted animation one step further by adding stop motion objects (books) into the mix. Her painted designs jump from book to book, with each book representing a door into a different aspect of human nature. Yonesho’s meticulous use of three dimension space is particularly striking. Her films are available via anido.

As much as I love Ishida’s more recent installation animation projects like Wall of the Sea (2007), this early low-budget work drawn on the walls of his student dorm room over the course of a year. The varying quality of light through the window creates a beautiful , haunting effect when combined with the flowing lines and geometric patterns shifting form on the wall. Available on Thinking and Drawing.

Over the past 10 years, Tanaami and Aihara, who are both professors at the Kyoto Univerisity of Art and Design, have collaborated on a number of animated shorts. Some of these are known as ‘animation battles’ and others as ‘animation correspondence.’ In both cases, the artists take turns at the ‘canvas.’ Scrap Diary to me is the quintessential example of such an animation correspondence. Tanaami’s trademark goldfish-inspired figures and figures with oversized features are counterbalanced by Aihara’s full-screen, highly detailed, kaleidoscope-like designs. Tanaami and Aihara still work the old-fashioned way by hand on animation paper that they photograph on 16mm. With sound design by their frequent collaborator Takashi Inagaki. DVD available here.

The animated installations created by Tabaimo are probably best viewed within a gallery space, but as we are not all so lucky as to be able to attend one of her exhibitions, the next best thing are her Ufer! documentaries. Anyone who has used a public restroom in an older train station or subway station in Japan will be able to relate to the setting of this piece, which Tabaimo layers with levels of symbolic meaning. The installation can be seen on imo-la and the film version on the Tokyo Loop DVD.

Seike’s films have a unique look created by scanning real objects (such as leaves in this film) and colouring and animating them on the computer. Her films are highly symbolic poetic films that require several screenings in order unravel all the layers of meaning. I discover a new aspect each time I watch this film. Can be seen on Tokyo Loop. For more of her films check out Thinking and Drawing. 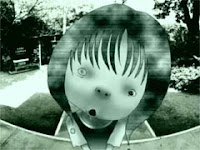 This little ghost story was one of my favourite films on Thinking and Drawing. I love the use of black and white photographs and fish eye lens. Iki hasn’t updated his blog since 2007 and I haven’t heard of any new films being on the animation festival circuit. I do hope he hasn’t given up on art animation, because Kaidan demonstrates that he has a lot of creative potential.