Nodame Cantabile (のだめカンタービレ) is a popular, award-winning shōjo manga by Tomoko Ninomiya (二ノ宮知子). The series debuted in Kiss magazine in 2001 and the story is on-going with 19 volumes currently in print.

The manga’s popularity has only increased in recent years with Fuji TV producing both a live action drama series and an anime based on the story. The drama ran from October 16 to December 25, 2006 and was revived for a two-episode special set in Europe in January 2008. The animation ran from January 11-June 28, 2007. Nodame Cantabile gets its name through a combination of the nickname of the main character and the musical theme of the story. Nodame, whose full name is Megumi Noda, is an eccentric young student at a music college in Tokyo. She majors in piano and dreams of one day becoming a kindergarten teacher. At every turn, she defies society’s expectations for young women: she gets so caught up in her music and her love of a quirky tv animation that she neglects her apartment and her physical appearance. Her room is filled with clutter and decaying remains of meals, and she has been known to go for days without washing her hair. In Japan, where bathing is an important social ritual both at home and in pubic baths, Nodame’s behaviour seems extraordinary.

The second half of the title, cantabile, is a musical term meaning singable or song-like. This refers not only to the musical theme of the story, but also to Nodame’s unconventional style of piano playing. She finds it difficult to sight-read, and picks up most pieces just by listening to them once. Playing the piano is an emotional experience for Nodame, and she has a tendency to get so wrapped up in the experience that she forgets the composer’s intentions and plays purely for her own enjoyment.

As with most manga, Nodame Cantabile, balances a number different plots and sub-plots, but the central storyline that brings readers back for each new episode is the unlikely romance between Nodame and her fellow student and next door neighbour Shinichi Chiaki. Whereas Nodame comes from a modest working class background in southern Japan, Chiaki was raised in a wealthy family with a professional musician for a father. As a child, he was introduced to the musical capitals of Europe and aspires to become a conductor like his idol, Sebastino Viera.

Nodame and Chiaki’s relationship begins as an unusual friendship. Although Chiaki thinks that Nodame is a nuisance, he somehow can’t help but want to look after her. He nurtures Nodame’s unique talent for piano and, discovering how inept Nodame is at looking after herself, Chiaki finds himself cleaning up her apartment and cooking meals for her. Nodame falls head over heels for Chiaki from the outset, and does nothing to hide her affection. She comes to depend on his friendship and guidance, and dreams both of his future success as a conductor and of one day becoming his wife.

Both the anime and the drama are engaging. What I like best about the story, is that it turns the conventional gender roles on their head. All the characters, no matter what their sex, have set high career goals for themselves, and the romance is incidental to those goals. Nodame’s complete ineptitude as a cook and as a housekeeper makes for some great comedic moments, and allows the male lead to demonstrate his domestic talents. If I have any critique of the two main characters, it would be that I would wish Nodame to be a little less needy, and Chiaki to be more compassionate with others.

I have a high tolerance for cheery melodrama and slapstick comedy (I am a huge fan of Buster Keaton), but no matter how much I loved the unconventional romance and character development of Chiaki and Nodame, my enjoyment of both the anime and the drama was marred by the extreme slapstick and the terrible stereotyping of gays and foreigners.

By extreme slapstick, I mean violence. Having characters engage in moments of extreme rage or violence for comic effect is a trope of manga and anime. In most cases, such as in Nodame Cantabile, it is meant as a visual representation of inner turmoil, not as an actual display of real violence. When Nodame gets upset, her violent outbursts are usually accompanied by a comical shout of ‘gyabo!’ In the anime, these outbursts are tolerable, but in the drama I don’t find the slapstick fights between Nodame and Chiaki very amusing. There is a big problem with unreported domestic violence in Japan, and I don’t think that it is something to joke about.

Slapstick violence does has a long tradition in Japanese drama. The harisen (paper fan) that Nodame’s piano instructor, Etou-sensei uses as a form of discipline comes out of this physical comedy tradition. However, the thin border between comedy and tragedy is ruptured in Nodame Cantabile when it is revealed that Nodame’s fear of the harisen stems from a brutal punishment she received from a piano teacher when she was a child. For me, this just emphasized the inappropriateness of the physical comedy. It is possible to have slapstick comedy without it involving real physical violence. 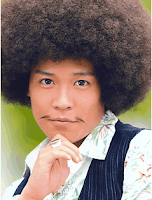 I also did not enjoy the gay stereotyping of percussionist Okuyama Masumi. While I do like the idea of both men and women having crushes on Chiaki, the rivalry between Masumi-chan and Nodame could have been handled in a more adept way. Masumi-chan’s stereotyping as an over-the-top, afro-headed, hysterical gay character does nothing to aid the cause of gay men in Japan. While a certain kind of feminized man is considered attractive in Japan, openly gay men and women are decades behind North American and European gays and lesbians in terms of acceptance in society.

The third thing that made me uncomfortable about Nodame Cantabile was the portrayal of conductor Franz von Stresemann. Stresemann falls into the disturbing trend of having hentai (perverted) characters for comical effect in manga and anime. Perhaps the most popular such character is Jiraiya in Naruto, whom Naruto refers to has ero-sennin (the perverted hermit). In the Nodame Cantabile anime, it is bad enough that the pervert is not only the only foreign character, but also tolerated because of his status as sensei. In terms of the story, this is done, I suppose, to contrast with Chiaki’s more pure character, but it is truly disturbing to have a male character in a position of power whose perversions are excused rather than punished.

In the live-action drama, the absurdity of the Stresemann character is increased by having a Japanese comedian play the role. Naoto Takenake dons a ridiculous prosthetic nose and long-haired white wig and plays the role with an over-the-top accent that sounds more Yankee than German. If it weren’t for the great chemistry between Juri Ueno as Nodame and Tamaki Hiroshi as Chiaki, the whole series would have been in danger of slipping entirely into the realm of farce. I don’t understand the casting of Takenake as Streseman, as they certainly were able to find foreigners who could speak Japanese for the European special that showed in January of this year. Perhaps they could not find a European actor willing to play a pervert who lusts after Japanese girls half his age. I’m not saying that Western perverts in Japan don’t exist, on the contrary they’re a real problem and it’s not comedy material.

I felt that it was important to highlight some of the reservations that I had about Nodame Cantabile to counterbalance the glowing fan sites out there on the web. The anime and the live-action drama are certainly important to watch. While I may object to the violence and stereotypes, it is important to recognize these trends in Japanese manga and anime and what they say about contemporary Japanese culture and society. To end on a positive note, Nodame Cantabile has done much to make classical musical cool for a young generation of women, and the romantic conclusion of the live-action drama is perhaps the best love scene of 2006.