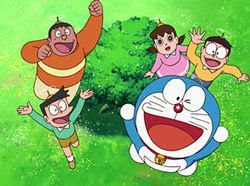 It was announced this week that Japan's foreign minister, Masahiko Komura, had appointed Doraemon as Japan's first ever "animation ambassador" in its drive to increase the popularity of Japanese pop culture overseas. Like Snoopy in the United States, Doraemon is a beloved cartoon character whose annual film outings are a much anticipated event by many Japanese families. Although he is little known in the English speaking world, Doraemon is well-known throughout Asian countries.

Perhaps Doraemon, a helpful time-travelling cat from the 22nd century with a pocket full of gadgets, could pull out a gadget that would allow for Japanese anime to be subtitled and distributed over the internet in a more efficient manner. I find it bewildering that Japanese production companies and manga publishers have not yet managed to harness the keen enthusiasm of fans of Japanese pop culture overseas. Not only does it take sometimes well over a year for popular series to be distributed outside of Japan, but there are tons of older series that would be received with open arms if it were made available in European languages.

Take the popular manga and anime series Nana, for instance. The manga is only up to book 9 in the States (fortunately, for me here in Germany they are up to book 17 of 18 volumes so I am not too far behind where I left off reading in Tokyo last spring) and the anime has not been dubbed or subtitled at all. Judging from the intense interest on discussion boards on the internet and the popularity of the fansubs of the anime, Nippon Television could make a tidy profit from distributing the series with subtitles via download on the internet. Even more surprising, is that many of manga-ka Ai Yazawa's equally popular older titles are not available in English either. The 50 episode anime of Gokinjo Monogatari would surely find fans if it were distributed with subtitles or dubs, with 7 books of manga as tie-in. It seems so strange to me that there are so many great manga and anime series out there with fans desperate to get their hands on the material, and a bunch of rookie subtitlers are reaping all the profits online for material they didn't even create. How is it that a group of unpaid fans are able to distribute such material more quickly than Japanese production companies. I partly know the answer to this, but I won't go into a rant on the short-sightedness of Japanese corporate culture here. I suspect that the biggest reason is ignorance. In Japan, the focus is always on the new, so perhaps they don't realise that their foreign market might enjoy their old anime and manga just as much as the newer stuff. Fans are collectors, and they will lap up anything that is made available to them.

I don't think that the Japanese government should focus their energies on generated interest in Japanese culture abroad. They should invest in translators and subtitlers in order to make the wealth of literature and visual culture more readily available for distribution over the internet. I'm sure that fans would be happy to pay a monthly fee to have access to professionally subtitled versions of their favourite anime through legitimate means, instead of downloading grammatically challenged content through illicit means.
Source on the Doraemon news: The Guardian