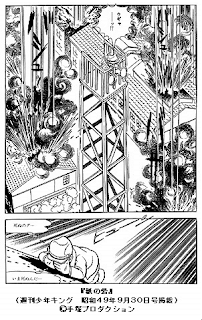 The Showa-kan, a Tokyo museum dedicated to wartime and post-war Occupation Japan, is currently running a free-of-charge special exhibition on the experiences of Osamu Tezuka (手塚治虫). Through photographs, archival objects, and original drawings by Tezuka, the exhibit demonstrates the impact that the war had on the budding artist. The most powerful displays are the ones that put documentary photographs of the war next to wartime scenes from Tezuka's manga. The war forced young Tezuka (born in 1928) to grow up very quickly. The horrors that he witnessed (the firebombing of Osaka) and the hardships that he endured (wartime labour in a munitions factory) left their mark in his later work. Tezuka's manga and anime often feature a hero - his most famous is Astro Boy (鉄腕アトム) - fighting for peace and justice against a violent, totalitarian force.

The exhibition is entirely in Japanese, but most of the materials are visual and many of them speak for themselves. Fans of Tezuka will have an opporunity to examine original drawings up close as well as get a look at original cover art for Tezuka's manga such as Shin Takarajima, Lost World, Metropolis, and many more. The museum can be found at Kudanshita Station (on the Tozai, Toei Shinjuku, or Hanzomon lines).