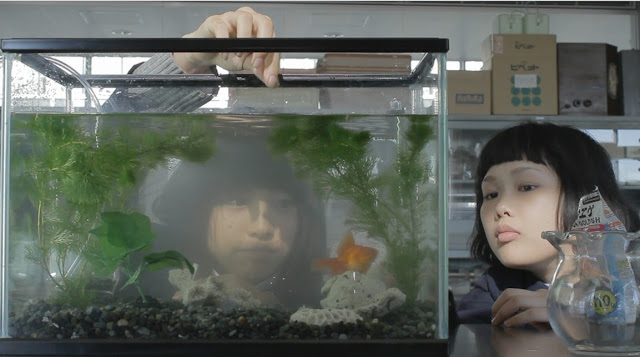 Ryohei Watanabe (b. 1987) made a splash at last year’s Pia Film Festival with his debut feature film Shady (かしこい狗は、吠えずに笑う/Kashikoi inu wa hoezu ni warau, 2012) where he won the Entertainment Award and the Cinema Fan Award.  Since then, his film has shown at international festivals including Nippon Connection 13 and the Nara International Film Festival.  Yoshito Seino has listed Watanabe as one of 7 Japanese Indie filmmakers to check out at the upcoming Raindance (25th Sept. – 6th Oct. 2013) in the UK.

On the surface Shady appears to be a teenage girl coming of age film.  Risa Kumada (mimpi*β) is an outsider at school.  Her body type and round face don’t conform to what’s currently “cool” and she finds herself on the receiving end of cruel taunts from the school bullies.  Mocking her slightly chubby appearance, the bully ringleader Marisa calls Risa “Pooh-san” in a play on words of “kuma” (bear) in her family name.

Risa has become so resigned to her fate as an outsider that she is startled by the sudden attentions of Izumi (岡村いずみ), who is one of the cutest girls in high school.  Wary at first, Risa soon falls under the spell of Izumi’s charm and before long the girls have become best friends who confide in each other and do everything together.  Before long their friendship takes on the intensity of a romance.

However, there is a growing sense of unease that develops gradually from the moment the film begins.  This unease is invoked through parallel story lines (the police search for missing classmate Aya), cinematography (strange glimpses of the past and the future shot in shades of grey with punches of colour), the soundtrack, and metaphor.  Right at the outset, a sense of entrapment is established when Risa as voice-over narrator wonders if people can sympathize with what it is like to be a dog on a leash, a fish in an aquarium, or a bird in a cage.  Watanabe and cinematographer Katstuki Tsuji continue this motif by filming Risa and Izumi in claustrophobic spaces and frames within the frame from the aquarium in the foreground to the electricity lines.

Izumi’s home also serves as a metaphor for her character: a strangely quiet place devoid of family life.  When Risa expresses surprise at how big the house is, Izumi mysteriously warns Risa that appearances can be deceiving.  Of course, Risa does not head this or any other warning (i.e. Izumi’s repeated quotation of Napoleon saying “Men are moved by two levers only— fear and self interest”) until she is too psychologically entangled with Izumi to escape.

For such a young filmmaker, Watanabe has put together a tightly edited, suspenseful film.  Although I might have gone a different route with the resolution of the film, it was a delight to see such a well executed film under 2 hours in length at Nippon Connection.  A nice contrast from the countless young directors whose films drag on because unconstrained by the cost of film stock they indulge themselves with long-winded endings.  Ryohei Watanabe is definitely a filmmaker to keep one’s eye on.

For more on Ryohei Watanabe see Guillaume Boutigny’s interview with him at Nihon Eiga  (FR) and Adam Torel’s Best of 2012 posting on Wildgrounds (EN).