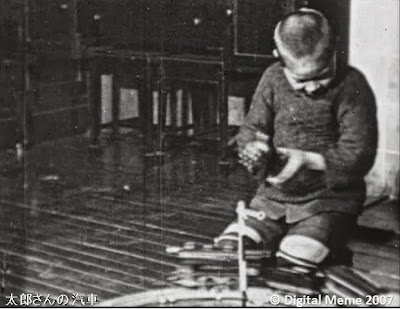 With so much of Japan’s early cinema history lost to natural disaster, war, and neglect, it is always such a delight to come across a rare film such as Taro’s Toy Train (太郎さんの汽車, 1929), that gives us a glimpse into just how sophisticated Japanese cinema was during the silent era.  Directed and written by Chuzo Aoji (青地忠三, 1885-1970) for the studio Yokohama Cinema Shokai (横浜シネマ商会), Taro’s Toy Train (also sometimes called Taro’s Steam Train in English) is a humorous 15 minute animated short with a snappy narrative and well executed animation sequences.

The opening scenes of the film are shot using live action.  Our hero, young Taro, leads a half dozen children in a game of train.  Wearing a uniform and conductor’s hat, Taro forms the engine of the train, with the children marching along behind him as if they are passengers on a train.  The edges of the train are marked out by ropes that the children hold in their hands.  After a tour through the family garden, Taro halts the train and serves his ‘passengers’ bento and tea. Even his mother, holding his young sibling, joins in the fun.

The game ends when Taro’s father arrives home from a business trip holding a large parcel in his arms.  Taro gives his friends a friendly salute to bid them farewell and greets his father.  Unwrapping the parcel, Taro is delighted to find that his father has bought him a model train set as a souvenir.  He sets out the train, complete with toy passengers and applauds enthusiastically as the electric train goes in circles on the track.  Taro’s parents allow him to stay up late, but eventually he must go to bed with his beloved new toy in its box next to him. 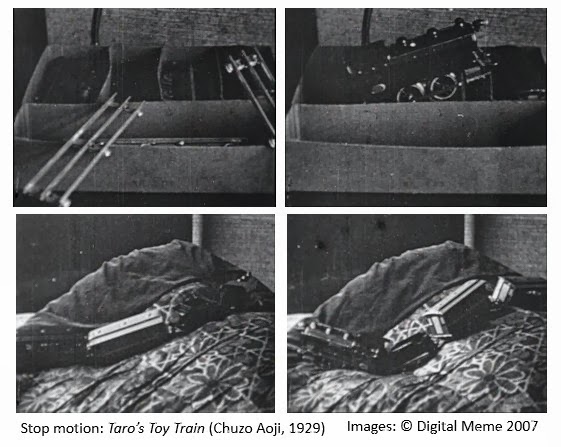 Once Taro is asleep, the train and its track comes out of its box in a stop motion animation sequence.  This is one of the earliest examples of extant stop motion animation that I have come across from Japan.  It is executed expertly, which leads me to wonder if the filmmakers made other stop motion films before this one --- as so many films have been lost it may be difficult to find out for sure.

In the stop motion sequence, the train drives all over the duvet – using animation to bring to life the lively dreams of young Taro.  The stop motion acts as a transition sequence from live action to a drawn animation sequence which takes us into Taro’s dream.  The drawn animation was done by Yasuji Murata (村田安司, 1896-1966), who is considered an early anime pioneer responsible for such films as Animal Olympic Games (1928) and The Monkey Masamune (1930).

Like much of the popular animation from the 1910s and 1920s from Gertie the Dinosaur (1914) to Walt Disney’s Oswald the Lucky Rabbit films, the dream sequence employs simple black line drawing on a minimalist background.  In fact, it may even borrow the train theme from Oswald’s famous debut in Trolley Troubles (Disney, 1927), right down to Murata’s use of anthropomorphic animals.

The first character we are introduced to in the drawn animation sequence is Taro himself in role of conductor.  This is made clear by the animated Taro saluting the “camera” in the same way as the live action Taro did when he bid his friends farewell.  Taro takes on a hero role in his dream:  the sympathetic and patient conductor who tries to sort out all the problems experienced by his passengers.  These problems occur in an amusing series of vignettes that make fun of how people can often behave rudely on trains.  We are introduced to a pig father and his sleepy brood who refuses move his satchel so an elderly goat can sit down, a pair of banana-eating hippos who throw their garbage on the floor causing a crane lady in a kimono to take a serious fall, the problems of waiting for a WC to become free on the train, and an overindulgent cow and horse who cause chaos on the line by throwing a sake bottle out the window and striking a monkey who works for the railway line. 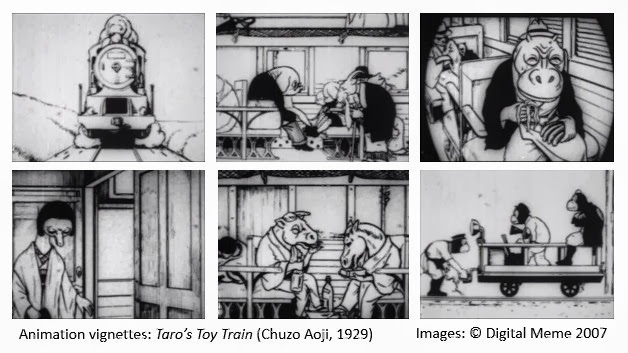 This last vignette is actually a well-known idiom come to life:  gyuuinbashoku (牛飲馬食) which literally means “drinking like a cow and eating like a horse” and is equivalent to the English idiom “to pig out”.  The comedy of these farcical vignettes have withstood the test of time quite well – mainly because the film is without the military references which can make some prewar animation uncomfortable viewing – and I can imagine an audience of both young and old laughing at the kernel of truth in the visual gags.  Like the films of Buster Keaton, the comedy is in the absurdity of everyday life.  The drawn animation sequence climaxes with a fight breaking out between the monkeys and the cow and horse with Taro vainly trying to intervene.

With a clever match-on-action, the director shifts (it looks like a dissolve, but the film is a bit broken up here so it’s hard to tell exactly how the edit was originally executed) from Taro wrestling with the animals to Taro wrestling with his blankets as he awakes from his dream.  The film ends with the boy beaming as he checks in the box to make sure his new train is still intact.

Taro’s Toy Train is an impressive film for its use of three styles – live action, stop motion, and drawn animation.  I should add that the drawn animation sequence relies heavily on cut-outs for many of its effects.  This was quite common at the time, not only to save on drawing time but because the cost of celluloid was so expensive in Japan.  It also demonstrates that Chuzo Aoji had a very good sense of how to tell a story cinematically.  Aoji and his cinematographer Yukikiyo Ueno (上野行清) change camera angles and camera distance regularly in order to keep up the visual interest and many subtle visual clues (Taro’s salute, the use of continuity editing) help keep the narrative tight and well-paced.  It’s a gem of a film that can be found on Digital Meme’s Japanese Anime Classic Collection with subtitles in English, Chinese, and Korean.  This DVD release also includes a lively music score by Joichi Yuasa.