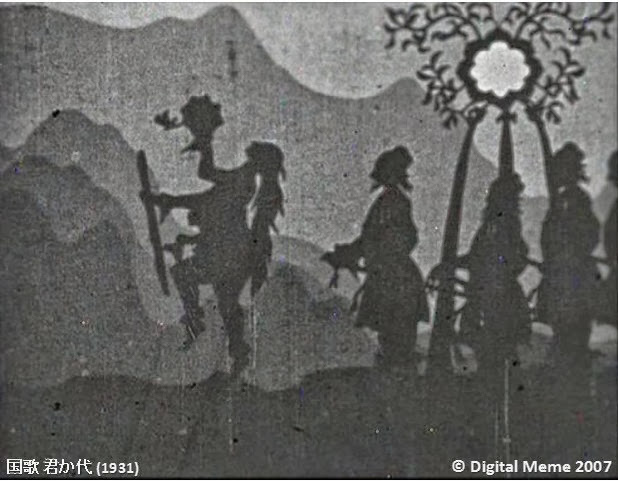 In 2010 Kinokuniya released a DVD dedicated to the works of animation pioneer Noburo Ofuji (大藤信郎, 1990-61).  At 161 minutes, this is only a selected works of this early master of chiyogami and silhouette animation.  Many more of Ofuji’s films have been preserved and the animated short The National Anthem: Kimigayo (国歌 君か代/ Kokka Kimigayo, 1931) appears on Digital Meme’s Japanese Anime Classic Collection with subtitles in English, Chinese, and Korean.  This release of the film includes a soundtrack of Kimigayo performed by Joichi Yuasa. 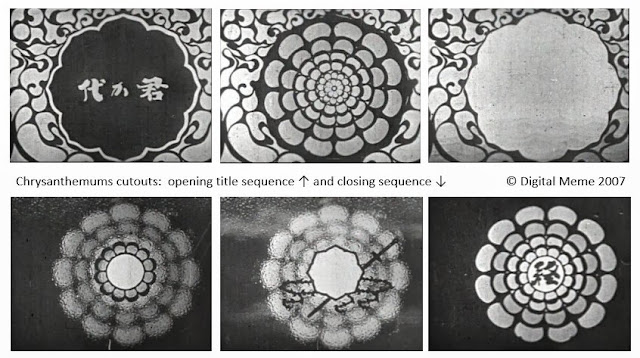 Ofuji depicts the chrysanthemum using his trademark chiyogami cutout animation style.  As he only had black and white film stock to work with in 1931, the result is not nearly as striking as his postwar films such as Whale (1952) and The Phantom Ship (1956), but his techniques are still very impressive in this film.

The chrysanthemum chiyogami sequence is followed by a mysterious silhouette animation sequence bathed in mist which depicts the famous dripping spear scene from the Japanese creation myth.  The gods Izanagi and Izanami are said to have stood on a floating bridge of heaven and stirred in the sea with a spear.  The brine that dripped from the spear formed into the first island, followed by the other islands which created the Japanese archipelago (Kuniumi). 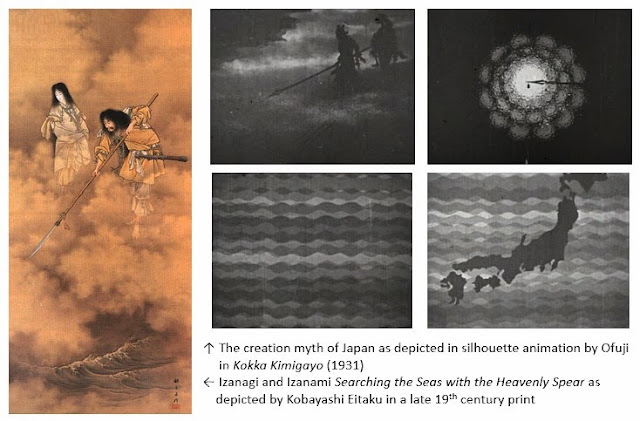 The film appears to have been designed to accompany a performance or a recording of the national anthem. This is made clear by a sequence in the middle of the film where the song`s lyrics appear on the screen character by character in traditional Japanese writing order (up→down, right→left).  At this time, Ofuji was making many animated sing-along films for children including the chiyogami record talkies The Village Festival (1930), which employs a follow-the-bouncing ball technique, and Song of Spring (1931).

After the sing-along section, Ofuji returns to symbolic national symbols and stories.  In another beautiful silhouette animation sequence he depicts part of the legend of the sun goddess Amaterasu who, after a deadly attack on her property and attendants by her brother, hides inside the Ama-no-Iawato (heavenly rock cave) which causes the sun to be blocked out.  Ofuji depicts the moment when Amaterasu is persuaded to leave the cave, returning the sun to the world.

This is followed by a sequence depicting symbolism associated with Emperor Jimmu – the legendary first emperor of Japan.  Although the imperial house of Japan has traditionally claimed its descent from Jimmu in about 60 BC, most researchers see his tale as being based more in myth than in historical reality.  According to Shinto belief, Jimmu is said to be a direct descendant of the sun goddess Amaterasu.  In addition to the continuing to use the sun motif, this sequence adds symbolism associated with Jimmu: his emblematic long bow and the famous three-legged crow yatagarasu which is said to have been sent from heaven to guide Emperor Jimmu. 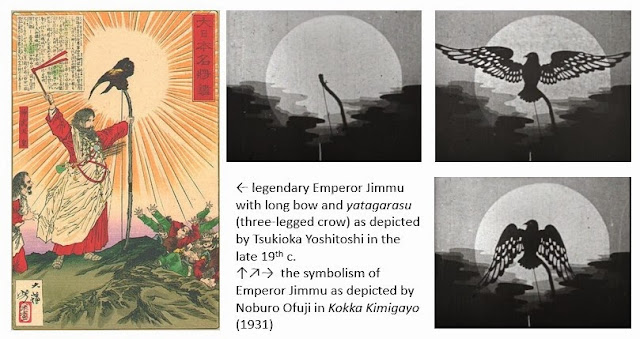 I was struck by the similarity of the dark bird with spread wings to the eagle which is the national symbol of Germany.Of course, Japan and Germany were not yet military allies in 1931 – the National Socialists were not yet even in power; however, film was already being used as a medium to further nationalist ideology in both countries.  During the Meiji period, the government proclaimed 11 February 1966 as the foundation day of Japan and in the 1930s Kigensetsu (Era Day) was celebrated annually as the day that Jimmu ascended the throne.   This was halted for a time when Japan lost the war but since 1966, the date continues to be observed as National Foundation Day but with less fanfare than the overt nationalism of the 1930s and 40s.   According to the Japanese Movie Database, Ofuji’s Kimigayo was released on May 1st, 1931.  Nationalist propaganda was pretty prevalent in Japan at this time because Japan during the run up to the Japanese invasion of Manchuria in September 1931.

In a much more positive connection to Germany, this is the earliest film by Ofuji that I have seen where the influence of Lotte Reiniger (1899-1981) is obvious.  Reiniger started making silhouette animation shorts in the 1910s and her feature film The Adventures of Prince Achmed was released in 1926.  Her films were shown in Japan in the 1920s inspiring both Ofuji and another early animator Wagoro Arai (1907-94), to try their hand at silhouette animation.  The results are simply astonishing, with their films additionally demonstrating the influence of traditional Japanese traditions of kirigami /kiri-e (paper-cutting art) and silhouette/kage-e (影絵/shadow art).

The National Anthem: Kimigayo was made by Ofuji at his independent studio Chiyogami Eigasha. To learn more about Ofuji, check out my reviews of his other films and my ongoing series about the films awarded the prize named in his honour.
Catherine Munroe Hotes 2013