Tokyo University of the Arts Animation at Nippon Connection 2013 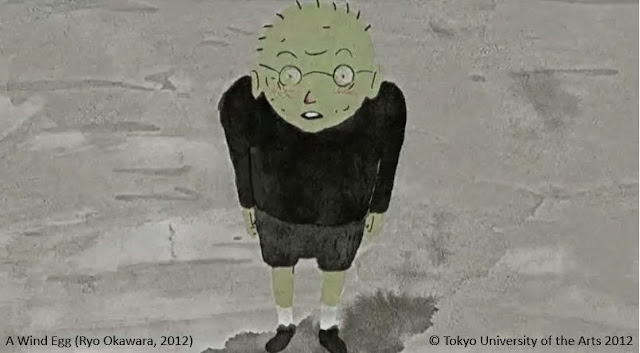 At Nippon Connection 2013, a selection of works by graduate students from the Tokyo University of the Arts (aka Geidai) animation programme was presented by NHK producer and current director of the Geidai Graduate School of Film and New Media, Professor Mitsuko Okamoto.

Although Geidai itself is one of the oldest art schools in Japan, starting off as the Tokyo School of Fine Arts in 1887, the Graduate School of Film and New Media was established in Yokohama in 2005 with its Department of Animation forming in 2008.  Although the animation programme is only 5 years old, they have quickly established themselves as one of the top places in Japan to study animation as students there are given the opportunity to learn from some of the best in the business including world renowned animator Koji Yamamura (Franz Kafka’s A Country Doctor, Muybridge’s Strings) and i.Toon stop motion animator Yuichi Ito (Knyacki!, Winter Days).  Geidai’s students have already found acclaim at animation festivals around the world including Atsushi Wada (In a Pig’s Eye, The Great Rabbit), Saori Shiroki (MAGGOT, Woman Who Stole Fingers), and Ryo Okawara (Orchestra, A Wind Egg).

The Geidai graduate programme only accepts 16 students a year into its 2-year programme.  They have the lofty aim of developing a “new era of Japanese animation” and pride themselves on their dedication to new expression and experimental spirit.  They actively look for students who have originality, are highly motivated, and demonstrate strong themes in their work.  As it is a graduate programme, the students usually come with some animation experience under their belt.  In addition to honing their skills as animators, Prof. Okamoto uses her experience as a producer to teach the students about the business of filmmaking: how to present a plan, how to make a budget, how to create a workable schedule, how to promote one’s film, and so on.

The programme shown at Nippon Connection 2013 demonstrated Geidai’s wide range of styles from hand drawn to computer animation, from the sweet to the surreal.  In the coming weeks I hope to review some of my favourites for you including Aya Tsugehata’s stop motion animation Imamura Store and Ryo Okawara’s A Wind Egg which won the Lotte Reiniger Promotion Award at Stuttgart in June.

The programme that screened at NC2013: