The Restaurant of Many Orders (注文の多い料理店, 1991) Very early in his career as an independent animator, Tadanari Okamoto decided to try out new modes of expression and technique for each of his short films.  From coloured yarn together with paint on glass in Are wa dare? (1976) to painted cedar cutouts in Praise be to Small Ills (1973), Okamoto went to great lengths to match the aesthetic of the animation to the story that he wanted to tell.

Okamoto’s final film, The Restaurant of Many Orders (注文の多い料理店/Chūmon no Ooi Ryōriten, 1991) looks nothing like the 30+ films that preceded it at Echo Productions.  The film is an adaptation of a famous short story by the early Shōwa writer and poet Kenji Miyazawa.  Miyazawa’s writing has been a fruitful source of inspiration to animators, as the fantastic and surreal elements of his writing are well suited to the medium of animation.

Two hunters dressed in British-style hunting gear – one man tall and slender, the other short and stout –  drive furiously into the forest to go deer hunting.  They set off into the woods, dragged along by their hunting dogs.  The dogs chase off after some deer but do not immediately return.  As the men stop for a break, they hear one of the dogs squeal as if in pain.  They run off in search of their dogs and find that they have strangely dropped dead.

A chilly wind blows eerily and foggy weather sets upon the men.  Without their dogs and unable to find their vehicle again, the men grow hungry and weary.  One has the impression that these two could not survive in the wild for long on their own.  Out of the fog, they suddenly glimpse the lit windows of the Wild Cat Restaurant.  They are greeted, not by a host but by a sign which welcomes them in.  It is all very odd, but the men are terribly hungry so they enter.

They ring the bell in the lobby, but again no one appears.  They look around the lobby and discover a shooting game.  After many attempts, the tall and slender man finally “kills” one of the deer in the game.  After much waiting they spot another sign which bids them to enter further into the building.  They encounter a room with a sink where a sign asks them to use the products provided to clean themselves up.  The men are a bit taken aback by this request but imagine it must be a pretty fancy establishment with beautiful women so they do as they are told. 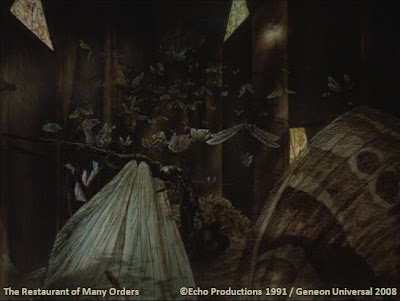 They then enter a church-like space with giant stained glass windows depicting scenes from nature.  A giant spider startles the men and they shoot the glass.  In a brilliantly animated sequence the shards transform into butterflies which overwhelm the men before flying away.  After several more adventures in this labyrinthine building, they do eventually find a table set for dinner in a cavernous room.  But are they really the guests in this establishment or is there a more sinister plot underfoot?

This is my favourite kind of film: one which does not rely upon narration or written text but instead tells a story using visuals only.  The original Miyazawa story did have dialogue, so this is an aesthetic decision made by Okamoto.  The lack of voice-over narration increases the impact of the short notes that the two hunters encounter in the unusual restaurant of many orders.  In addition to the stained glass/butterfly sequence the dancing sequence in which wraith-like women transform into wild cats is also quite remarkable.  The depth of field and the attention to detail in each frame is truly stunning.

For the look of the film, Okamoto wanted to make a 2D film that nevertheless had texture and came up with the idea of having the film resemble a moving copper plate engraving.  In order to achieve this look he asked Reiko Okuyama to join his animation team.  Okuyama had recently retired from Toei Dōga after nearly 3 decades as an animator and had taken up the art of copper plate engraving.  If one compares The Restaurant of Many Orders to the animated short that Okuyama, with the assistance of her husband Yōichi Kotabe, contributed to the collaborative film project Winter Days (Kihachirō Kawamoto, 2003), one can see that Okuyama contributed a great deal to the look of Okamoto's last great work. 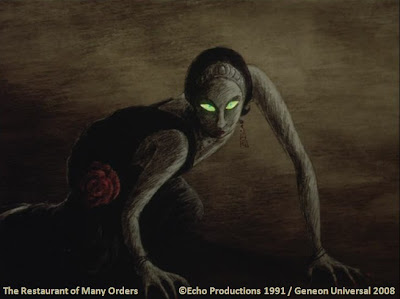 According to Anipages, The Restaurant of Many Orders was intended as a warm up for Okamoto’s first feature-length film which he intended to call Hotarumomi.  Unfortunately, this prolific animator’s future plans were cut short by liver cancer and The Restaurant of Many Orders was left in limbo upon Okamoto’s passing on Febrary 16, 1990.  Fortunately, fellow puppet animator Kihachirō Kawamoto took up the task of seeing his close friend and Puppet Anime-Show collaborator’s final film through to completion.

The Restaurant of Many Orders won high praise from both critics and fellow animators.  In fact, it won a many prizes including the prestigious Noburo Ofuji Award.  Okamoto continues to hold the record to this day for the most Noburo Ofuji Awards won.  Okamoto himself was even awarded a special prize posthumously by the Mainichi Film Concours for his outstanding contribution to animation in Japan.  The Restaurant of Many Orders ranked #115 on the Laputa 150 poll in 2003.

This film is available on the DVD The Collected Works of Tadanari Okawamoto, vol. 3 and in the Box Set (both JP only).  This review is part of my ongoing series dedicated to the Noburo Ofuji Award.

Posted by Cathy Munroe Hotes at 4:23 am