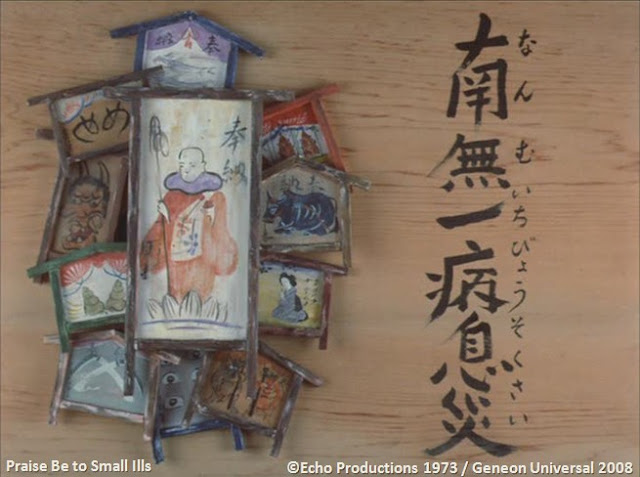 With Praise Be to Small Ills (南無一病息災/Nanmu Ichibyo Sokusai, 1973), Tadanari Okamoto wanted to retell a traditional tale in a way that brings together traditional and contemporary storytelling styles.  Based on the short story by Ryusuke Sato, Okamoto collaborated with the folk singer Kōhei Oikawa to come up with a narration that mixes song and spoken word with a guitar accompaniment.  The sequences vary in style. One narrated sequence is chanted with percussion, while a melancholy sequence depicting a funeral is accompanied by a flute.

The central motif of the film is ema (絵馬):  votive pictures painted or drawn onto small wooden tablets that are hung in Shinto shrines in prayer.  Common prayers today include for success when writing exams, for a safe childbirth, for the recovery of someone who is ill, or for luck in love.  “Ema” literally translates as “horse picture” because of the ancient tradition of giving the gift of a horse to a temple when asking for help from the gods.  Over time, this tradition evolved into the giving of a picture of a horse.  Today, the pictures or writing on the ema vary (see title card at top). 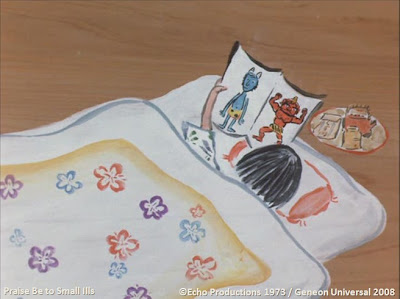 The film begins with a montage of traditionally painted ema.  Kōhei Oikawa then begins to sing in the role of a father telling a bedtime story to his daughter Hiroko.  Hiroko is curled up in her futon bed looking at a picture book featuring drawings of a skinny blue oni (demon) and a powerful-looking red oni.  The father cautions his daughter not to be scared by the tale.

In the story, the blue demon takes up residence in the belly of a humble farmer.  His presence in the man is troublesome.  It causes the man to cough from time to time and brings him bad luck in both farming and hunting.  The man; however learns to live with the oni and in spite of the ill luck the oni brings him, the farmer enjoys a moderate success in life.  He marries well and has many children and he teaches his children to be grateful for the small rewards that come from hard work by giving a prayer of thanks every morning. 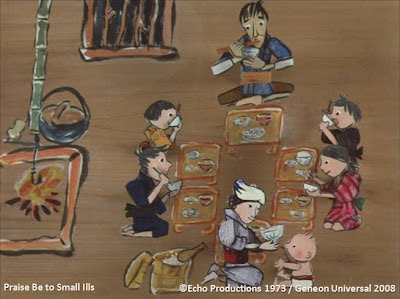 In contrast, the red oni takes up residence on the property of a big, strong farmer.  Initially, the red oni brings the man good luck.  His crops are plentiful and he has much success in hunting.  Rather than give thanks to the gods, the man overindulges by eating loads of rice and sake.  He too marries and has a child but his overindulgence leads to the rather brutal demise of the man and his family.

Praise Be to Small Ills is a morality tale aimed at teaching children the benefits of working hard and being grateful for what they have.  In conclusion, the narrator father sings to his daughter Hiroko that that one should put up with small irritations – represented by the blue oni – in order to enjoy a long and fruitful life.  Overindulgence in the sudden success a red oni can bring will only lead to tragedy. 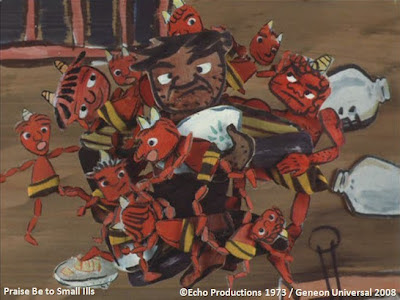 Tadanari Okamoto is famous for using different materials in each of his films.  For this film, the cutouts are made using the wood of the what the Japanese call sugi (cryptomeria japonica) – a tree native to Japan.  The cryptomeria is sometimes called the Japanese cedar in English although it does not belong to the cedar family.  Sugi is the national tree of Japan and is commonly seen in temples and shrines.  The wood of the cryptomeria was chosen for Praise Be to Small Ills because it is traditionally the wood of choice for making ema.  It gives the characters a sort of roughly hewn look unique to this film.

As with all Okamoto animated shorts, the film has been flawlessly put together.  I would personally hesitate to show the film to the young children for whom the moral message was intended because of the violent death of overindulgent man.  However, it is quite a useful film for teaching older children about Japanese folk tales and religion.

This film won the Noburo Ofuji Award for 1973: Okamoto’s third of seven wins of this prestigious award.  Kōhei Oikawa  also features in another of Okamoto’s Ofuji award-winning films: Towards the Rainbow (虹に斑って, 1977).  The film appears on Volume 1 of the Okamoto Box Set (JP only).