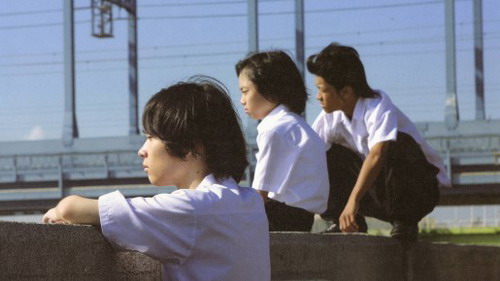 This above all: to thine own self be true,
And it must follow, as the night the day,
Thou canst not then be false to any man.
- Polonius, Hamlet I,iii, 78-9

Polonius` words of farewell to his son Laertes in the first act of Hamlet sum up the moral message of director Fujirō Mitsuishi’s live action adaptation of Hiromi Morishita’s award-winning manga Osaka Hamlet.  The film intricately intertwines the coming of age stories of three brothers – Masashi, Yukio, and Hiroki Kubo beginning with the death of their deadbeat Dad.  Embarrassingly, their mother (Keiko Matsuzaka) does not appear to be in mourning at all and even more worryingly, their long lost Uncle Takanori (Ittoku Kishibe) moves into the house and tries to make himself useful.

There could not be three more unalike brothers than the Kubo boys.  The eldest, Masashi (Masahiro HIsano), is a quiet, bookish type who is inspired to boldly come out of his shell when falls head over heels for a beautiful, wayward older woman he meets by chance.  In order to get to know Yu-chan (Natsuki Kato) better, he poses as a college student and even humours her cringe-worthy father fixation.

The middle brother, Yuki (Naoyuki Morita) is a thug who bullies others and seems to enjoy getting into violent scraps with other thugs.  When he hears that the geek of the school has called him “Hamlet” he is at first offended because another kid at the school has a hamster named "Hamlet".  Upon threatening the young man over the perceived insult, he learns about the play by Shakespeare and is actually interested enough to take his first book out from the library.  At first, he cannot comprehend the language in the play, and has another outburst when he discovers Hamlet’s unusual relationship with his mother.  The most interesting part of Yuki’s character development is how he comes to terms with Shakespeare’s text.  Another Shakespearean element to Yuki is his capacity for extreme violence which recalls some of Shakespeare’s bloodier plays (ie. Mercutio vs. Tybalt in Romeo and Juliet).

The youngest brother, Hiroki (Tomoya Otsuka), is coming to terms with the fact that he would rather be a girl.  His family is remarkably understanding – even the thug Yuki whom one could imagine harassing people for being different.  “Koki” sports an androgynous haircut and wears a pink T-shirt.  The one person he identifies with most is his Aunt Aki (Manami Honjo) who is in the hospital with cancer.  Aki is also a bit different and enjoys role play and dressing up in costumes.  Some of the more touching moments in the film come when Koki visits his aunt in the hospital.

Even Koki’s classmates are supportive of him being true to himself.  When they decide to put on a class production of Cinderella, they collectively decide that Koki would be the best to play the lead role and cast a girl in the role of the prince.  The climax of the film comes when the play is put on and poor Koki has to endure taunting from three bullies in the audience as well as bad behaviour from other parents.  This was the most uncomfortable scene in the film as the acting was over-the-top and extremely unlikely.  First of all, it is not unusual in Japanese culture for men to play female roles, and secondly, the dialogue was really unlikely.  It turned an otherwise decent film into a TV sitcom for a few scenes.
The storylines of each of the family members have one thing in common: role play.  Masahi is pretending to be older than he is and role playing the father Yu-chan never had, Yukio has carefully constructed a tough guy façade for himself, and young Hiro-kun is getting to live out his fantasy by playing Cinderella in his school play.  Even their uncle is playing at being a house husband, even though he himself is not sure he is able to fulfil that role in their family.

I saw a special screening of this film hosted by Nippon Connection in Frankfurt.  It is also available on DVD: