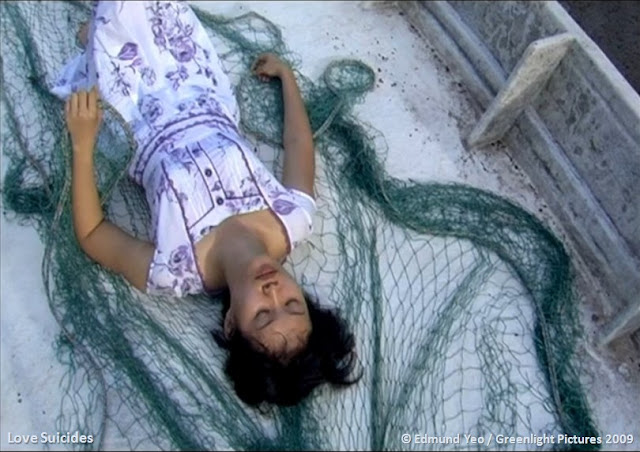 When love goes sour it can bring out the worst in people.  Sounds and gestures which were once held dear transform into irritations for the heart gone cold.  Edmund Yeo’s Love Suicides (2009) tells the tale of a woman (Kimmy Kiew) who has been abandoned by her husband.  She and her daughter (Arika Lee) live a quiet, simple existence near a rice paddy field in rural Malaysia.

The daughter takes pleasure in the few things she has to play with:  she diligently practices on her  woodwind recorder or plays with a red balloon that hangs limply on the string.  Brief letters marked airmail begin arriving from the husband which mysteriously suggest that he can hear every sound the girl and her mother make:

Although the woman and daughter appear to be completely alone, the woman follows her husband’s instructions to the letter.  The daughter says nothing, but her words and actions suggest a growing sense of anger and resentment.  In the excerpt below, the mother is force feeding the daughter because the little girl is not allowed to eat on her own from the porcelain bowl:

There are many ways to read this short tale – the film itself being an interpretation of the even darker short story of the same name by Yasunari Kawabata.  From my perspective, it is a tale of abuse.  The quietness of the film – the excerpt above features the word of dialogue, there is no music and only a few incidental sounds (the recorder, shoes on gravel, the waves on the shore) – intensifies the tension that builds in the film.  It is a tension that leaves unspoken the at worst physically violent and at best verbally abusive relationship that must have existed for this mother to unquestioningly follow out her husband’s cold written instructions.

Cinematographer Lesly Leon Lee (vimeo) has done an inspired job shooting the film in cool colours and dark shadows.  Each sequence is beautifully framed.  The profoundest shot for me was the one of the mother lying on a tangled web of a fishing net.  It is an eloquent metaphor for the situation she finds herself in.

The original short story is one of the many gems contained in the Kawabata The Palm-of-the-Hand Stories collection translated by Lane Dunlop and J. Martin Holman. Love Suicides premiered at the Festival Paris Cinéma 2009 and Yeo won Best Director for the film at the China Mobile Film Festival 2009 and the Doi Saket International Film Festival 2010.  The film was produced by Greenlight Pictures.

This is the second in a series of reviews of the short films of the award-winning Malaysian filmmaker Edmund Yeo (b. Singapore, 1984).  A graduate of Murdoch University in Australia, Yeo has been based in Tokyo since 2008 when he moved there to pursue a Master’s degree at Waseda.  His films have received wide acclaim at international festivals including Cannes, Pusan, and Rotterdam.