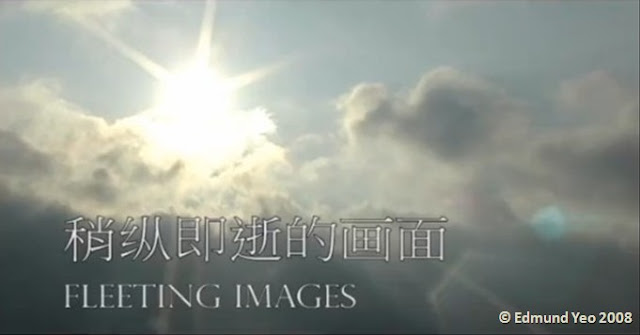 “Time, which changes people,
does not alter the image we have retained of them.”
- Marcel Proust

Cinema grew out of the human desire to capture the fleeting images of our lives in some kind of permanent record.  Image, time and memory were favourite themes of the recently departed filmmaker Chris Marker (1921-2012) and this short film by Edmund Yeo is an homage to Marker’s meditative, poetic documentary Sans Soleil (1983).

Like Sans Soleil, Fleeting Images is narrated by a woman who conveys her interpretation of letters she has received from a close male friend.  The letters are a poetic contemplation of the passage of time and the tenuous strands of fate that connect people of varying circumstances, times, and places together.

Instead of drawing on T.S. Eliot or Racine as Marker did in Sans Soleil, Yeo turns to Proust for inspiration.  Memory is the central theme of Proust’s great work À la recherche du temps perdu (In Search of Lost Time, 1913–1927). Sights, sounds, and smells trigger involuntary memories from the past for the narrator and the novel was groundbreaking in its exploration of how we perceive time. 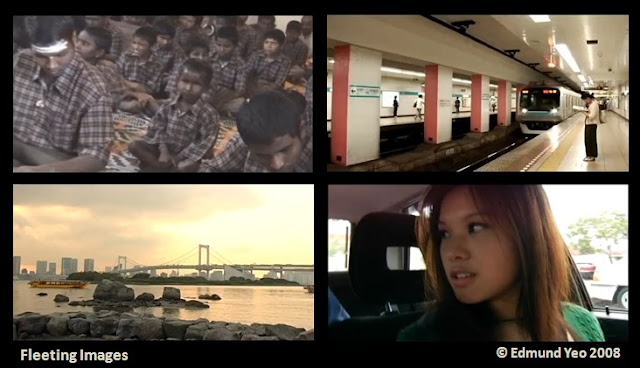 Although Fleeting Images is only 10 minutes long, Yeo manages to capture the essence of his Proustian theme using montages of contemporary images and motifs.  The letters are sent to the female narrator (played by Nicole Tan but narrated by Tsai Yi-Ling) by email, and the life experiences of blind Indian children and elderly Tibetan refugees are contrasted with imagery of the modern streets of Tokyo.  These fleeting images haunt the letter writer as he seeks to understand the world as it is seen by others.  There is a sweet little montage of animation by Julian Kok as the letter writer wonders if the world of the blind children’s imagination could possibly be more colourful than we imagine.

The disconnect that city dwellers have with the natural world is represented in the film with great poignancy when the letter writer despairs of being completely oblivious to the setting of the sun while caught in the swelling sea of humanity flowing through the streets of Shibuya.  The setting sun becomes a motif for the passage of time and it recalled for me the Buddhist notion that impermanence and change are the undeniable truths of our existence.  For the cynical viewer, Edmund Yeo’s Fleeting Images may dip a little bit too far into sentimentality, but for such an early, experimental work by a young filmmaker I think this may be forgiven.

Fleeting Images won the Grand Prix at the CAN CON Movie Festival in 2009 from an international jury which included film critic Chris Fujiwara and director Naomi Kawase.

This is the first in a series of reviews of the short films of the award-winning Malaysian filmmaker Edmund Yeo (b. Singapore, 1984).  A graduate of Murdoch University in Australia, Yeo has been based in Tokyo since 2008 when he moved there to pursue a Master’s degree at Waseda.  His films have received wide acclaim at international festivals including Cannes, Pusan, and Rotterdam.

To learn more about Edmund Yeo visit his official website.