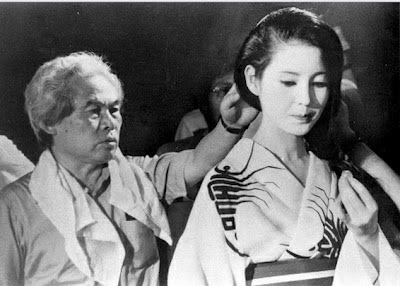 Tributes have been pouring in around the world for Kaneto Shindō (新藤 兼人, 2012-2012), who passed away last week at the age of 100.  In addition to directing 48 feature-length films, Shindo was the author of more than 200 screenplays.  I had the pleasure of seeing his final feature film, Postcard (2010), when it opened the Nippon Connection film festival last month. Read my review here.

Among the many screenplays Shindo wrote for top directors of the past century, including Kon Ichikawa, Keisuke Kinoshita, Yasuzo Masumura, Fumio Kamei, Kōzaburō Yoshimura, and Tadashi Imai, it is not so well known that he wrote a screenplay for a film directed by the great puppet master Kihachiro Kawamoto.  Released in 1981, Rennyo and his Mother (蓮如とその母/Rennyo to Sono Haha) was the first feature length puppet animation directed by Kawamoto.  It is a work that was privately commissioned by a Buddhist organization with the screenplay written by Shindo and the soundtrack composed by Toru Takemitsu.  It tells the story of the historical figure, the abbot Rennyo, who is revered as the Restorer of Shin Buddhism.  The puppet film features the voice talent of top actors such at Kyoko Kishida and Tetsuko Kuroyanagi.  It is screened rarely in Japan, and I have yet to hear of any overseas screenings.

Via social networking, Prof. Aaron Gerow (Yale U) has pointed out that Shindo should also be praised for his contributions to the preservation of film history.  During his life he wrote many books about the craft of writing for film as well as about his observations of the Japanese film industry.  These include his tribute to his close friend and frequent collaborator the actor Taiji Tonoyama (1915-89) called Death of a Third-Rate Actor: A True Biography of Taiji Tonoyama (2000), A Life in Screenwriting (2004), and While I Live: My Personal History (2008).

Sadly, these books have not yet been translated to English, but we can get a glimpse into Shindo’s history in the cinema in his documentary Kenji Mizoguchi: The Life of a Film Director (1975), which he made as a tribute to his mentor.  The best place to get to know Shindo is, of course, through his films.  I have put together a list of 10 films he directed and 2 films that he wrote the screenplays for - films that are, in my humble opinion, “must see” screening for any fan of world cinema. 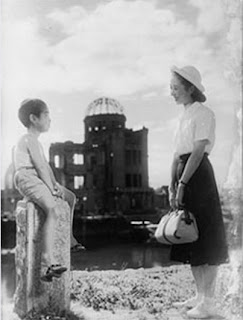 Although it screened at the Cannes Film Festival in 1953, Children of Hiroshima did not get its official release in the U.S. until last year (see A.O. Scott’s NYTimes review).  A deeply moving tribute to the survivors of the atom bomb, it tells the story of a young woman who returns to her hometown several years after the bombing to confront the trauma and suffering of her family and friends.  The film was commissioned by the Japanese Teachers’ Union and based upon testimonies compiled by Prof. Arata Osada.

One of the top Japanese movies of the 1960s, this dialogue free film tells the story of a family of four surviving against the odds on a small island in the Sekonaikai Archipelago.  A film of poetic beauty which won the top prize at the Moscow International Film Festival (1961) as well as a National Board of Review Award (USA, 1962).

Kenji Mizoguchi: The Life of a Film Director
(ある映画監督の生涯 溝口健二の記録, 1975)

A most delightful discovery on the Criterion release of Ugestsu (1953).  With a mixture of film clips, images of the hospital where Mizuguchi was treated in the last days of his life, and interviews of friends, colleagues, and admirers.

A classic horror film based upon a Shin Buddhist parable which Shindo transformed into a cautionary tale about sexual jealousy and unrequited lust.  This was Shindo’s first period film – with its breathtakingly composed landscapes it is much more than just a cult film. 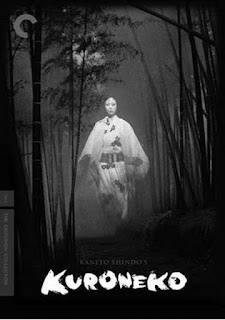 One of the top horror films of the 1960s, Kuroneko is shot in glorious black and white.  An unsettling, highly charged film, brimming with eroticism. It had a good chance at winning an award at Cannes 1968 if the festival hadn’t been shut down for political reasons.  Shindo’s favourite leading lady, Nobuko Otowa, and his cinematographer Kiyomi Kuroda won top honours at the Mainichi Film Concours.

Two of many  feminist themed films by Shindo that have suffered from lack of availability outside of Japan.  Life of a Woman is adapted from the short story “Une vie” by Guy de Maupassant.  Both Life of a Woman and Sorrow is only for Women examine poverty and the suffering of women in modern day Japan.

Based on the true story of the Daigo Fukuryū Maru – the ill-fating Japanese shipping boat that was contaminated by nuclear fallout caused by U.S. testing on the Bikini Atoll in 1954.  A devastating tale of the psychological and social consequences of nuclear testing in the Pacific.  A tragic, but politically significant film.

The final film of Shindo’s favourite leading lady – his mistress turned second wife Nobuko Otowa.  Peppered with references to the plays of Anton Chekov, A Last Note won Best Film at many Japanese Awards shows including the Japanese Oscars, the Kinema Junpo Awards, and Mainichi.  Otowa was posthumously awarded Best Supporting Actress at the J Oscars and the Kinema Junpo Awards.

In this film, Shindo takes a poignant autobiographical journey through the pre-war Hiroshima of his childhood.  A reflection on aging and one’s changing perspectives on one’s own life history.  One of Shindo’s most personal films.

2 Must-See Films with Screenplays by Shindo: 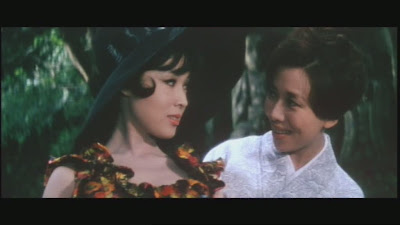 Another Tanizaki adapation about a strong woman – this one is a hard-as-nails fighter who uses her beauty and wits to survive.  Forced into geisha work, she exacts a bloody revenge on the men who desire her.