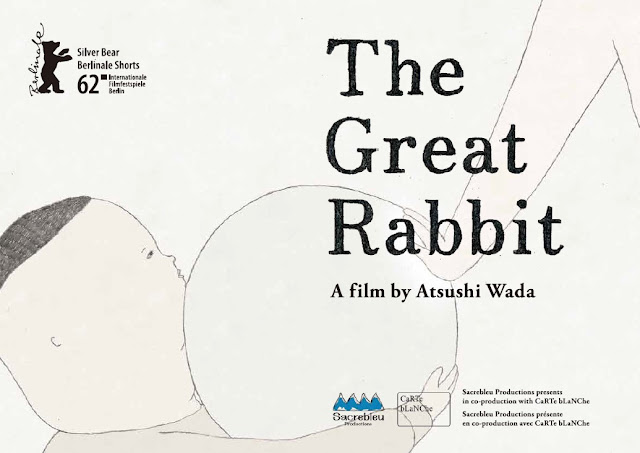 Once we called the noble, profound and mysterious existence The Great.
We have moved with the time, our thought and consciousness has changed.
And yet what makes us still keep calling it The Great?

The Great Rabbit (2012) marks a new development in the career of animator Atsushi Wada, for it is the first time that he has made an international co-production.  It is a co-production between CaRTe bLaNChe (who also represents artists like Keiichi Tanaami, Keita Kurosaka, and other CALF animators among many others) and the French production company Sacre Bleu who specialize in short films.

At Nippon Connection 2012, Wada explained that it was also the first time that he had ever used a sound designer – in this case Masumi Takino who has also done the sound for Ryo Okawara’s latest film A Wind Egg (Kara no tamago, 2012) which is screening this week at Annecy.  Wada told us he was a bit shy initially for it turns out that for many of the sound effects in his films, he strips off and uses his own body (ie. for the sounds of slapping, etc.).

The film opens with a cubby boy in a tight close up, panting with exertion, who carries a giant, ball-shaped egg.  When a hand stops him to push the egg, he covers it with his shirt.  He pauses to  interact with a weasel who has rubbed up against his leg like a cat.  Suddenly a bird swoops down and removes the boy’s shirt and the egg falls silently to the ground.  He looks around as if to see where the egg has fallen, sighs deeply and bends to remove his shorts, his flabby tummy bouncing gently as he does.  He then carefully wraps his shoes up in his shorts and tosses them away from himself.

A rabbit sits on an alter munching on something.  Indecipherable whispers, almost guttural in nature can be heard.

A human-rabbit hybrid stands on a chair with a small, shirtless boy holding the chair steady as a queue of chubby boys – reminiscent of the queue of salarymen having their noses examined in Wada’s Day of Nose (2005) – with giant ball-like eggs approach to have the egg inspected by the humanoid rabbit.  Once the rabbit-man has touched the egg, the chubby boys tuck it under the shirts – the same routine that opened the film but this time in a long shot.

The rabbit-man touches his rabbit ears and we hear a humming.   Cut to CCTV footage of a typical urban alleyway with a time code in the top left corner.  A figure can be briefly glimpsed carrying a giant egg.  A new angle of the playground shows that it is the weasel, with the giant egg tucked on his back held by his tail.  In the third shot, the weasel and his egg are captured in a net on a grassy field.  His captor is a boy sitting on a tree branch, much like the one in In a Pig’s Eye.  The boy licks his lips as though anticipating a feast.  He takes the struggling weasel out of the net, then takes his place inside the net, mimicking the weasel’s movements.

A panting boy walks by with crumbs or shards of some kind on his shorts.  A mother bird with her brood tucked in a shirt is abruptly taken from her perch by a giant boy with glasses and the chicks are made to poke at the bottom of the boy in the net.  The boy falls free of the net to land on the ground next to two small animals staring silently and one of the giant eggs.  He picks up the egg and there is a swish pan to the queue in front of the rabbit-man.

Incoherent whispering, a chubby boy a cloth wrapped over his face gestures and moves strangely, like a blind man trying to find his way through an unfamiliar room.

The rabbit sits at the altar, chews benignly.  Or is everything as it seems?  The frame is rewound and played back slowly and we see hands pushing the weasel inside of the rabbit’s mouth.  A chubby boy with a remote control looks at the TV image off camera and whispers to himself, looking around him as if concerned that someone is watching his every move as well.

There is an irony in calling a rabbit “great” for a rabbit is really such a benign creature.  As herbivores, they do not really pose a threat to anyone except for the fact that they notoriously reproduce at a rapid rate.  At Nippon Connection 2012, Atsushi Wada told us that he randomly chose the rabbit as a central symbol for this film because he started making The Great Rabbit during the year of the Rabbit.

From a Buddhist perspective; however, nothing is random and it is significant that Wada chose a rabbit as the central animal in this film.  To be sure, Wada has shown in previous films to be drawn to animals that are quiet and move in subtle ways.  Because he has often used sheep in previous films, I was reminded in The Great Rabbit of the idiom “the wolf in sheep’s clothing,” for although the rabbit appears to sit and do nothing, except perhaps be worshipped, in the slow motion playback we realize that appearances can be deceiving.

The visual reference to Wada’s earlier film Day of Nose with the men queuing for inspection emphasizes the theme of societal pressures on people to follow the dictates of the ruling elites.  This is heightened by the suggestion that Big Brother is watching our every move through the use of CCTV footage to capture the weasel stealing an egg.  In the wake of 3/11, The Great Rabbit reads like a warning for us not to follow in the dictates of the government or to believe everything we see on the news.  We must follow Atsushi Wada’s example of looking at the subtle clues of movement and gesture, and question the validity of what the powers that be are telling us.

As Atsushi Wada explains: “A situation of disobedience stands only when there is a relationship between a person who forces somebody to obey and a personal who obeys him/her.  Nowadays, the status of relationships between superiors and inferiors, good and evil, aristocrats and commoners is less visible, and it’s becoming more difficult to judge what is right or wrong.  Sometimes we even don’t know what we are forced to obey.”  The Great Rabbit is Wada’s expression of this ambiguity.

When The Great Rabbit won the Silver Bear at the Berlinale earlier this year, the jury commented: “This dreamlike film uses a unique, surreal language to tickle our unconscious while showing us the confusion of the modern world in animated form. Using a delicate hand drawn style, Atsushi Wada decodes reality with absurd sequences of characters caught in time.” (source)

If you live in the Tokyo area, be sure to check out the screenings of The Great Rabbit this summer at Image Forum.


This film screened at: